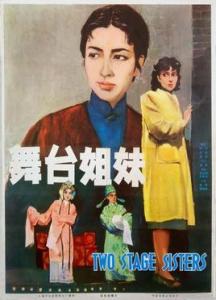 The China Institute‘s Cultural Revolution film series kicked off with a bang the other week with a rarely-viewed Xie Jin (pronounced Sye Gin) film, Two Stage Sisters (舞台姐妹).  All of the films being shown  makes this little series a gem.  But it is the series’ fortuitous timing – with President Xi Jinping’s (pronounced See Gin-ping) recent speech on the arts – that makes it a must see for anyone trying to understand the possible direction China’s arts may take in the future.

Two Stage Sisters, filmed in 1964 during a more open time before the onset of the Cultural Revolution, breaks down any notion that  propaganda films from this time period could not also be art.  The film follows the lives of two Shaoxing opera actresses – Yuehong and Chunhua – as they travel through a turbulent time in China’s history.  The film opens in 1935’s rural China.  Chunhua, who has run away from her in-laws who had plans to sell her, finds herself hiding in the store room of a local opera troupe.  The troupe – run by Yuehong’s father – adopts her and discovering that she has a natural talent for Shaoxing opera, makes her the star of the show along with Yuehong.  Showing the abusive practices of pre-revolution China, after the father dies, the two stage sisters are sold to a Shanghai opera troupe to pay off their father’s debts.

In early 1940s Shanghai, Yuehong and Chunhua become stars.  But slowly, as China begins to change, so does the relationship between the two women.  Chunhua remains the virtuous peasant.  Even when a wealthy patron wants to adopt her as her daughter, Chunhua, ever pure to the art, rejects the patron’s advances.  Yuehong questions Chunhua’s decision and is slowly seduced by the opera troupe’s manager as well as the Guomingdang, bourgeois lifestyle that he offers.  While Chunhua, inspired by Lu Xun’s work, begins to write revolutionary operas, Yuehong retires and fills her life with pearls, furs and diamonds. 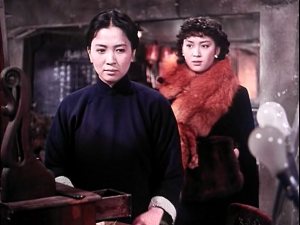 building in every scene.  It is in that melodrama that director Xie Jin excels and makes this film into a masterpiece.   The drama crescendos in an artfully shot courtroom scene that demonstrates that if history did not get in the way, Xie Jin could have been China’s Kurosawa.

But like most things in China, history and politics did get in the way, essentially putting Xie Jin’s career on hold for the next twenty years.  Two Stage Sisters, filmed with the approval of Xia Yan (pronounced Syia Yen), China’s Vice Minister of Culture, was produced at time when Mao Zedong’s power was at its lowest due to the tragic debacle of the Great Leap Forward.  But that period would not last and it is the Cultural Revolution itself that becomes Mao’s plan to regain complete power.

With the start of the Cultural Revolution in 1966, Xie’s film was condemned precisely because it had not been hard enough on Yuehong, the sister that succumbs to materialism.  Xie Jin’s art of portraying even the “villain” in a nuanced and sympathetic manner did not fly during the Cultural Revolution.  For the Red Guards who would begin to rule society for the next few years, Chunhua’s forgiveness of Yuehong came too easy.  For them, Yuehong – an enemy of the socialist state – should have been punished more for her capitalist ways. 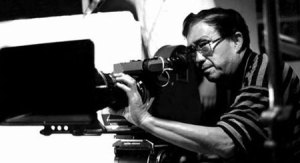 Additionally, produced with the assistance of Xia Yan, a vocal critic of Mao’s Great Leap Forward and a target of Mao’s wife and former actress Jiang Qing, Two Stage Sisters’ condemnation was inevitable.  Soon after the start of the Cultural Revolution, Xia was purged and jailed for the eight years.  Xie Jin would spend much of the Cultural Revolution and what should have been the prime of his career in a labor camp.

Two Stage Sisters, and the history that surrounds it, shows that art in the People’s Republic of China, while ostensibly required to “serve the people” in fact serves the political whims of its leaders.  Given this history, Xi Jinping’s recent October 15, 2014 meeting with China’s artists might be a bellwether for his attempts to tie art not just more to the Chinese Communist Party but more to his rule.  The Cultural Revolution found its origin in Mao’s 1943 speech at the Yenan Talks on Literature and Art.  For Mao, the revolution had two fronts – the arts and the military; there was no such thing as art for art’s sake.  Art and literature were essential for a successful revolution and the Yenan Talks made clear that art and literature needed to extol the masses and propel them forward for greater revolution.  At a point though, Mao noted that with the masses’ rising cultural levels, art standards would have to rise as well.  But the art would still need to serve the people.

Xi’s October 15 speech, while not as obvious, has aspects that are eerily similar to Mao’s 1943 Talks.  According to Xinhua News agency, which summarized Xi’s remarks rather than print them, Xi called on artists and authors to be one with the people and to use their art to promote the Party: “Literature and art must reflect well the people’s wishes; it must persist in the fundamental orientation of serving the people and serving Socialism” (translation courtesy of Rogier Creemers).  Xi also digressed on the need to produce quality works for the masses’ increased cultural awareness.

Will Xi try to dominate the arts the way Mao did during the Cultural Revolution?  Or was this just a roundabout way to state the obvious: even 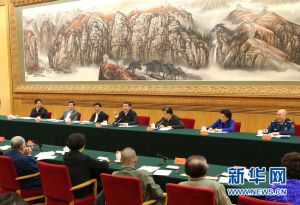 Xi Jinping speaking on arts in literature in today’s China

Chinese people don’t really want to watch Chinese movies and there is a genuine need to improve quality?  Or is it something else?  For sure we won’t be seeing a Cultural Revolution anytime soon.  But if I was an artist, author or director in China right now, with a speech that makes reference to “a hundred flowers bloom and a hundred schools of thought contend (百花齐放、百家争鸣的方针),” I would certainly sit this round of art-making out.  That unfortunately means the arts in China – at least those sanctioned by the state – will continue to stay at its current level.