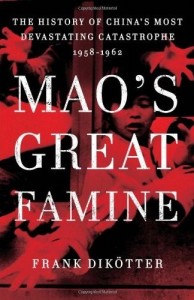 When teaching about China’s Great Leap Forward (1958-1962), my Chinese history professor would remind students that history is not necessarily written by the victors but rather is written by those with the ability to transcribe and communicate their experiences, namely the educated.  A comparison of our knowledge of China’s Cultural Revolution (1966-1976), a campaign largely against the Communist China’s remaining vestiges of wealth and educational elitism, with our knowledge about the Great Leap Forward proves his point.  A simple search on Amazon reveals 20 memoirs, just in English, about the Cultural Revolution.  The number of memoirs on the Great Leap Forward in English?  Zero.  We don’t even know how many people died as a result of one of the worst famines in modern human history (the traditional estimate is 30 million but many believe this is too low).

But Frank Dikötter, in his new book Mao’s Great Famine: The History of China’s Most Devastating Catastrophe, 1958-1962

, seeks to enlighten us on this horrifying period in Chinese history, or as he puts it in his opening sentence when “China descended into hell.”  With access to recently published provincial archives from the time period, Dikötter shows a China when all semblance of a rule of law vanished and society returned to a Hobbesian state of nature.

Dikötter goes deeper than just explaining the misery; instead he seeks to refute many common-held beliefs regarding the Great Leap Forward and hold the Chinese Communist Party, in particular Mao Zedong and Zhou Enlai, directly responsible for the tens of millions of peasants who unnecessarily perished.  For Dikötter the Great Leap Forward is not a famine but rather a genocide on par with the Holocaust and Stalin’s gulags.

Parts one and two of the book – which are perhaps the most interesting – convincingly argues that the highest echelons of power knew exactly what was happening on the ground during the Great Leap Forward and largely didn’t care.  For the leadership, proving to the rest of the world that China had already made the successful “great leap” to an industrialized, rich, Utopian communist society became paramount, even at the expense of Chinese lives.  Mao’s Great Leap Forward began with the complete collectivization of farms, village duties, factories, and most of society.  Dikköter shows that although some in the leadership, most notably Peng Dehui, criticized the rapid drive to collectivization as early as 1959, others like Zhou Enlai who was desperate to return to Mao’s good graces vigorously supported the Great Leap Forward, even with its half-baked ideas of digging crops deeper, smelting steel in backyard furnaces, and building useless irrigation projects that took farmers away from farming the land.

For Dikötter, the leadership’s stupidity was augmented by its arrogance.  To prove to the world that China had 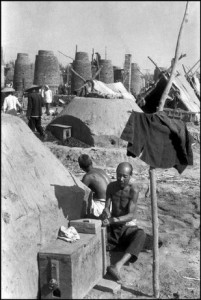 French Photographer Henri Cartier-Bresson visited China during the start of the Great Leap Forward (1958) for Life Magazine. Here is a backyard furnance.

successfully made the transition to communism, Mao didn’t just pressure local leaders to meet agricultural and industrial targets, but to surpass them.  The excess grain and goods were sold, below market value even, abroad.  But in reality, as Dikötter makes clear, there was no excess grain – local cadres lied about the numbers, causing the central government to take what was viewed as excess, but which was largely the sum total of all that a particular village produced.

Dikötter disproves the notion that the central leadership was unaware of the mass starvation.  Instead, Dikötter portrays a leadership that made a choice: instead of returning the grain that it knew would keep people alive, the leadership, at the behest of Zhou Enlai, needlessly sought to pay off China’s international debts through grain’s export.  What is perhaps one of the more shocking aspects of the book, Dikötter goes on to explain that although most of China’s treaties provided 18 years for China to repay its debt, the leadership was intent on paying off all debt by 1965.  Because China did not have cash or bullion, the only commodity it could use to pay off its debt in only 5 years was grain.  For Mao, the choice was simple – “when there is not enough to eat people starve to death.  It is better to let half of the people die so that the other half can eat their fill”  – the image of China that Mao wanted to portray to the rest of the world trumped any local needs.

Mao’s Great Famine, with access to the provincial archives, focuses on the systems in place that allowed the famine to continue as well as the callousness of China’s leadership.  At times, one is left wondering what vestiges of the Great Leap Forward still remain; what is not unique to the time period but instead applicable to the modern-day CCP?  Today, the Chinese government still maintains targets for local cadres, and local officials are desperate to meet these targets, even at the expense of the law.  Prof. Carl Minzner has analyzed the current “cadre responsibility system” especially in terms of forced abortions to meet local one-child policy targets.  See Carl Minzner, Riots and Cover-Ups: Counterproductive Control of Local Agents in China (November 9, 2009). University of Pennsylvania Journal of International Law, Vol. 31, 2009; Washington U. School of Law Working Paper No. 09-11-01. Available at SSRN: http://ssrn.com/abstract=1502943.

Dikötter also describes the increasing politicization of the legal system, or what was left of it after the Ministry of Justice was disbanded in 1959.  “Every one of our party resolutions is a law.  When we have a conference it becomes the law….The great majority of rules and regulations are drafted by the judicial administration.  We should not rely on these….”  Epitomizing this politicalization of the legal system, Dikötter points to the creation of re-education through labor (laojiao), an extra-judicial proceeding where prisoners could be held indefinitely.  Interestingly, China today, even on its alleged quest for a rule of law, has maintained re-education through labor and has largely kept it an extra-judicial, politicized process. 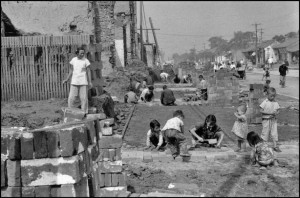 Dikötter’s book is a necessary read to understand the misery that the Chinese people, especially in the rural areas, suffered during the Great Leap Forward.  Its description of the idiocy of the central leadership in caring more about China’s image abroad than the suffering of its own people makes Mao’s Great Famine an important read, especially parts one and two, in any Chinese history class.  But the book itself isn’t a particularly enjoyable read; certainly not a good subway ride book.  The story of the Great Leap Forward is not told in a lineal way; instead, Dikötter breaks up the story by topics, making it difficult to follow the progression of certain events.  Additionally, Dikötter has a large amount of data to share which is impressive indeed.  But at times the constant recitation of numbers is overwhelming and largely causes the reader’s eyes to glaze over.  Dikötter would have done better to add more charts to the book to reflect these numbers.

Finally, Dikötter cites often to two books about Mao Zedong – The Private Life of Chairman Mao: The Memoirs of Mao’s Personal Physician by Li Zhisui and Mao Zedong by Jung Chang and John Halliday.  The veracity of these books, particularly the latter, has been called into question by some academics.  Dikötter’s reliance on these books, particularly when it comes to quoting Mao, is slightly problematic.

But this is a small issue in what is otherwise an important addition to the understanding of the Great Leap Forward and today’s China.  As Dikötter notes throughout the book, the publication of the provincial archives is only the beginning; we will only know the truth when Beijing finally releases the central government’s archives from the time period.  Dikötter implies that this is an inevitably, but given the current political environment, we will likely be waiting a long time.

Mao’s Great Famine: The History of China’s Most Devastating Catastrophe, 1958-1962