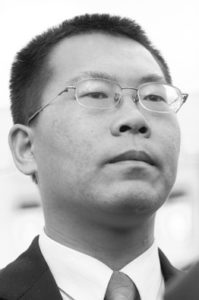 In 1989, Teng Biao was a high school student in the northeastern province of Jilin.  Being  in a rural area far from Beijing, not much about the student protests in Beijing reached his high school, at least not the uncensored information.  It wasn’t until two years later, when he entered Peking University, that Teng Biao would learn the truth about the 1989 student protests on Tiananmen Square and that knowledge would alter the course of his life.   After receiving his doctorate of law in 2002 from Peking University, he became a lecturer at the China University of Politics and Law, one of China’s most presitigous law schools, but he continued as a rights lawyer and advocate.  As a rights lawyer, Teng Biao litigated and represented some of China’s most important civil rights cases, including the Sun Zhigang incident; he served as counsel to rights advocates Chen Guangcheng and Hu Jia, and also worked on overturning a death sentence in the Li Peng case in Jiangsu province. In addition to his individual work, Teng Biao is the co-founder of two important Beijing based NGOs that seek to protect the rights of China’s most vulnerable, China Against the Death Penalty and The Open Constitution Initiative. As a result of his advocacy on behalf of China’s most vulnerable, Teng Biao has been detained many times by the police and authorities in China.

To learn more about how Tiananmen influenced his life, listen to China Law & Policy‘s interview with Teng Biao.

Listen to the Interview with Teng Biao:

Click Here To Open A PDF of the Transcript of the Interview with Teng Biao.