Just for Fun: Oh My Lady Gaga! A Star is Born in…China

Lady Gaga from the Pokerface Video

In just over two years since her debut of “The Fame,” Lady Gaga has come to dominate the airwaves, profoundly impacting pop culture throughout the world.  With her sold-out concerts in New York City this week, China Law & Policy asks the question that everyone wants to know the answer to: yeah, you might be famous in the U.S, but are you big in China?

Mao Zedong once said “the revolution is not a dinner party.”  In China right now, it’s a dance party and Lady Gaga is the DJ.  In malls throughout the country – from cosmopolitan Beijing to the smaller city of Zhengzhou –  the addictive beats of Lady Gaga’s  electro-pop boom incessantly.   And China’s youth adores her, at least the ones I talked to.  They might not understand all the words to her songs but they get her message – “different”, “unique”, “rebellious” – all adjectives used to describe her by the students I interviewed. 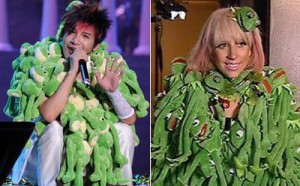 Lady Gaga’s videos and music are just as popular in China as they are in the U.S.  And as in the U.S., her fashion has sparked imitation across China.  Because it is bizarre, Lady Gaga’s style is copied by Chinese pop stars in a sort of homage to her (click here for a side-by-side comparison montage).  Average people want to achieve her style as well.  On China’s nationally syndicated talent show “Ni Zui You Cai” (“You’re the Most Talented”), dance performances to her music are common (check out this number to “Poker Face”) and when judges on the show compare a singer or dancer to Lady Gaga, the audience explodes in a raucous of cheers, excited just to hear her name.

In fact, Lady Gaga is so popular right now that her name is barely ever translated into Chinese characters, much to the chagrin of Chinese officials (if it is translated, it is usually translated as 雷帝嘎嘎 (“Lei Di Ga Ga”), meaning “Thunder Emperor Gaga”).  Even for Michael Jackson and Madonna, their names are almost always translated into Chinese characters.  But for Lady Gaga, her English name is not only brazenly used by the Chinese youth but has become a part of Chinese slang; nowadays, Chinese young people no longer use the phrase “Oh My God” to express surprise or amazement; instead internet chat rooms and regular conversations are filled with “OMLG!” – “Oh My Lady Gaga!”

I get why Lady Gaga is popular in China.  She’s so deliciously “plasticy” – her music and her fashion – and plasticy is big in China.  The drama that she brings is also attractive to a culture where “melodrama” does not carry a negative connotation. Her music videos like “Paparazzi” and “Telephone,” with their overly emotional acting and vindicated female characters, are more like a Chinese soap opera than anything you would see in America.

But there has to be something more than just the plastic melodrama.  If that is all it took, Lindsay Lohan or Paris Hilton would be huge in China (they are not).  So what is it about Lady Gaga that she appears to be the biggest star in China right now?  I’m no expert on pop culture, so I sat down and discussed the issue with my friend and self-proclaimed Gaga expert, Tom Cantwell.  “She’s popular in China because she is accessible” says Tom.   Her music is simple-lyric dance music with addictively catchy beats behind the simple words (“bang bang, we’re beautiful and dirty rich” with a beat supporting each word).  That’s the appeal of dance  music – its simplicity – and also what makes it universally loved. Think about it, there is a reason why Wham!, the British dance duo, was the first Western music group to perform in China back in 1985 and why someone like Jay-Z, with his more intricate melodies that are purposely off the beat, is not widely popular outside of a small hip-hop fan-base on the Mainland.

Tom went on to say, “Yes, her music is accessible but so is her fashion.”  Accessible?  She wears no pants half of 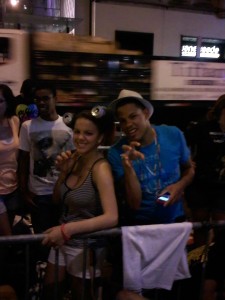 the time and muppets the other half.  “Of course.”  As Tom explained, someone like Beyonce, who is beautiful and dresses in the highest of fashion, is absurdly inaccessible for the average person in both the U.S. and China.  But Lady Gaga creates outfits, making her fashion style achievable with some imagination.  “I can just imagine a Chinese girl in some factory town, inspired by Lady Gaga, putting tin cans on her head” Tom said.

That sentiment was echoed in my conversations with the Chinese young people I spoke to.  While everyone mentioned Lady Gaga’s music, what they really stressed was her fashion.  Although each mentioned that Chinese culture was still too traditional for Lady Gaga’s fashion to be widely copied in China, there was a tinge of envy in their voices, one young man even commenting that he looked to others to have the “courage” to copy her style.  And that’s what is most interesting about this Lady Gaga phenomenon in China; for all the talk in the West about the Chinese youth not being taught to be “free thinkers,” their love for Lady Gaga demonstrates that they do have an independent streak in them.  One that appreciates and respects differences and the absurd.  And just good, fun dance music.

6 Responses to “Just for Fun: Oh My Lady Gaga! A Star is Born in…China”