The NY Times Overreacts to U.S. Arms Sales to Taiwan

In yesterday’s New York Times, Helene Cooper argued that the Obama Administration’s recent announcement of over 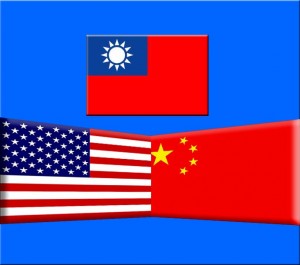 $6 billion in arms sales to Taiwan shows a “new toughness” toward Beijing and perhaps even a “fundamentally new direction” in the Administration’s China policy.  But, by focusing on the arms sales, Ms. Cooper overemphasizes the event.  U.S. arms sales to Taiwan are far from novel or tough, and some may argue, periodically required under U.S. law.

Similarly, Beijing’s angry reaction was predictable.  In fact, for each prior Administration’s arms sales to Taiwan, the Chinese government has responded in much the same way: postponement of military-to-military meetings, issue formal protests with U.S. officials, and saber-rattling for the domestic consumption.  However, Beijing’s recent threat of sanctions against U.S. companies involved with the arms sales is new and serious.  But this is more a reflection of China’s growing confidence and less a reflection of a changed or “tough” U.S. policy toward China.

Why Does China Care so Much about Taiwan?  Isn’t it a Separate Country?

Nope, scrap that vision from your mind.  Taiwan is not a separate country, at least not in the eyes of the Chinese, Taiwanese or U.S. governments.   The People’s Republic of China (a.k.a. the mainland) views Taiwan (a.k.a. “The Republic of China”) as a renegade province and any relations between Taiwan and other countries is viewed as interference in the mainland’s domestic affairs.  While Taiwan has largely developed as an independent society, it agrees with the mainland’s assessment that there is only “one China.”  The Taiwanese government has never called for independence and the Kuo Min Tang party (pronounced Gwo min-dang and a.k.a. “the Nationalists” or KMT), which has ruled Taiwan for most of Taiwan’s separate existence, also espouses the view of “one China” and that eventually, the mainland and Taiwan will reunite.  The difference is who rules this reunited China.  For Taiwan, it’s the KMT; for the mainland, the Chinese Communist Party (CCP).

All of this stems from World War II.  After the War ended in 1945, the KMT and the CCP resumed their civil war, a civil war that was put on hold to fight the Japanese invasion from 1937 to 1945.  By 1949, the CCP’s victory was certain and the KMT government fled to the province of Taiwan to continue the Republic of China. 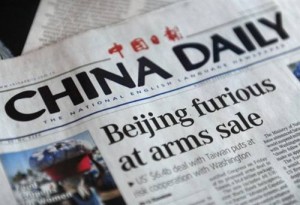 Thus began the baffling existence of two Chinas – the communist People’s Republic of China on the mainland and the KMT’s Republic of China on Taiwan.  Each China claimed that it was the “official” and “rightful” China and the other a mere province; each forced the international community to recognize only one China – either China on the mainland or China on Taiwan – hence the birth of the “one China” policy.

The U.S. continued to ally itself with the KMT and the Republic of China, recognizing Taiwan as the official China and all but denying the existence of the mainland.  But starting in 1972, with President Richard Nixon’s historic visit to the mainland, relations between the U.S. and the PRC began to improve and in 1979, the U.S. switched recognition of China from Taiwan to the mainland.

Obama’s Arms Sales to Taiwan Is Par for the Course in U.S.-China Relations

The Obama Administration’s recent announcement of arms sales to Taiwan follows a long line of arms sales by the U.S.  Almost every president since 1978 has sold arms to Taiwan.  In fact, the U.S., under the 1979 Taiwan Relations Act (TRA), is required to sell defensive arms to Taiwan.  In 1979, after changing recognition to mainland China, the U.S. did not want to leave its former ally completely open to attack or takeover.  As a result, Congress passed the TRA.

The TRA authorizes quasi-diplomatic relations between the U.S. and Taiwan.  For example, instead of having an official embassy on Taiwan, the TRA allows for the “American Institute in Taiwan.”  Additionally, and more importantly, the TRA established the U.S.’ responsibility toward Taiwan if it is threatened.  At issue here is the TRA’s requirement that the U.S. periodically sell defensive arms to Taiwan.

In announcing arms sales to Taiwan, the Obama Administration is merely following its obligations under the TRA. 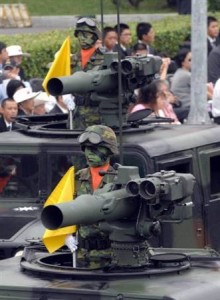 The F-16s are a big issue since they are not “defensive” arms; Beijing would very much view a sale of F-16s to Taiwan as going a bit too far.  But Obama’s package to Taiwan merely includes the usual: Patriot missiles, Black Hawk helicopters, mine-hunting ships and information technology.

If the Obama Administration wanted to use the Taiwan arms sales requirement to “toughen” its stance to Beijing as the New York Times claims it has, the Administration would have acquiesced to Taiwan’s request for F-16s.  Instead, it merely sold similar arms to Taiwan that President George W. Bush sold in 2008.

This is not to say that the Obama Administration does not have a strong China policy.  Secretary of State Hillary Clinton’s recent policy speech on internet freedom was a robust critique of countries like China that censor their internet and partake in cyberhacking.  This follows President Obama’s strong and public criticism of internet censorship while in China this past November.  The New York Times would have done better to focus its argument on the Administration’s novel and forceful rhetoric on internet freedom vis-à-vis China.

China’s response to reports that the U.S. will sell arms to Taiwan has been swift, with an official response 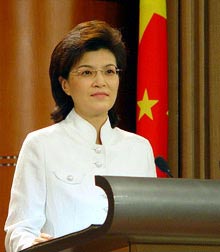 coming within 24 hours of the first U.S. news articles.  As reported in the English language edition of the state-run Global Times, Chinese Foreign Ministry spokeswoman Jiang Yu (pronounced Geeang You) not surprisingly reiterated China’s strong opposition to arm sales to Taiwan and called on the U.S. to stop its intended actions.  China’s response offers an interesting glimpse into how the government and the Party often use the media to respond to crises.

In reporting on the proposed U.S. arm sales to Taiwan, the Global Times continued with this Jekyll and Hyde approach, providing more detail in their Chinese language edition.  Below we translate one of two (and the more interesting) articles that appeared in Friday’s Global Times.

The Global Times, an uber-nationalist newspaper, has very strong connections to the Chinese government and the Chinese Communist Party and at times, the CCP uses the Global Times to inform the public on the subtleties of some of their policies (see Susan Shirk, China: Fragile Superpower, p. 86-87).  Thus, the Global Times is not objective journalism; in reporting on international issues, it is communicating the views of the Party.  Because it is the mouthpiece of the Party, the article translated below shows the Chinese government’s likely response to U.S. arm sales to Taiwan, and it does not look particularly good for the U.S. if it should go forward with its plan.

The Experts: If the U.S. Sells Arms to Taiwan, it Must Face Strong Retaliation and Sanctions from China
The Global Times (Chinese Edition) – Click Here for original article
December 11, 2009
Translation by China Law & Policy

According to a December 9 Reuters news report, an American government official leaked publically the Obama Administration’s new plan to sell arms to Taiwan, including a plan to sell submarines and black hawk helicopters.  The American State Department as well as the Defense Department have been unwilling to discuss this news, but the media generally been stating that American arms sales to Taiwan “is now only a matter of time.”

China military expert Dai Xu [pronounced Dye Sue] believes that China must oppose arm sales to Taiwan and make those countries who sell arms to Taiwan pay a serious price.  He personally recommends that China should continue verbally protesting the U.S.’s actions and should also include some sort of substantive retaliation – an eye for an eye – sell arms to the U.S.’s latent opponents.  National Defense University Professor, Meng Yangqing [pronounced Mong Yang-ching] believes that China has never harmed the U.S.’s core interests, but America, by selling arms again to Taiwan, has harmed China’s core interests; the U.S. should not take China’s past conciliatory response [to arm sales to Taiwan] as a sign of weakness or cowardness.  This time, China should not just use strong language and diplomacy to respond, but should also conduct actions of retaliation and sanctions.

China’s People’s University Professor Jin Canrong [pronounced Gin Tsan-rung] believes that if the U.S. sells arms to Taiwan, then China should certainly seek to retaliate and sanction the U.S.  In regards to military affairs, China could cut off military relations.  For the U.S., that would be a very difficult situation.  Of the world’s six strongest militaries – the U.S., Russia, China, Europe, Japan and India – the U.S. knows’ the inside story on the Russian military, it controls the European and Japanese militaries, looks down upon the Indian military, but is the most worried about China’s People’s Liberation Army (PLA) and the U.S. most urgently wants to better understand the PLA.