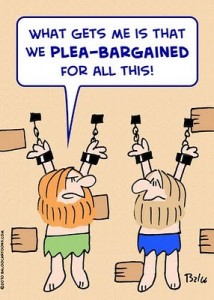 As China Law & Policy reported last week, the guilty verdict issued against Gu Kailai for the murder of Neil Heywood came as no surprise, even with the slim evidence – much of it hearsay – presented at the August 9th trial.

One central piece of evidence at the eight hour trial was Gu’s own confession.  According to the Chinese state-run media, Gu openly confessed to intentionally killing Heywood.  But for some, this raises the question – do you need to have a trial at all if the defendant confesses?  Can’t she just plea to the murder and avoid the trial?

But does China even have plea bargaining?

In the adversarial system – where the prosecution and the defense battle it out to ultimately determine the truth and the judge plays a more passive role – plea bargaining has its place.  But in an the inquisitorial system – where the judge plays an active role in determining the facts – plea bargaining is not as openly accepted.  But criminal justice systems in civil law countries suffer from the same demands – too many case, too few lawyers and too little time.  As a result, even countries like Germany have developed a type of plea bargaining.  In Germany today, a remarkably high average of 20% to 30% of all convictions are the result of a confession.

In China, the story of plea bargaining has taken a similar path.  Innovation has come from the bottom up and its increasing use is a response to

Bargaining in the market - same as bargaining justice?

the exploding criminal caseload in most courts.   Beginning in 1996, with the first amended Criminal Procedure Law, China first introduced Summary Procedure – a form of plea bargaining where the trial is reduced in cases where the defendant confesses and agrees to summary procedure.  Under the 1996 CPL Summary Procedure could only be used in “minor” criminal cases, where the sentence was limited to three years or less.

Summary Procedure is Not Allowed in Death Penalty Cases

Gu Kailai could not avail herself of Summary Procedure because the CPL does not permit the use of such procedures in capital cases.  The 2012 CPL Amendments don’t specifically spell this out.  Instead, Article 208 limits the use of summary procedure to those cases within the jurisdiction of the basic-level people’s court (基层人民法院).  However, under Article 20 of the CPL, the intermediate people’s court (中级人民法院) has jurisdiction in the first instance of all cases punishable by life in prison or death.

As a result of these two provisions, Gu Kailai, even if she wanted to use Summary Procedure, could not as her case was heard in an intermediate level court, and not a basic level court.

Summary Procedure Does Not Eliminate the Trial

But even if a crime is eligible for Summary Procedure, there is still a lot more judicial oversight than what you would see in the U.S.  This is a remnant of China’s civil law system where, due to the central role of the judge, the defendant cannot avoid a trial just by admitting guilt.

Under Summary Procedure, the “trial” is not eliminated, just shortened.  The judge will still review the prosecution’s file, call the parties to court, allow the parties to argue certain points and provide the defendant with the last word prior to judgment.  Under the current amendments, someone from the prosecutor’s office should attend the Summary Procedure trial.  This is an important change from the prior CPL which permitted the absence of the prosecutor, demonstrating that Summary Procedure is not just some rubber stamp of the defendant’s confession.  Cf. 1996 CPL Article 175 with 2012 CPL Article 210.

Thus, even if Gu’s trial was not a capital trial and she was able to avail herself of Summary Procedure, much of what was seen in court – the presentation of some evidence, her confession as the last word – would still have occurred.

In addition to death penalty cases, the 2012 CPL Amendments list other situations where Summary Procedure is not prohibit.  Not surprisingly, in cases with a vulnerable defendant (blind, mute, deaf, or mentally ill) or in cases where there are multiple defendants and not all defendants have confessed.  See CPL Article 209(1) & (3).

But the 2012 CPL Amendments limits the use of Summary Procedure in one additional instance: where the case has a strong societal impact.  See Article 209(2).  This exception did not exist in the 1996 CPL articles governing Summary Procedure.  In adding this exception, it appears that the Chinese government acknowledges the potential political use of certain criminal trials.  Not surprisingly, that appears to be what happened in the case of Gu Kailai.