What’s Up with LGBT Rights in China? 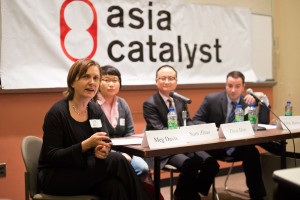 Featuring two on the ground LGBT activists – Sam Zhao (co-founder of China’s only lesbian magazine) and Dan Zhou (a Shanghai lawyer who has taken on some hard-hitting LGBT rights cases) – and John Balzano, a law professor and China expert who provided a more macro view of the movement, the talk broke down some common assumptions about China and the development of individual rights.

Zhou started his talk stating that this discussion was a “queer event” – although talks about Chinese legal development are common, Zhou noted that rarely if ever do these talks discuss LGBT rights development.  But while true, what was perhaps most queer about the talk was learning of the Chinese government’s response to the LGBT rights movement.  Usually the narrative at many of these rights development talks are the same – an authoritarian government trampling over individual rights, fearful that its monopoly on power will be destroyed by such nascent rights movements.

But for LGBT rights, the story seems to be different.  Zhao made a joke about how in 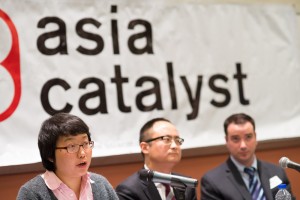 1996, a friend called her, excitedly telling her to return to Beijing because there was going to be a “big” lesbian party – eight lesbians were getting together.  Fast forward a little over a decade and in 2008, Zhao helped organize a two-day lesbian independent film festival where 600 lesbians attended.

What was interesting about Zhao’s story was the fact that the Chinese government even allowed the film festival, and not because it necessarily has an anti-gay bias.  Usually, when movements get too large, the Chinese government sees the movement – be it LGBT rights activists organizing a film festival, rural villagers decrying the taking of their lands, or factory workers protesting inhuman working conditions – as an alternative source of power and threat to its rule – events are broken up and email listserves are shut down.

But both Zhao and Zhou discussed the success they have had in creating an LGBT community throughout China, with much of this success a result of the internet.  Even Balzano noted that while it is true that when movements in China get too large, too overt or too public, the government seeks to crack down, the LGBT movement thus far has not faced the same kinds of pressure. 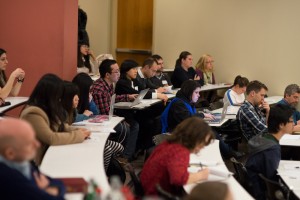 Zhou did point out that the LGBT rights movement is not completely immune.  In 2012, some LGBT rights bloggers held a successful conference in a southern city that many activists attended.  When they tried to re-create the event in Beijing, the government put a stop to it.  But according to Zhao, when the activists asked the Beijing government if the reason was because the event was about LGBT rights, the government said no.  According to the authorities, the basis for denying the activists their conference was because it bordered upon a “mass incident” which the law forbids.

But not everything is rosy for LGBT individuals in China.  While Balzano remarked that there is no law in China that is overtly discriminatory toward the community, the law is still used at times to harass LGBT individuals.  Zhao confirmed this, noting the difficulty in obtaining the proper government approvals for her lesbian film festival because many officials equated lesbian film with pornography. 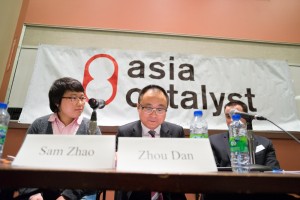 private place, what is still up for debate, at least with some government officials and courts, is what is private.  There have been cases where a hotel room is considered public or a bedroom in an apartment that serves as a business office during the day.  Zhou also discussed the prosecution of one of his clients – a gay D.J. who was part of a party in a gay nightclub.  He was taken in for “lewd” behavior.

Finally, although only briefly touched upon in the talk but much more fully fleshed out in the readings that Asia Catalyst and the Leitner Center diligently selected (see “Resources” list below) is the societal pressure that all Chinese face but is more acute in the LGBT community – parental pressure for a heterosexual marriage and a grandchild.  All of the reading went into depth on this issue, noting that traditionally in China, homosexual conduct has been tolerated so long as that behavior is more “on the side” of a heterosexual marriage that produces children (in this regard, Balzano’s article made an important distinction between traditional acceptance of homosexual behavior and not necessarily homosexual identity).  This pressure and to some degree behavior is still very much present in the LGBT community in China (the Kam article interviewed a number of Shanghai lesbians to ascertain how they deal with the heterosexual marriage issue). 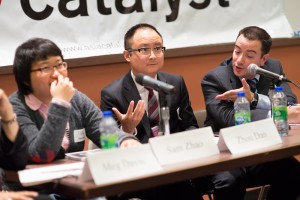 Although China’s LGBT community is still in greater need of protection, especially since vague laws are arbitrarily used to harass some individuals, its movement appears to be on more solid footing than other rights groups.  By the end of the talk, Zhou’s initial remark – that it is queer that discussions of LGBT rights rarely happen – made one wonder, why isn’t Western China watchers especially those who focus on and seek to promote civil society development, examining China’s LGBT movement more.  The LGBT rights movement is an outlier in the normal course of civil society development in China.  What is it that allows it right now to be a bit more immune to traditional government pressure?  And is there anything other movements can learn from the LGBT rights movement?  China’s Comrades proved that more a deeper understanding of the LGBT movement are necessary.

If you are interested in learning more about Asia Catalyst, its events or how you can support this on-the-ground organization, please visit its website here.  For its Fifth Anniversary Campaign, Asia Catalyst’s Board of Directors has generously offered to match all individual gifts donated in 2012 (up to $8,000).  All donations are tax deductible.