It’s All Wrong, But It’s Alright: Women in Today’s China 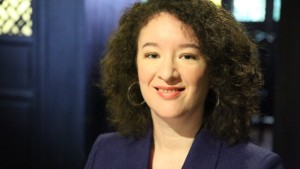 The opening of China to market forces in 1978 unleashed tremendous benefit for the Chinese people – raising hundreds of millions out of poverty, establishing China as the world’s second largest economy.  But it has witnessed a lot of bad – enormous environmental degradation, rampant corruption, and severe income disparities.  Unfortunately, one negative effect has gone less noticed: the declining status of women in Chinese society.   In emancipating women from traditional roles, Mao Zedong once proclaimed that “women hold up half the sky.”  But as Dr. Leta Hong Fincher has revealed in her new book, Leftover Women: The Resurgence of Gender Inequality in China,

today, women don’t even hold half of the deed to marital property.

In an interview conducted in July 2014 with China Law & Policy, Fincher explained how women – through the pressure to marry at all costs – have been excluded from one of the largest accumulations of wealth in the history of the world: China’s hot real estate market.  And as Fincher shockingly explains, this phenomenon is not merely an accident of China’s growth.  It is very much an intentional government policy.  (Note that posting of this interview was delayed as a result of CL&P’s backlog)

Read the transcript below of Part 1 of this two-part series or click the media player to listen to the podcast.

Please come back tomorrow to read or listen to Part 2 of this interview.

. Can you explain more what this is; when the concept first came about?

LHF: The term leftover women or shengnu (剩女) was defined by the All-China Women’s Federation in 2007 to mean an urban professional woman over the age of 27 whose still single. And the same year, China’s Ministry of Education adopted the term as part of its official lexicon. Ever since 2007, China’s state media has very aggressively disseminated the term through its news reports, columns and commentaries. And you also see a lot of cartoons insulting single, urban educated women in their 20s; basically sending the message that these women are too ambitious they should stop focusing on their careers and they should instead look for a good husband before time runs out and they remain single forever.

EL: So you mention the state-run media promoting this and that also that this was a term created by the All-China Women’s Federation which is a government-backed organization. So is this an intentional concept that the Chinese government is pushing on women and if so, why?

LHF: I think there is no question that it is a deliberate campaign. If you look at the news reports that Xinhua put out in 2007 and 2008, there are quite a few of them that re-appear over and over and over again over the years and are still re-appearing even in 2013 with only slight changes in the wording. And maybe they will change the picture. 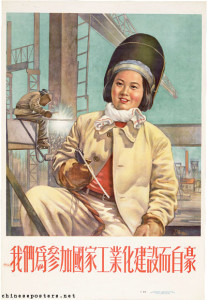 “Participating in the establishment of an industrialized nation makes us proud”

So there’s no question that the Propaganda Department wants to get these reports out and is pushing them out continuously. When I looked into the origins of the term, I noticed that in January 2007 China’s State Council issued a population decision which was a very important statement about what they called unprecedented population pressures facing China in part because of the sex ratio imbalance which they described as a real threat to social stability. And they said that China has a problem of so-called low quality of the population which would make it very difficult for China to compete in the global marketplace. So they set a key goal of so-called upgrading population quality. This term “population quality” or [renkou] suzhi (人口素质)can refer to a complex mix of superior genetic make-up, education, a more nurturing environment. The women who are being targeted in this leftover women media campaign are precisely the women who are considered to be of highest quality. So I argue that this campaign is in part an effort to get these highest-quality sort of speak women to marry and have a child for the good of the nation.

EL: In your book, you talk about the leftover women and then you tie that concept to the current property market. You argue basically that because of the fear of being leftover, the women end up losing the opportunity to gain from one of the largest accumulations of wealth in Chinese history which is basically the current urban real estate market. Can you explain that tie a little clearer?

LHF: First of all, there are a lot of complicated dynamics that go into home buying in China. So marriage is inextricably connected to home buying in contemporary China. Along with very intense marriage pressure there is also intense pressure to buy a home. The norm is that the man is supposed to be the official homeowner and there’s a lot of propaganda, real estate developer advertisement and online matchmaking advertisements all perpetuating the notion that a man must own a home in order to attract a bride. And they also spread the notion that Chinese women will refuse to marry a man unless he owns a home. 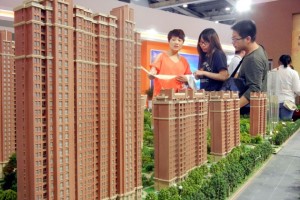 daughters. Women are shut out of property accumulation first of all because their parents tend not to support them in anyway. These homes are too expensive for young people to buy on their own. If your parents are not helping you then you’re really stuck. So the women that I’ve interviewed who are in their 20s and have a boyfriend and they’re thinking about marriage, they often will take their life savings and transfer it to the boyfriend to finance the purchase of a home which is then only registered in the man’s name. These women who are extremely educated and very, very intelligent and sophisticated and they actually want economic independence and they say that they actually want to own their own home.   But then I ask them, well then why when you are buying this marital home, why aren’t you putting your name on the deed?

A lot of them say that it’s simply because they are at the age where they’re considered leftover. Which can start as early as even before 25 years old. Some women can already start feeling that way. So they’re very anxious to get married. They’re own parents are pressuring them to get married. They’re certainly coming under a lot of pressure from the media. They’re coming under pressure from their teachers, the educational system, and their own doctors who tell women in their 20s that they really need to have a child in their so-called best child rearing years which is before the age of 30. Even doctors tell them that if they wait until past 30 to have a child, there child will have a birth defect.

So there is intense pressure on these women to marry because they genuinely believe that time will run out for them. These women, when it comes down to it, are very often unwilling to walk away from an unequal arrangement even if they really want that. And in most cases they do want equality. But the pressures against them are just so intense. 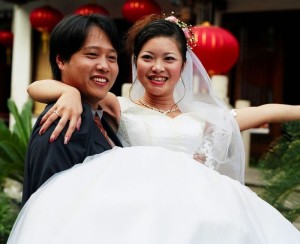 Getting Married in China – bliss until you realized you are not on the deed!

EL: I guess in reading your book, that was the hardest part for me to understand, that you have these very well-educated women. Most the of the women you interview are at least college educated if not PhDs. Very urban and sophisticated. They seem like this modern woman. It just seems so hard to comprehend that you have so many so willing to give up their equal economic rights in a relationship because of this concept. Is it just this media campaign – I guess if you can talk more about how strong this media campaign is. Or is it also something with the education system itself, that women aren’t questioning this propaganda. I just think if you were in a Western country, there would be more questioning of it.

LHF: Well it’s certainly not just [media]. I talk about the leftover women campaign. But when it comes to home buying, that’s simply one factor that’s shutting women out of property ownership. The fact that homes are so expensive is a huge factor as well. If homes were not so expensive then these women would be able to save up enough money on their own. Most of the women I interviewed wanted their own homes. So if they were able to afford it on their own, they would buy their own homes.

So part of it is China’s privatization in housing and the subsequent real estate boom has created these tremendous
new pressures on everybody in Chinese society: on the parents, on men and women. Even if the woman actually transfers her life savings over to the man to finance this loan [to buy the house], usually the man’s family ends up putting in more money than she does simply because the man’s parents have been saving all their lives. So then it may come down to the fact that the man’s family says: “well we put in more money therefore you have no right to put your name on the deed.” It may be the man’s parents who are really fighting with her and maybe her boyfriend would support adding her name to the deed. But it’s a very complicated transaction involving extended families pitted against each other.

But because of this fear that women over a certain age in their mid to late 20s are not going to be able to find a husband, it often winds up being that the parents of the daughter may actually help her finance the purchase the home but they don’t want the daughter to insist on adding her name because they’re afraid that her boyfriend or fiancé will walk out on her. 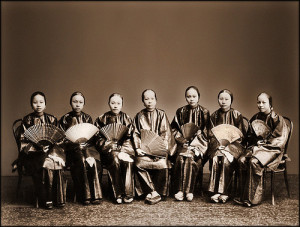 What’s wrong with being single? These ladies look like they are having fun!

just give in. In fact a lot of these young women again argue a lot; they can get into very heated arguments with their fiancés over the issue of putting their name on the property deed. So it is not as though they just blindly go into it and willingly give away all of their money and don’t think about it. Although that said there are some women who do that.

But it’s just a multi-layered form of discrimination against women. It also has to do with state regulations on the purchasing of property. For example, one woman I interviewed who was a PhD candidate, extremely educated, she desperately wanted her name on the property deed but her boyfriend and her own parents were telling her that it’s not worth putting her name on the deed because then if they want to buy a second home, then they would have to pay a much higher down payment. So that was the reason she gave for leaving her name off the deed. But she felt very bad about that. Then when I asked her well can you afford to buy a second home, are you going to buy one, she said no we can’t afford to buy it. So there are just many layers of obstacles for these women.

Part 2 of this two-part series will be posted tomorrow.