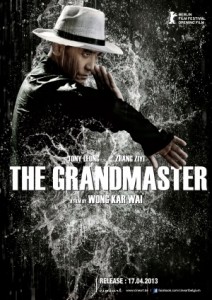 Many will likely compare Wong Karwai’s new kung fu masterpiece – The Grandmaster  – to Crouching Tiger, Hidden Dragon, but to do so does a disservice to the artistry, intensity and beauty that is The Grandmaster.  Wong Karwai out did himself on this one and if this movie is still playing at a theater near you, it is a must see on the big screen.

The Grandmaster opens with a dark, fierce, rain-soaked fight scene and center to it all is the white fedora of Ip Man (Tony Leung), perhaps the most famous master of the Wing Chun school of kung fu.  It is 1936 China, the Japanese are on the verge of invading most of China, and the various kung fu schools are seeking to unite.  Northern China’s great Grandmaster visits Foshan in southern China and calls upon the southern schools to present their best pupil to become the nation’s Grandmaster.  Although younger than most, the southern schools choose Ip Man and his Wing Chin technique.  The decision is interspersed with different kung fu school disciples demonstrating and explaining their own style, providing for a deeper understanding of the history of kung fu and seeing some of the moves that Ip Man will eventually adopt.

Ip Man, who was a  real kung fu master and lived in China and Hong Kong between 1893 and 1972, meets his match in the northern Grandmaster’s daughter, Gong Er (Zhang Ziyi) and her “eight fists” school of kung fu.  The fight ends up being a draw but the chemistry between the two is obvious as they each go back to their respective homes, planning a future meeting.

That meeting never happens as history gets in the way, first with the Japanese invasion and eventually with the Communist takeover.  Leaving even his family behind, Ip Man escapes to Hong Kong where he sets up a school.  In the 1960s, Ip Man’s most famous student – Bruce Lee – will join his gym.

As with most Wong Karwai movies, each scene is a painting, with its vivid colors and slow camera shots.  Wong’s tortured stories of longing – 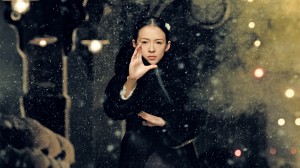 longing for the woman you love, longing for the life you once led, longing  for vindication – are told with even greater effect and emotion than his prior works.  Wong is surely at the pinnacle of his game.  But what makes The Grandmaster truly a tour de force is the combination of Wong’s style, respect for beauty and downright genius mixed into all the kung fu fight scenes.  The train station fight scene where Gong Er takes on her nemesis is perhaps the most intense five minutes of film making ever made.  And also one of the most beautiful.  Being on the edge of your seat the entire time, you want the scene to end.  But then you don’t because the beauty and gracefulness of Wong Karwai will end with it.

But The Grandmaster is more than just a series of beautifully shot scenes and exciting kung fu fighting.  Rather there is a story there – quite a number of stories – that Wong is trying to tell.  You can’t help wondering when watching the movie if Wong is really currently critiquing modern Chinese culture (or just all modern culture really).  With the modern day’s insistence on the material goods and the changeability of truth, The Grandmaster holds up a mirror to that society and shows the profoundness and spirituality that is kung fu.  That there are things bigger than ourselves in this world.  That with dedication to an art, one can transcend.  Wong Karwai has certainly done that with filmmaking and now he is showing how Ip Man did that with kung fu. 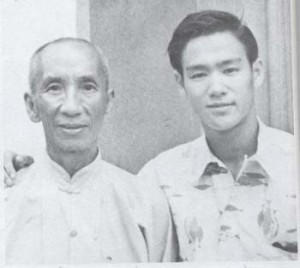 Ip Man with his most famous student, Bruce Lee

The version of The Grandmaster shown in the United States is shorter than the one shown in Asia, leaving out perhaps some character development of the more one-dimensional characters.  Also, some of the historical aspects are not mentioned in the US version – it isn’t very clear that Ip Man, as a master of kung fu, wealthy citizen, and Guomindang  (Nationalist) soldier, had to leave China once the Communists took over and thankfully for Hong Kong, his Wing Chun school could live on.

But these are minor critiques in an otherwise incredible piece of cinematography, storytelling, and kung fu genre.  It is a film that must not be missed.