After following China for most of my adult life and intently analyzing its development these past three years, I find many China events to be rather staid affairs; it’s usually obvious where the conversation will go and most speakers hedge their bets on China’s future, committing to neither its success nor its failure.  But not Susan Shirk.  Last night, at an Asia Society event to promote her new book, Changing Media, Changing China

, Susan Shirk was able to educate, entertain, and at times stun the audience on one of the least understood aspects of Chinese society: the media’s role in changing domestic politics in China.  But one would expect nothing less of a woman who dared to wear a fabulous red suit to the affair.

was joined by one of the contributors to the book, Prof. Benjamin Liebman of Columbia Law School, as well as sociologist Yang Guobin of Barnard College whose recent scholarship focuses on online activism in China.  Shirk began the night’s discussion by putting the role of the media into a historical context.  Comparing access to information in today’s China to the China of the 1980s, Shirk highlighted the fact that Chinese people today have much more access to information; during the 1980s the Chinese leadership had the monopoly on such access, but today, with a commercialized press and and the internet, there is a narrowing of this gap in access to information, putting the people’s access on par with their leaders’.  Shirk noted that it is this new style of media – with newspapers competing with each other for a story that sells papers and blogs spreading stories like wild-fire across China – that improves the Chinese government’s responsiveness to its people.  Although the central government is still ambivalent about the role of the media, it recognizes the media’s “watchdog” potential – through local newspapers, blogs and internet chat rooms, the central government is able to monitor and police the bad behavior of local officials.

Liebman on the other hand, offered a more cautionary view of the media, at least with respect to its role in the legal 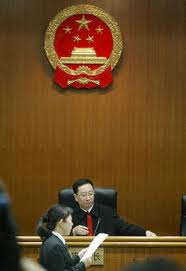 system.  When a case is picked up by the media – be it by blogs or newspapers – judges are under pressure, usually directly from Party officials, to decide the case in ways that will cool public passion, even if it means deciding the case irrespective of legal precepts.  Liebman went on to note that media coverage of a case only serves to reinforce the Party-State’s oversight of the courts; to guarantee a harmonious society, officials will demand that judges look to social stability as their primary goal, not the actual law.  But Liebman went on to note, it is not a one-sided game.  As the media has become more active in legal cases, the courts have fought back by liberally applying defamation laws.  Liebman noted that not only are plaintiffs overwhelmingly the victors in defamation cases in China (making media the losers), but in the past few years, Liebman has also noticed a surge in the number of criminal defamation cases.  Likely initiated by local officials after bad press coverage from the local media, the courts are caught in between this power struggle, making the establishment of a rule of law a more difficult task. 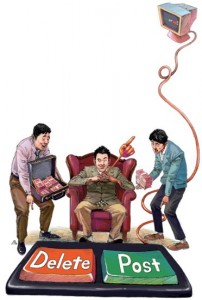 Yang had a more positive view.  Focusing on the internet and microblogging in China (microblogging is  a longer form of texting, allowing for conversations to develop), Yang has been amazed and impressed by the persistence of online activism in China.  While the Chinese government still maintains strategic control of the internet, Yang noted that there is only so much it can control.  People in China are communicating constantly over the internet, making it difficult for the government to monitor all conversations.  While many conversations are social, some eventually veer to the political, and the government is unaware to stop them.  Yang also noted that the number of online protests in the past year or so has increased substantially.  But Yang noted that the internet is still controlled; the government will erase postings and flood certain message boards with government-sanctioned comments.  Corporations have begun to steal a page from the government’s playbook.  Corporations also hire people to write positive reviews of their products, or negative ones of their competitors’.  Known as “water armies,” these hired guns make it more difficult to trust online information.  Similarly, the government’s control of chatrooms makes it difficult to use the internet in China as a barometer of public opinion.

Unfortunately each speaker was only given six to seven minutes to speak on such a huge topic.  The last hour of the program was dedicated to audience questions.  While the panel discussion offered a fascinating and thought-provoking analysis of arguably the most influential factor in China today, the audience’s questions veered off topic, with one woman – a self-proclaimed netizen – asking what the U.S. government can learn from the Chinese government’s promotion of the internet.  Fortunately Shirk felt no need to entertain the question, cutting it short with a resolute “nothing.”  Few of the questions were as nuanced as the initial discussion; Google’s “moral stance in China” was repeatedly referred to (making me realize that the Asia Society-set is not reading China Law & Policy’s Google analysis) and the ability of the internet to bring down the Chinese Communist Party (CCP).

In regards to the question of CCP downfall, Shirk offered a refreshingly frank answer: even without censorship or the 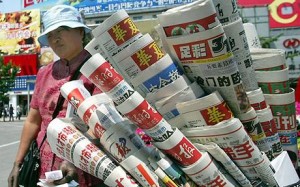 propaganda department, Shirk believes the CCP would still be able to maintain its power.  For Shirk, the fact that the CCP can: (1) point to huge improvements in the people’s living standards, (2) perpetuate the belief amongst most Chinese that without the CCP, China would descend into chaos, and (3) highlight the fact that China is now an important international power, would likely mean that many CCP candidates could easily win elections if China ever had any.  Even if China was to have an economic setback, Shirk still believes that it could maintain the sincere support of the Chinese people.  Shirk suspects that censorship is allowed to continue not because the Chinese government as a whole wants to suppress freedom of information; likely many government officials realize that by having a way to gauge public anger and a means to respond to it, their legitimacy could ultimately be bolstered.  Instead, Shirk speculated that it could be the powerful Propaganda Department that doesn’t want to budge from its culture of censorship, perhaps causing a split in the upper echelons of the Chinese leadership.

Asia Society’s “China’s New Media Landscape” only scratched the surface of the role of the media in China.  The discussion left one wondering – who wags the dog here.  While I’m usually the quintessential free-rider at these events, for this one, I was so intrigued by the discussion that I did buy the book.