In the interest of full disclosure, I knew Val Wang back in the late 1990s when we both lived in Beijing.  That’s part of the reason why I picked up her new memoir, Beijing Bastard: Coming of Age in a Changing China

.  Who of our friends made it into the book and which of our exploits were featured?  In essence, I wanted to take a walk down memory lane when time had no meaning and we partied hard.

Wang’s arrival in Beijing in the late 1990s was not certain; infact, far from it.  Growing up Chinese-American, Wang’s parents had major ambitions for her and she was constantly being compared – usually not positively – to her Saturday Chinese school classmates.  Wang wasn’t the typical Chinese-American child and fought her parent’s culture; whereas others went to medical school after graduating from college, Wang was just confused and without a plan.  Still rebelling against her Chinese parents, Wang ironically chose to go to China to get away from it all, find herself and grow up.

is more than just Wang’s coming-of-age story.  It captures a city on the cusp of change, where ancient homes were being torn down – both day and night – to pave the way to make Beijing the global, glitzy, Starbucks-filled city that it is today.  I remember visiting Wang at her compound, in an area of Beijing known as Maizidian’r (pronounced my-zi-dee-r).  Her apartment compound was the last group of buildings along a barely-paved street.  From there, the street quickly opened up to dusty dirt fields and farmers with donkey-pulled carts still roamed the area. But that was Beijing back in in 1999. 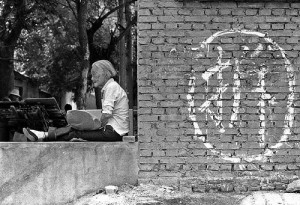 Or at least, one part of it.  As Beijing Bastard

wistfully recounts, changes were decimating the old parts and old ways of Beijing.  Much of Wang’s memoir intertwines with her family’s history in Beijing and her uncle’s attempt to save one of her great Aunt Mabel’s courtyard homes.  During the late 1990s and early 2000s, the Beijing government destroyed much of Beijing’s old homes in the hutongs (pronounced who-tongs), homes that had been around since the early Qing dynasty (1644-1911).  Interestingly, as Wang details, before destroying these homes, the Beijing government sought to compensate the original owners.  Even in a communist country, where many of these courtyard homes had been occupied by multiple families since the Cultural Revolution (1966-1972), the Beijing government still felt the need to make all of this legal, find the rightful owners and pay them for the destruction of their centuries-old homes. Wang follows her uncle’s quest to ensure that great Aunt Mabel, living in America, would be properly compensated.  But in describing his quest and the homes that were to be destroyed, Wang poignantly portrays what will really be lost: the old architecture, the closeness of neighbors, the history of families.

But Wang does not limit her analysis of Beijing’s disappearing past just to its hutongs.  Another story that weaves throughout her memoir is that of a family of Peking Opera stars.  The grandfather, a superstar in his day, now is relegated to holding court about Peking Opera from his bed.  Unfortunately, he has taught this dying art form to his two sons and like their father both are frustrated and angry that Peking Opera is an art that Beijing prefers not to preserve. The ancient art of Peking Opera

One wonders just how much of Beijing’s old ways have been lost to history.  It must be more than just the hutongs and the opera. Back then, Beijing was singularly focused on becoming “modern.”  But then at the same time, is it fair for a group of expats to lament the lost charm of homes that offered no privacy, where bathrooms were public and houses were drafty?  When Wang visits her hairdresser at her hutong home, the hairdresser can’t wait to move to a modern apartment on the edge of town.  Is it fair for an expat, who only spends a few years in Beijing, to wish for a lifestyle that she gets to leave?

does a great job of capturing a city when it still had a small town feel and was not the global city that it is today.  The stories of Wang family’s courtyard home and of the opera singers are both highlights. But even some of the tidbits about her self-discovery – who she is as a Chinese American, as the daughter of her parents, as Val Wang – are insightful.  While there are some points that meander but overall, if you want to get a glimpse of what what Beijing was like before the 2008 Olympics, Beijing Bastard

is a good read.

Beijing Bastard: Coming of Age in a Changing China