Must Read: Bill Bishop’s Analysis on the Anti-Japanese Riots in China 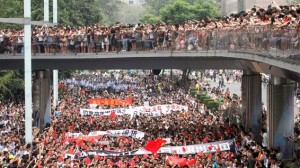 Anti-Japanese Protests in Beijing this Weekend

China Law & Policy has been following the anti-Japanese riots that spread across China this past weekend.  These riots appear to be a somewhat orchestrated response by the Chinese government – through the masses – to their dispute with the Japanese government over the Diaoyu/Senkaku Islands located in the East China Sea.  While this dispute has been ongoing, last week’s purchase of the islands by the Japanese government from the private owner, lead to saber rattling from China and this weekend’s violent protests.

At China Law & Policy, we have yet to blog about this affair, mostly because orchestrated, nationalist protests are difficult to divine.  Who are these protesters?  Just how orchestrated are these events?  Would the majority of Chinese allow their young children be witness to looting and violence and scream words like “kill the Japanese”?  Is this really about a pile of rocks?  There are limitations to our – and for that matter most people’s – ability to truly know what is going on.

The Western media has largely been focused on the violence that has erupted in China around these protests, and the use of the protests as possibly a government tool to hide issues of succession in the Party leadership.

But Bill Bishop, who runs the excellent blog/email newsletter Sinocism (if you are not subscribed to this, you should be), offers a much more nuanced view.  Yes, the protest are violent and yes they are likely orchestrated, but they do not reflect the sentiment of the majority of the Chinese.  Additionally, Bishop inquires as to what Japan was thinking in all of this.  Why would Japan choose to make these islands an issue now during China’s tense party leadership succession?  Bishop also analyzes the perhaps overblown contention that the U.S.’ treaties with Japan would require the U.S. to get involved.

Bishop’s post is a good read and an important fresh perspective.

One Response to “Must Read: Bill Bishop’s Analysis on the Anti-Japanese Riots in China”