In creating this blog, I never thought I would have the opportunity to write about my two favorite things in a single post.  But the two forces that have likely most influenced my life have now finally converged

Bob Dylan is banned in China.

In perhaps one of the most bizarre moves of censorship in recent memory, China’s Ministry of Culture denied Dylan permission to play in Shanghai and Beijing later this month.  It would be his first concert on the Mainland.  Jeffrey Wu of Brokers Brothers Herald, Dylan’s Asia promoters, speculated that the refusal is likely a result of the Chinese government’s fear that Dylan would say something controversial at his concert.  Ever since Icelandic singer Bjork screamed “Tibet!  Tibet!” after singing a song entitled “Declare Independence” during a concert in Beijing in 2008, Chinese government officials have been leery of singers that might be too political Wu told the Guardian.  Evidently, no one in the Chinese Ministry of Culture has been to a Dylan concert lately.  Because if they had, they would realize that even if Dylan said something controversial, no one would be able to understand it. 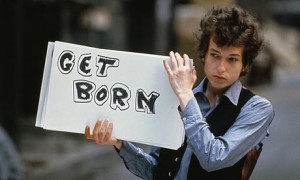 they are 40 years behind the times, I actually find their refusal sort of quaint.  To say I am a Dylan fan is a bit of an understatement; disciple might be a more apt term.  But I came to Dylan late, the early 90s, a point where Bob Dylan no longer signified the counter-culture which he sings about in his pre-1972 works.  Today, Dylan has become synonymous with the American mainstream culture, winning an Oscar (which he proceeded to bring with him to every show), singing for the Pope (no other than “Knockin’ on Heaven’s Door”), releasing a Christmas album, and selling the rights to some of his most memorable songs to various corporations for their commercial use.  I’ve never known first-hand the fiery, irreverent Dylan of my parent’s generation; instead I’ve only experienced it vicariously through the music.

Until today.  With the Chinese government’s belief that Dylan is too subversive for the Chinese audience I finally feel vindicated – I am listening to true a rebellious musician; not a 68 year old man who no longer articulates very clearly and sort of wears funny-looking clothes.  So although I don’t think Dylan is really a threat to the Chinese government –  many Chinese people are not that into Dylan (every time I have enthusiastically given a Dylan mix to a Chinese friend, the response is the polite mention that his voice isn’t very melodic) and it has been a while since any of Dylan’s thought-dreams if seen would likely cause him to end up in a guillotine – I think it’s great that the Chinese government still sees Dylan as a protest singer able to undermine its rule.  It’s so 1960s.