What’s Biden’s plan when our athletes protest and get detained?

Last Monday, the White House announced that, because of the “ongoing genocide and crimes against humanity in Xinjiang and other human rights abuses,” President Joe Biden will not be sending any diplomatic, government or other official representatives to the Beijing Winter Olympic Games.  With the U.S.’ announcement, other countries and territories have followed suit. New Zealand, United Kingdom, Canada, Australia, Scotland, Kosovo and Japan all have announced similar diplomatic boycotts.  To its credit, Lithuania preceded the United States in announcing a diplomatic boycott by three days.

But in light of the Chinese government’s ongoing persecution of Uyghurs and other Turkic Muslims – the unlawful internment of one to three million in camps (and yes, it is unlawful under Chinese law), the criminalization of their religion, the restriction on Uyghur births, the constant destruction of their mosques and other religious grounds, the seizure of Uyghurs’ passports, and the dehumanization of Uyghurs – a diplomatic boycott is not enough.  Our athletes’ participation in the shadows of what the U.S. government has declared a genocide and U.S. corporations’ Olympic sponsorship will make the Beijing Winter Games come off as business as usual.  We don’t look back on Berlin 1936 because we sent our diplomats to attend the Nazi’s Olympics.  We look back on the Berlin Summer Games because we allowed our athletes to perform before a regime that we knew was persecuting and dehumanizing its Jewish population.  And in allowing for business as usual, we demonstrated our lack of commitment to protecting Germany’s Jews and gave the Nazi government the imprimatur of global legitimacy.  With just a diplomatic boycott of the Beijing 2022 Winter Games, expect the same result which, if history is a guide, does not bode well for the Uyghurs.

Additionally, leaving the moral responsibility to do more on the shoulders of our athletes is not only unfair to them, it is also dangerous.  Many of our athletes are in their late teens to mid-twenties, peak age to take on causes and protest.  In March of this year, likely recognizing their athletes’ proclivity to activism and the U.S.’ tradition of free speech, the U.S. Olympic Committee permitted demonstrations at the U.S. Olympic trials.  At this summer’s Tokyo Olympics, U.S. shot-putter Raven Saunders, while on the medal podium, held up her arms in an “x” in protest for the oppressed of the world.

But such protests in Beijing could result in severe consequence for our athletes under Chinese law.  Disrespecting the Chinese flag is a crime under Chinese Criminal Law (Article 299) and anything touching upon Tibet or Xinjiang, such as unfurling or wearing a Tibetan or East Turkestan flag or symbol, could be deemed inciting separatism (Article 103) or inciting ethnic hatred (Article 249).  Similar with any show of support for an independent Taiwan or for protestors in Hong Kong.  Even writing #WhereIsPengShuai could easily fall under the Chinese government catch-all, anti-activist criminal prohibition against picking quarrels and provoking troubles. (Article 293(4): “making disturbances in public places. . . .”).  Even if the Chinese government doesn’t want to throw the book at a foreign athlete, there is always administrative detention – a 15-day prison sentence without trial – as a result of “disturbing public order” that could be a good way to prove its point.

The fact that the world will be watching should not afford any comfort. The past few years have shown that the Chinese government has no qualms in using its legal system to prove a political point.  For almost two years, the Chinese government detained Canadians Michael Kovrig and Michael Spavor in retaliation of Canada’s arrest of Huawei CFO Meng Wanzhou.  American citizens and siblings Victor Liu and Cythnia Liu, who went to China to visit family, were forbidden from leaving for over three years, likely as a way to pressure their businessman father to turn himself in on fraud charges.  Even the United States Department of State has noted the political use of the legal system , warning Americans traveling to China that the “government arbitrarily enforces local laws, including by carrying out arbitrary and wrongful detentions and through the use of exit bans on U.S. citizens and citizens of other countries without due process of law.”

So what’s the Biden’s administration’s plan when one of our athletes is detained or not allowed to leave China?  Has the U.S. Olympic Committee informed athletes’ parents and family what it will do when their relative goes missing?  The Biden administration and the U.S. Olympic Committee need to be honest with our athletes and their families that protesting in China could have real consequences and if they do protest, communicate now what the U.S. government will do for them.  It’s funny how our choice to engage in a diplomatic boycott also puts us, the bastion of free speech, in the awkward situation that to ensure our athletes’ return, we have to tell them not to protest against some of the gravest human rights violation in the world today.  Perhaps a more complete boycott – athletes, corporate sponsors, media coverage – would have been the better choice, both morally and for the safety of our athletes. 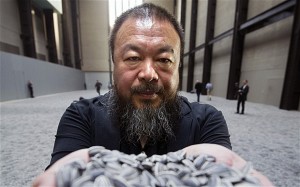 For the past few years, Ai Weiwei (pronounced “I Wayway”) – Chinese artist turned dissident turned heavy metal singer – has occupied the Western consciousness as the voice of China’s activist community.  A larger than life personality and an adept producer and user of social media, Ai is well known to the pages of the New York Times, Time Magazine, and other Western media outlets.

But is he truly the voice of the Chinese dissident community?  Or just branding himself for success?  Is he even an artist?

Alison Klayman’s provocative documentary, Ai Weiwei: Never Sorry, doesn’t precisely answer those questions. Instead the movie displays the humanity of the man behind the brand and perfectly captures the oppressiveness and absurdity of the Chinese government’s clamp down on any form of effective dissent.  That approach provides for a compelling documentary that both attempts to explain a complicated man and an even more complicated country.

When Klayman first began filming Ai Weiwei, she did not intend to create a film that adeptly portrays China’s fear of any form of dissent.  Instead, she was filming a Chinese artist whose star was on the rise after assisting with the design of Beijing’s iconic Olympic stadium, the Bird’s Nest.

But soon after she began filming, a monumental earthquake hit Sichuan, China, killing over 70,000, many whom were children attending classes 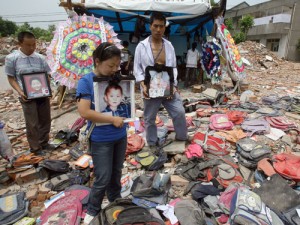 Parents at the Mianzhu School, with children’s backpacks still sprawled on the ground

at schools that it turns out were shoddily built.  The unnecessary deaths of these children and the fact that the Chinese government failed to investigate the causes or even reveal the exact number of children killed, was a life-changing moment for Ai, which Klayman skillfully portrays in the documentary.

In December 2008, Ai begins his single-minded quest to provide transparency to this tragedy.  Through a series of trips to Sichuan, Ai interviews various families to learn the names of the children killed.  In the process he creates a network of volunteers who assist him in this endeavor.  Ai’s work culminates in a moving documentary of his own “So Sorry” which exposes the shoddy construction of school buildings and the subsequent government cover up.

On the first anniversary of the Sichuan earthquake, Ai goes online, publishing the names of these children.  Eventually, he organizes an online campaign where individuals across China can call in and recite one of the children’s names.  The ultimate product is perhaps the most subversive of Ai’s art – it is not just a tribute to the children lost; it is a wake-up call to the Chinese government that it is more than just Ai that wants greater transparency about the Sichuan earthquake; there is a whole bunch of people dissatisfied. 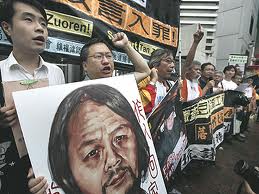 Not surprisingly, the Chinese government does not take kindly to Ai’s investigation and call to arms.  He has done the two things that scare the Chinese Communist Party the most – he has been able to effectively galvanize and organize a large swath of the Chinese public nationally and he has been able to subvert the firewalls and use social media to its most.  When he is in Sichuan, he is beaten and prevented from testifying at the trial of earthquake activist, Tan Zuoren; he is followed by local police who create more a scene in trying to “disperse” Ai than if they had left him alone; the Shanghai government – without any trial or hearing – tears down his studio (which they had invited him to build only two years previously); and he is eventually arrested by the Beijing police, kept in an unknown place without access to family, for over 60 days.

All of these actions demonstrate the absurdity by which the Chinese government deals with its people, especially those who seek to hold the government accountable.  Some might refer to this as dissent, but as Ai’s Sichuan earthquake online campaign demonstrates, and later on the “demolition party” he has at his Shanghai studio, it isn’t really dissent when so many ordinary Chinese people are in agreement with him and support him.

Klayman also spends time interviewing Ai about his childhood which, although Ai shortchanges its influence, must have had some impact on his current world view.  Fortunately, Klayman spends some time developing this part of Ai’s story.  Ai’s father – Ai Qing – was a famous revolutionary poet and early communist supporter, joining the Chinese Communist Party and partaking in its historic “Long March.”

But like many intellectuals in the late 1950s, Ai Qing soon felt the weight of the Chinese Communist Party’s Anti-Rightist Campaign (1957).  With his new “dissident” label, Ai Qing and his family – including the one-year old Ai Weiwei – were banished to China’s far western province of Xinjiang.  There the Ai family would remain for 19 years.  As Ai Weiwei recounts in his interview, his once illustrious, revolutionary father was forced to clean toilets.  During China’s Cultural Revolution, Ai Qing became his city’s enemy number one and subject to repeated abuse at the hands of the Red Guards.

You can’t help but draw conclusions that Ai Weiwei’s current questioning of authority is a result of what must have been horrible childhood experiences.  Which makes you wonder – what about all the other children of victims of the Cultural Revolution?  Ai is public in his dissatisfaction but you can’t help but think that his emotions must be shared by a large number of China’s “Lost Generation.”

Klayman’s Ai Weiwei: Never Sorry is amazing precisely because it never does answer the questions which started this post – does Ai speak for 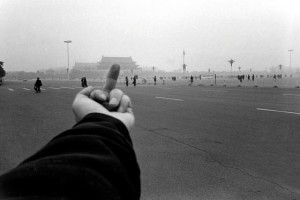 Guess what Ai Weiwei is telling the Chinese government?

the Chinese people or is he merely a brand.  The movie leaves you confident with the fact that it doesn’t matter.  That this man, and only this man, should be judged on his actions alone, and his actions thus far are sincere and heroic.  By the end of the film, you can’t help but like the guy and cheer him on as he single-handily antagonize the Chinese state in order to have some accountability of the Chinese government.