Who Is the Hooligan? A Review of Wang Nanfu’s New Documentary 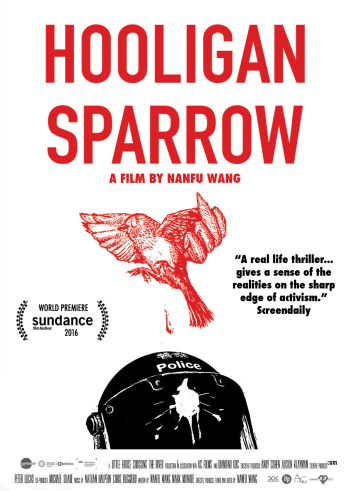 Director Wang Nanfu did not intend to make the movie that became Hooligan Sparrow, the opening feature at this year’s Human Rights Watch film festival.  But it’s hard to avoid creating such a tour de force when you become enmeshed in the absurdity that is the life of a Chinese rights activist.

In spring 2013, Wang Nanfu (pronounced Wong Nan-foo) returned to her homeland of China to make a documentary about women’s rights activist Ye Haiyan, also known by her online name “Hooligan Sparrow.”  Since 2006, Sparrow has worked with China’s sex workers, providing educational materials on safe sex and advocating on their behalf, particularly for those who work in low-cost brothels that charge only a few U.S. dollars.  To bring greater exposure to sex workers’ plights, in 2012, Sparrow engaged in a bold campaign: working for a day in one of these low-cost brothels and providing sex for free.  Her campaign worked and soon she was on TV talk shows, explaining to Chinese society the discrimination that these sex workers face.  This is what Wang Nanfu intended to cover.  But when she arrived in China, Sparrow was on to a new justice campaign: ensuring that the pimping of schoolgirls to government officials on Hainan Island would be prosecuted.

In early May 2013, the principal of a local school on Hainan Island took six of his female students – ages 11 to 14 – to hotels where they were forced into sex with him as well as with a government official.  Although the story sparked outrage online, the local police initially claimed that the two men did not have sex with the girls, even though the parents uploaded pictures to the web which provided ample evidence that the two men did.

Sparrow with her sign: Principal: Get a room with me, leave the schoolchildren alone!

Sparrow and a group of other activists, including noted human rights lawyer, Wang Yu, leapt into action, immediately traveling to Hainan to protest outside of the girls’ school and demand the arrest of the principal and the government official on charges of rape.  Realizing that a trial in the media – especially the social media – is increasingly the only way to achieve justice in China, Wang captures Sparrow’s genius as Sparrow comes up with a slogan that she knows will go viral: “Principal, get a room with me, spare the schoolchildren!”  Almost immediately the picture of Sparrow holding that sign gets picked up by hundreds of netizens, and in a show of solidarity, many post selfies holding signs with the same slogan.  By the end of May, Sparrow’s campaign finds success and the two men are charged with “sex with underage prostitutes,” a charge though that is less severe than the crime of rape. For Sparrow, that charge is not enough, and she and Wang Yu continue their fight to eradicate the lesser crime of “sex with underage prostitutes,” arguing what people in China and the rest of the world know to be true: that any sex with a minor – be it paid or not paid – is not consensual and is rape.

This intense incident, with plainclothes police physically jostling the protesters, is only the start of what becomes an increasingly powerful condemnation of the current Chinese Communist regime.  Although Sparrow was successful in her protest – with the legal system prosecuting the principal and the government officials – the Chinese government, as Wang Nanfu skillfully documents, views Sparrow as anything but a success.  Instead, the full power of the regime comes down on Sparrow, and hard.  But, as Wang Nanfu beautifully captures, Sparrow is more than an activist.  She is also a single mother to a 12 year old daughter.  It is watching Sparrow’s relationship with her daughter – and the concern any mother would have for her child – that makes Hooligan Sparrow into more than a documentary about a rights activist and her movement.  It captures the human toll that such advocacy has on both the activist and her family. When Sparrow is unlawfully detained on trumped up charges in what appears to be a way to punish her for her Hainan protests, her daughter is largely left to fend for herself.  Once freed, government-hired thugs hold a protest outside of Sparrow’s home, calling her a prostitute and demanding that such a loose woman move from their neighborhood.  Sparrow’s daughter hears all of this.

Sparrow’s daughter, trying to get homework done while her mother gets arrested.

But slander against her mother is not the end.  Sparrow is eventually evicted from her apartment, a tactic that Chinese authorities increasingly use against human rights activist.  Why detain activists in violation of the law when you can put pressure on landlords to evict them and make their life one on the run?

What Wang Nanfu documents next is Sparrow and her daughter’s constant movement, looking for a place to live.  In one city, Sparrow is able to rent an apartment but the local school will not accept her daughter because of Sparrow’s activism.  Yet again, Sparrow is forced to move.  With each move their possessions become less and less until all they have is one backpack each.

The next city Sparrow moves to, the authorities already know she is coming, and in one of the movie’s most harrowing scenes, the film goes dark and only confused sound is heard as Wang Nanfu and Sparrow’s daughter run up the stairs to try to get into the apartment before their pursuers  can capture them.  In the black background, you hear Sparrow yelling at the authorities, unclear if there has already been a physical altercation but knowing if there was one, Sparrow was not going to win.

Sparrow can never win and that is one of the absurdities about the current regime that Hooligan Sparrow captures perfectly.  In any other society, Sparrow’s successful advocacy would be celebrated.  But in China, even when the regime adopts the exact measures advocated for, the rights advocate must still be persecuted.  In other words, if your cause is successful, it is that success that will be your downfall.  Which makes one wonder, how will Chinese society ever become more just if this is the catch-22 that rights advocates constantly find themselves in?  The Chinese Communist Party’s mantra is largely maintaining the status quo; reform that brings greater justice to society’s vulnerable is hardly a priority.  Even President Xi Jinping’s campaign against official corruption did not capture the corrupt government officials having sex with minors, a much more common occurrence than just an isolated incident in Hainan.

But it is Hooligan Sparrow‘s poignant portrayal of the unnecessary suffering of Sparrow’s brave daughter that resonates the most.  How can a government do this to an innocent child?  To be on the run, to be rejected from schools, to be a social outcast at the age of 12?  It isn’t Sparrow that is the hooligan in all of this.  That title clearly belongs to the current regime.

To understand China today, Hooligan Sparrow is a must see.  Wang Nanfu has created a master documentary, one that rejects the staid interviews of the past and instead gets in the center of the action.  It is through her own brave film making that we can begin to understand the trauma of being a rights activists in China.  But it is also through Wang’s artful storytelling that one can also see their humanity, providing hope that Sparrow – and all the activists like her – will continue to go on.