In Defense of Dylan in China: Come Writers and Critics Who Prophesize with Your Pen 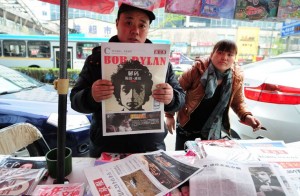 Maureen Dowd’s op-ed in Sunday’s New York Times – Blowin’ in the Idiot Wind – lambasts singer-songwriter/protest-singer/civil-rights-activist/voice-of-a-generation/whatever-he-is-to-you Bob Dylan for his recent concert in Beijing, China.  For Dowd, Dylan’s acceptance of the Chinese government’s approval of his set list is anathema to everything he represents.  Dropping his famous protest songs of “Blowin’ in the Wind” and “The Times They Are A’Changin’” from the set list during China’s most severe crackdown on its own citizens since 1989 and ignoring the recent detention of Chinese rights activists shows, for Dowd, that Dylan is nothing more than a sellout, willing to auction his morals to the highest bidder.

But Dowd’s virulent critique of Dylan makes one wonder, where has she been in all of this?  Dowd is an obvious Dylan fan, likely even a disciple, with her skilled use of Dylan quotes and understanding of the man’s extremely tangled and uncomfortable history with fame.  But China’s “harshest crackdown on artists, lawyers, writers and dissidents in a decade” and its “dispatching the secret police to arrest willy-nilly, including Ai Weiwei” as Dowd notes, didn’t just start this weekend and didn’t just start with the detention of Ai Weiwei.

Since the middle of February, the Chinese government has been illegally abducting Chinese rights activists, preventing them from contacting their family let alone a lawyer, and subjecting them to torture and abuse.  This siege on rights activists in China is done as a pre-emptive strike on the nascent civil society that has been developing and is an attempt for the Chinese Communist Party to avoid the fate of Mubarak and Ben Ali and maintain its one-party authoritarian rule, especially as a change of leadership comes in 2012.

Tang Jitian was abducted from his home on February 16, 2011, starting what has proved to be a wide-cast net of illegal abductions and abuse (abuse of both China’s own laws and the individuals that remain in custody).  Since then, Dowd has written 13 columns, not a single one dealing with the issue of the Chinese government’s harsh and violent crackdown on its citizens.  Today’s column barely touches upon the issue and instead focuses on Dylan’s “selling out.”

Let’s face it, Dylan is unable to sell out because he never bought in in the first place.  Dylan never fully engaged the civil rights movement.  While his songs did become a motivating force for many of the great civil rights activists and moments in U.S. history, by 1965, he was done with folk and had plugged in.  And since the 1980s, Dylan has been on a non-stop tour, selling the rights of his iconic protest songs to commercial entities (the rights to Times They Are A Changin’ was first sold to accounting firm Coopers & Lybrand and in 1996 to the Bank of Montreal), appearing in a Victoria’s Secret ad, producing an abysmally bad Christmas album, and almost never including Blowin’ in the Wind and the Times They Are A’Changin’ in any set list anywhere in the world (review his set lists here: http://www.bobdylan.com/tour/calendar/2010).

Dylan’s lack of mentioning China’s recent crackdown on dissent isn’t shocking.  In fact, the old guy likely knows nothing of what is happening in China – why should we rely on him to be our voice and do all the work?  This isn’t his issue; in fact, the man likely has no issues other than himself.

Which brings us back to Maureen Dowd.  Unlike most of the people concerned about human rights abuses in China, Dowd has a powerful platform for her voice – her twice-a-week column in the N.Y. Times.  With a large and influential readership that likely reaches the halls of the White House and Congress, discussion of China’s recent abuse of its own citizens and its subversion of a rule of law in her column could influence important policy makers as well as the world-at-large.

To their credit, some of the world’s major newspapers have been reporting on China’s recent crackdown, but these articles have been cursory at best and do not fully explain why China’s recent assault goes above and beyond what traditionally occurs in an authoritarian regime.  But most individuals knowledgeable on the issue have had extreme difficulty in getting their voice out in the mainstream press (kudos though to The International Herald Tribune and the N.Y. Times for publishing opinion pieces in its print editions and kudos to  The Guardian and the Wall Street Journal for having opinion pieces on the issue in their online papers).

Dowd has the opportunity to expose what is happening in China and call for the freeing of, or at the very least the end of the abuse of, not just Ai Weiwei, but also rights-defending lawyers Tang Jitian, Jiang Tianyong, Teng Biao, Liu Shihui, Tang Jingling, Li Tiantian, and Gao Zhisheng.  The whereabouts of these lawyers, unlawfully abducted by Chinese authorities (even under Chinese law), remain unknown.  Their only offense: asking the Chinese government to uphold its promise of a rule of law and using the legal system to protect society’s most vulnerable.

Dowd’s disappointment in Dylan’s snub of China’s crackdown on dissent leads me to believe that this is an issue Dowd is concerned about.  But instead of asking Dylan to be the spokesperson for the issue, Dowd should practice what she herself appears to preach.  My challenge to Dowd is to use her sharp-witted pen and find a way to raise the plights of China’s rights-defenders in the American consciousness instead of relegating it to two sentences in a column that is otherwise a critique of Dylan.  If Dowd doesn’t, then I am left to think “you could have done better but I don’t mind, you just kinda wasted my precious time….”