Obama & Hu share the stage in Pittsburgh. Soon it will be Beijing.

President Obama will visit China, his first trip to the country, from November 15 through the 18.  Although his visit is less than two weeks away, the question remains – what will be on the agenda for his three days in China.  While the White House has yet to release President Obama’s schedule, expect President Obama and President Hu Jintao (pronounced Who Gin-tao) to discuss military ties, global economic health, climate change and human rights.

While U.S.-China economic ties bring the two nations into alignment on various issues, military-to-military relations remain dangerously tense.  President George W. Bush realized this early on in his presidency after a U.S. spy plane crashed with a Chinese military jet and was then forced to make an emergency landing on Hainan Island in China.  For a few days, it was unclear what the Chinese military would do with the captured U.S. pilots, leading to the acknowledgement that better communication between the two militaries was necessary.

President Obama has already had a taste of the danger of weak military ties this past March, when five Chinese naval vessels circled and threatened a U.S. navy ship in international waters, 75 miles off of Hainan Island.

The People’s Liberation Army (PLA) is largely to blame for the lack of communication between the two militaries.  Historically, the PLA has remained secretive about its military development and has usually refrained from military-to-military relations with other countries, although that is slowly changing.  While the Clinton Administration made some headway, at least on paper with the signing of the Military Maritime Consultative Agreement (MMCA), suspicion between the two militaries has remained high and there are no procedures in place for each country’s military to follow should unexpected events occur.   The U.S.’ military agreements with all other countries, including Russia, contain provisions to deal with emergency incidents to prevent their escalation.

As an emerging superpower and already a regional one, minor military incidents with China will likely continue to

occur, especially as China rapidly expands its military spending and build-up. Without better communication, these incidents can easily turn to major crises.  The Obama Administration appears to recognize this danger.  Defense Secretary Robert Gates just concluded a meeting with Vice-Chairman of the Central Military Commission (CMC), Xu Caihou (pronounced Sue Tsai-ho) in Washington, D.C. after Mr. Xu spent a week in the U.S. viewing U.S.  military bases and meeting with other military leaders.

Securing a better understanding between the two nations’ militaries would be no small feat.  The PLA remains a very powerful, and largely independent, force within the Chinese government and President Hu Jintao’s control over the organization remains questionable (see Susan Shirk, China: Fragile Superpower, p. 73).  But it appears that President Obama, especially after the March 2009 incident in the South China Sea, recognizes the importance of pushing China forward to secure better military ties.  However, anticipate that China will raise the issue of U.S. arm sales to Taiwan, and may very well use that as a bargaining chip for better U.S.-China military relations.

(2)   Coordination on the Global Economic Crisis – Tow Superpowers Tied Together

To make it through the current global economic crisis, China needs the U.S. and the U.S. needs China.  While China’s stimulus package has taken hold quicker then its American counter-part, China’s future is still largely dependent on the U.S.’ success.  Last year, China surpassed Japan as the largest holder of U.S. Treasuries, holding approximately $800 billion (25% of total U.S. Treasuries); this amount accounts for approximately 40% of China’s foreign reserves.  In order for the U.S. to continue to fund its stimulus, it needs China to continue to purchase U.S. Treasuries.  But at the same time, China right now has no choice but to hold the treasuries, intertwining China with the future of the U.S. economy.

Because of this arrangement, expect China to scold the U.S. on its increasingly high levels of debt.  This though is more for the domestic Chinese market than actually for U.S. policy makers.  The Chinese government’s hands are tied – it cannot sell off their Treasuries; its act of selling would inevitably cause market to decrease the price of U.S. Treasuries while China is attempting to sell.  But it still has to show the Chinese people that it is doing something.

On the U.S. side, anticipate the issue of currency manipulation to be raised but not to be discussed in-depth.  Commerce Secretary Gary Locke raised the issue on his trip to Guangzhou last week, a surprise since currency has not been a high priority as of late.  However, for certain U.S. industries, such as the steel industry, China’s currency policy remains a viable issue.

In terms of trade issues, such as the recent U.S. tariffs on tires and Chinese threats to slap tariffs on certain U.S. imports in response, expect some discussion.  But largely, this “trade war” has become much less of a problem.

Instead, U.S.-China discussions on the economy will likely entail how U.S. and Chinese companies can continue to work together.

Do not expect much in terms of climate change.  Todd Stern, the Administration’s special envoy on the issue, announced last week that a bi-lateral agreement is not likely to emerge from President Obama’s and President Hu’s discussions on climate change.  Instead, the heads of state of the two leading emitters of greenhouse gases are hoping to reach “a common understanding.”

Anticipate that a “common understanding” will involve a discussion of financial and technical assistance to China to help combat climate change.  As of the U.N. General Assembly in September, the U.S. and China do not see eye-to-eye on this issue.  While the European Union has pledged to provide financial assistance to developing countries, including China, the Obama Administration has yet to agree to such assistance to China.  However, it is this issue that the U.S. should attempt to parlay into actual emission targets from China.

In terms of greater technical assistance, expect President Obama to ask for more protection of intellectual property and actual enforcement of the law in China, an issue Commerce Secretary Gary Locke recently raised on his October 2009 trip to China.

Finally, the success of the Obama-Hu talks on climate change will determine whether either leader will join the rest of the world in Copenhagen in December.  This is pretty much a package deal; if the U.S. and China reach a “common understanding,” expect both Obama and Hu to attend Copenhagen.  If they do not, expect both to be watching it on T.V. from home.

Whether President Obama brings up the issue of human rights is currently the big “if” of his visit.  Secretary of State Hillary Clinton received tremendous backlash, both at home and internationally, when she heavily implied that the U.S. would not press China on human rights at the expense of other issues.

However, during Ambassador Huntsman’s Senate confirmation hearing, he repeatedly stressed the importance of a continuous dialogue with China on human rights.  Furthermore, the release of activist-attorney Xu Zhiyong upon Ambassador Huntsman’s arrival to Beijing is likely a reflection of pressure from high up in the Administration (Xu Zhiyong ‘s organization received financial support from Yale University, Secretary Clinton’s alma mater).  But more than anything else, Xu Zhiyong’s detention made apparent to the Administration the important role that the U.S. still plays to many of these Chinese human rights activists; the U.S. still serves as their beacon of hope, and often gives these activists the courage to push forward when many in their country and their government work against them. 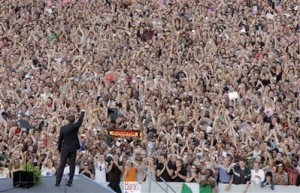 Obama Before the Crowds in Germany. Will it be the same in China?