China Continues to Blame Outside Forces for Riots

This morning, the China Daily reported that over 200 people will go on trial, likely this week, for various crimes 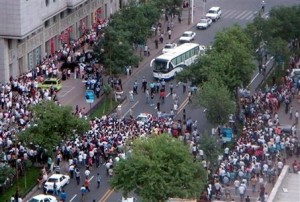 Photo of Chinese protestors in Urumqi, Xinjiang on July 5, 2009

relating to the July 5 riots in Xinjiang.  Surprisingly, the China Daily also reported that all trials will be public aside from those involving charges of “splitting the State” and “instigating to split the State.”  Because the number of cases involving these charges has not been announced, it is unclear how many of the trials will in fact be public.

Additionally, officials have yet to announce how many of the defendants are Han Chinese and how many are Uighur; at least some will be Han since the China Daily last week reported that trials of the Han defendants will occur before the Uighur defendants’ trials.

The announcement that over 200 people were arrested and face trial in the coming week was a departure from the “small number” originally anticipated.  At the beginning of August, the Chinese police stated that out of the 1,600 people detained, only 83 had been arrested.  Under the Chinese Criminal Procedure Law, a suspect can be detained for days, and in politically sensitive cases for a good month, without being formally arrested.

As with most of the articles concerning the Xinjiang riots, China Daily’s recent report again blamed foreign forces for instigating the riots.  Both the Chinese press and Chinese officials have repeatedly assigned blame for the riots to Rebiya Kadeer, a Uighur woman who was granted political asylum in the United States in 2005.  Once viewed as a model minority by the Chinese government because of her successful businesses in Xinjiang, Ms. Kadeer soon fell out of favor when she began to support Uighur causes.   Jailed in 1999 for allegedly passing state secrets, Ms. Kadeer was freed to U.S. custody in 2005.  Since then, she has become president of the Uighur American Association and the World Uighur Congress.

Because the Chinese government is intent on presenting an appearance of a “harmonious society,” it is essential that it seeks to blame outside forces when discontent is presented by some of its minority groups, regardless of the claim’s validity.  After the March 2008 protests and riots in Tibetan areas of China, the Chinese government vilified the Dalai Lama, accusing him of being the mastermind behind the riots.  However, the government never provided any evidence to support the claim that the Dalai Lama was involved (see Premier Wen Jiabao’s statements here).

Interestingly though, China’s denunciation of the Ms. Kadeer might have the unintended consequences of designating a leader of a movement that up to this point was without one.  Tibetans easily rally around the Dalai Lama since he is their spiritual leader.  But for Uighurs, there have been few that have reached the level of the Dalai Lama and symbolize their culture and religion quite the same way.  However, by continuously pointing to Ms. Kadeer and accusing her of masterminding the riots, the Chinese government may have inevitably provided the Uighur people and the Uighur movement with a much needed leader. 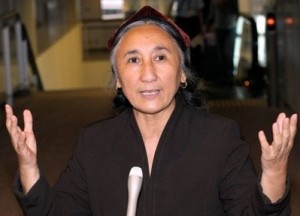