On the Eve of Copenhagen – China and the U.S. Join the rest of the World at the Table

Our last posting about the upcoming global climate change negotiations was not very positive; in fact very few analysts have been positive.  But the past week has proved interesting, with both the United States and China issuing carbon reduction plans, forcing us to reconsider our previous notion that Copenhagen will produce little results.

The U.S. and China Issue their Respective Climate Control Plans

Right before Thanksgiving, President Barack Obama announced that the U.S. will be attending Copenhagen with a promise to cut emissions of greenhouse gases (GHG) by 17% from 2005 levels by 2020.  While it is a step forward that the U.S. will be attending the climate change talks with specific targets, those targets are still very much provisional.  Any targets coming out of the climate change talks will require Congressional approval post-Copenhagen.   While the 17% cuts proposed by the White House are identical to the GHG emission targets found in the House of Representative’s climate change bill passed in June, that bill has been languishing in the Senate, and will likely face an uphill battle once the Senate turns its attention from health care to climate change.   So whether the 17% cuts become a reality remains to be seen.

The day after the U.S. announcement, China issued a “carbon intensity target” reduction of 40-45% by 2020 to bring to Copenhagen.  While this looks huge on paper, in reality, it would allow GHG emissions to increase while China’s economy continues to grow, albeit GHG would grow at a lower rate.  Carbon intensity measures carbon emissions per unit of gross domestic product (GDP), so if your GDP skyrockets ever year, like China’s does at a rate of 8% a year, you can actually increase your absolute greenhouse gas emissions, and still show a 40-45% reduction by 2020.  Julian Wong on the Green Leap Forward also gives a good description of the math behind this.  China expects its GHG emissions to peak around 2035, a time that many experts believe is too late.

Although both the U.S.’ and China’s plans are far from perfect, at this stage, something is better than nothing from the world’s two largest greenhouse gas emitters.  And China has made concerted and sincere efforts thus far to increase its energy efficiency and reduce its greenhouse gas emission rate.

Now that China has set Some Targets Will it Be Able to Measure Them?

China is not known for reliable government statistics and while there has been notable improvements, its ability to 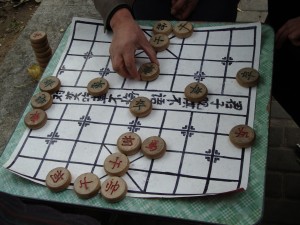 accurately measure and report its greenhouse gas emissions, and thus be held accountable to international commitments, has remained an issue leading up to Copenhagen.  Currently, China lacks the capacity – both technical and institutional – to provide such reliable data.

However, China has recently agreed to some cooperation with international and U.S. bodies to assist with developing its capacity to accurately measure its GHG emissions.  The U.S.’ Environmental Protection Agency (EPA) and its Chinese counterpart, the National Development Reform Commission (NDRC), signed a memorandum of cooperation (which is a step up from a memorandum of understanding) to work on China’s capacity issues concerning its ability to measure its emissions output.

But as Charlie McElwee over on the China Environmental Law blog [website no longer available], the EPA-NDRC memorandum currently lacks particulars and will likely go nowhere without being fully fleshed out.  At Copenhagen, the U.S. and the E.U. need to pressure China to work more closely with foreign bodies in developing its capacity.  It is important that Copenhagen does not conclude without a detailed plan to develop China’s capacity.  Additionally, this capacity development, especially in terms of institutional development and the ability of China to enforce its environmental regulations at the local level, could potentially influence the enforcement of regulations in all fields of law, providing for greater rule of law in China.

China though will not make this access easy; China has already begun to use this as a bargaining chip for greater financial assistance from developed countries for its climate change policies.  China’s climate change ambassador, Yu Qingtai, announced recently that China will only allow foreign verification of its GHG emissions if it receives outside financial assistance: “Actions would be measurable, reportable and verifiable if (international) support is measurable, reportable and verifiable.”  China’s stance on this should not be surprising.  It has repeatedly asked for international financial support for its efforts to curb its GHG emissions since the current climate crisis has largely been a result of the developed world’s past actions and not because of China’s development (it’s the future environmental crisis that China will largely play a role in if things remain as is).  China’s argument is understandable and rings true.

Fortunately, the Obama administration remains open to discussing a financial commitment.  China appears ready to bargain – if the U.S. wants the access to assist China with developing its technical and institutional capacity, which is necessary for any agreement out of Copenhagen to truly succeed, it must be ready to bargain as well and provide some financial assistance.