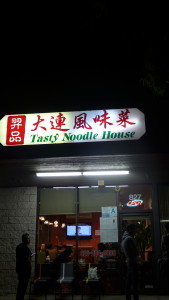 The thing about Chinese food in California is the vegetables.  With cities like Los Angeles and San Francisco only a stone’s throw away from major agricultural areas, “fresh” takes on a whole new meaning there.  When you mix that with the fact that Chinese cuisine really plays up vegetables and lets them stand on their own, you can find some of the best Chinese food in America.

And some of the best Chinese food in America is exactly what I found last Friday night in a tiny little restaurant called Tasty Noodle House located in a nondescript strip mall in San Gabriel valley, just outside of LA proper.

With three other friends, one who is a vegetarian, we ordered large with a total of eight dishes.  While the waitress told us at dish six that we over ordered, the food is so amazing that, by the time we were done with our meal, not a single scrap was left. Some of this had to do with the fact that we were starving after a day of hiking, but also Tasty Noodle House goes light on the oil, allowing the flavors of the food to stand on its own.  But even without the heavy oil, the food is authentic and the place is perfectly Chinese – a bathroom that can only be found by walking through the narrow kitchen and Mandarin soaps on the flat screen TV.

The first dish to arrive was the sautéed green beans.  Ordinarily, this is a dish with pork but Tasty Noodle House does a different take: thick, succulent string beans, flavored with garlic and ginger with tiny little shrimps.  The ginger addition and shrimp were a pleasant surprise and really made this into a light, delicious dish. 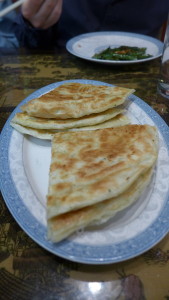 But what came next is what I would term a little piece of heaven: the scallion pancakes.  These were thin little things, perfectly crispy and soft, and with only a hint of scallion, not the overpowering flavor that usually fill the pancakes in less refined Chinese restaurants.  These pancakes also did not have the grease of a takeout joint and instead appeared to replace traditional Chinese cooking oil with what my dining companions could only conclude was butter.  While not traditional, this addition of butter made these pancakes irresistible.

But the highlight of the meal was the Sichuan eggplant (鱼香茄子).  This is by far the best Sichuan eggplant I have had in a long while.  The tough purple skin was not to be found on this eggplant, allowing the eggplant itself to take on the flavors of the sauce which was exploding with flavor.  Although slightly oily than other dishes, this was eaten quickly by my dining companions.  If you like eggplant, this is a must order dish. 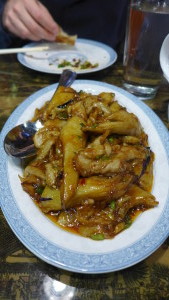 And while Tasty Noodle House does amazing things with its vegetables, its meat dishes are not to be overlooked.  Because we were only ordering one meat dish, the waitress informed us that the best meat dish on the menu is by far the sliced lamb pan fried.  She was right.  The lamb, a good, lean cut, was delicately balanced by the very fresh vegetables that also came with the dish.  All too often lamb dishes in Chinese restaurants are nothing more than a vehicle for cumin, with the cumin overpowering all other flavors.  But not at Tasty Noodle House.  Instead, the chef truly understands subtlety and allows the flavors to work with each other.

Finally, while Tasty Noodle House has pretty amazing dumplings for a restaurant that is not a dumpling house.  These are not store bought dumplings either.  The waitress informed us that all dumplings are made on site, even the skin of the dumpling is made there.  We ordered the leeks and fish boiled dumplings and the filling to dumpling skin ratio was almost perfect, with the filling bursting with fish meat and skin adding only a supporting role.

Our other dishes were also all pretty amazing but these few stand out as truly spectacular. Tasty Noodle House is one of the best Chinese restaurants in America with an all around amazing menu.  This isn’t a place that specializes in one dish or a place where the heaviness of Sichuan’s “mala” flavoring is overly relied on to mask otherwise 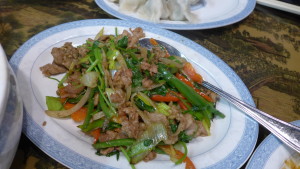 flavorless dishes. The chef – from the Dalian region of China – truly understands how to play with flavors, allowing each to play its role in the carnival of flavors in your mouth.

Tasty Noodle House is a small space, with about 7 tables.  I would recommend going during off hours to ensure that your wait is not too long.  But if it is, that just means you will be even more hungry and will order more.  And that over ordering will not break the 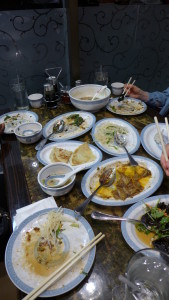 bank.    For my three friends and me, the total bill with tip came to about $84.  Note that Tasty Noodle House does not serve alcohol and from what I could see from others, does not allow BYOB.  But you don’t need it here.

I will be returning to LA in the spring and rest assured, there will be another trip to Tasty Noodle House so I can order the rest of the menu.  I can’t wait to see what else the chef has in store.