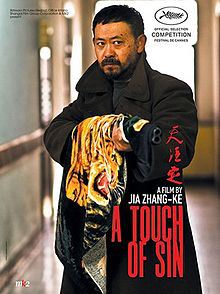 A Touch of Sin  (天注定), mainland director Jia Zhangke’s new movie, is certainly not a tourist flick.  While Jia’s cinematography in the movie lends itself to beautiful sweeping vistas of various parts of China, including the gorgeous Three Gorges area, the focus of the film is on the underbelly of China.  An underbelly that is increasingly prevalent across the country and as Jia vividly, artistically and intensely demonstrates, increasingly violent.  To understand present-day China and the pressures, challenges and threats it faces, that underbelly must be seen.

The four narratives that tell the story of A Touch of Sin are not mere embodiments of Jia’s mind. Rather they are ripped from the headlines or more aptly, from weibo, the Twitter-like microblog where news events are often first reported by average citizens, quickly spread throughout the country, and then suppressed by the central government.  Two of the narratives – the murder of an attempted rapist by his sauna worker victim and the suicide of a young factory worker in Dongguan – will be well known to many China watchers as the Deng Yujiao Incident from 2009 and the 2010 Li Hai suicide at Apple’s Foxconn factory in respectively.

The other two stories – that of Dahai (played by the teddy bear-looking Jiang Wu), a villager in a Shanxi coal mining town angry at the corruption that has allowed the selling of the state-owned mine to benefit a select few, and the story of Zhou San (well played by Wang Banqiang), a hitman returning to his less than grateful family in Chongqing for Chinese New Year – are perhaps less well known outside of China.  But, in the case of Dahai, the comparison between the shockingly savage beating which he experiences and that of real-life Chinese artist and dissident Ai Weiwei’s assault can’t help but be made: both receive a beating by officials (or quasi-officials) in response to their attempts to seek transparency and accountability of “the people’s government” and both have eerily similar head wounds.

In an interview at Asia Society (a must watch before seeing this movie), Jia described his movie and the characters in it as on a quest for dignity – 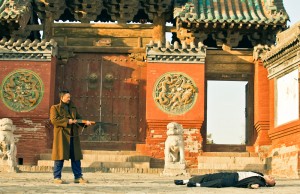 dignity in a society that is increasingly unequal, dignity in a place that appears to have left so many behind, and dignity in a country where without the rule of law to objectively handle society’s strains, violence is the only answer.

But while Jia’s story certainly focuses on reclaiming that dignity, it is unclear if that is what motivates the individual characters.  For Dahai, does his murderous rage come from a true feeling of societal injustice or from a lack of opportunity to share in the wealth?  It is unclear that if Dahai was put in the same position as the corrupt local officials or his schoolmate, that he wouldn’t have jumped at the opportunity.  Is Dahai a “hero” because he had nothing left to be?

The same questions emerge with Zhou San, the hitman.  Does he really choose this lifestyle because it is the only path he can take?  Or is he a lonely, degenerate unable to maintain healthy relationships even with his own son?  The innocently young Foxconn worker (played by Luo Lanshan) leaves you wondering what motivates his suicide – is it the pressures of the factory life or unrealistic expectations about what life is and what to expect?  Only the sauna worker, Xiao Yu (aptly played by Jia’s beautiful wife Zhao Tao), seems to regain her dignity in the traditional sense.  After receiving a beating from her boyfriend’s wife and her henchmen, Xiao Yu doesn’t take a second beating sitting down.  Instead, she kills the man trying to rape her with a fruit knife.  The movie closes with a return to Xiao Yu’s story, where she has had to flee her village and find a new life.  But even with her apparent restoration of dignity, her life still seems like a hopeless, lonely mess. 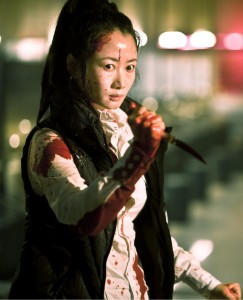 Xiao Yu in her murderous rage

This lack of clarity concerning motivation is what makes A Touch of Sin a fascinating movie and ultimately leads the viewer to realize that the individual stories are less important for Jia than the overarching story of that harsh reality known as present-day China.

That is perhaps what will leave the Western viewer perplexed the most – is this really today’s China?  My movie companion and China-hand (who likes to refer to herself as “your good friend Cynthia Nixon”) questioned if Jia’s movie is in fact present day China and if A Touch of Sin is an accurate portrayal.  Definitely there is a lot of violence in contemporary China; but there always was.  It’s not like 1949 to 1976 was some walk in the park: first the killing of landlords, then the Great Leap Forward, then the Anti Rightist Campaign, and the finally the Cultural Revolution.

But Jia is not attempting to give us a complete perspective of modern day China; nor should he or his art be burdened to do so.  Instead, Jia is attempting to show us the future – that if the Chinese government doesn’t curb the rampant corruption that has corroded China, if it doesn’t deal with huge inequities in both wealth and power, if it doesn’t find a legitimate outlet for society’s inevitable anger (like an independent and functioning legal system), then the violence that permeates his movie will soon be more than just a story from weibo.  It will be destined to be a commonplace occurrence.

This premise might be the reason why Jia’s A Touch of Sin might not make it past the Chinese government censors.  According to Jia, the censors have okay’ed his film and rumor has it that it will begin to be shown in China in November.  There are reasons why the censors might be okay with A Touch of Sin.  Philana Woo over at Jing Daily does a great job of explaining why the film “bows” to censorship, namely by avoiding the obvious – an outright attack of the central government.  Dahai’s issues are local, the central government is never implicated in the decision to sell the mine to an insider who retained all the profits.   Even the story of Xiao Yu was toned down.  Deng Yujiao, the real-life sauna worker Xiao Yu’s character is based on, was attacked not by local businessmen (as Xiao Yu was in the movie), but rather by government officials.

But with its emphasis on China’s increasing violence, A Touch of Sin questions one of the central tenants of the Chinese Communist Party’s 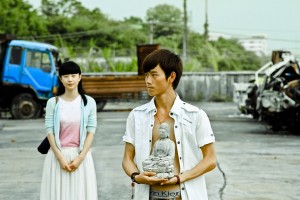 (CCP) rule: that the Party’s specific type of leadership is necessary to promote “social stability.”  But with the Party’s inability to deal with the rampant corruption and the increasing inequities in Chinese societies that leave individuals with no other choice but to resort to violence, the myth that is the Party’s promise of social stability becomes apparent.  Jia is looking for an alternative.  Religion, including Catholicism and Buddhism, deftly punctuates key scenes.  Traditional Chinese culture including opera plays and old novels keep returning in each scene.  And Jia has repeatedly mentioned that without a fair legal system, people are left with vigilante justice.

It is this conclusion – that the Party’s version of social stability is a mirage and that there needs to be an alternative be it religious, cultural or legal – that ultimately makes A Touch of Sin subversive and could railroad its showing in China.  For our readers outside of China, make sure you see this one as it is a thought provoking, beautifully shot film.  For our readers in China, get the bootleg copy from your local VCD store.

A Touch of Sin is currently showing in New York City through October 17 at IFC and Lincoln Plaza Cinemas.  It will then travel throughout the United States.  For schedule, click here.  A Touch of Sin will allegedly open in China in November.  For readers in China, we look forward to your feedback when (or if) this movie opens there.