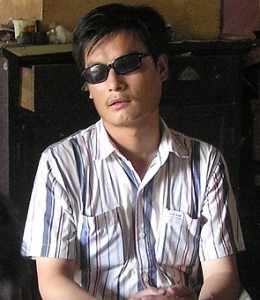 One would think that a poor, illiterate, blind man, who eventually learned to read in his early 20s, taught himself the law, and used those legal skills to protect the rights of society’s most vulnerable, would be celebrated.

Unfortunately, that is not the case for Chen Guangcheng.  Chen, a blind, self-taught lawyer in rural China who blazed the way for China’s nascent disability rights law is currently under unlawful house arrest with his wife and two small children, guarded 24 hours a day by local thugs, denied access to medical care as well as to all visitors and at times subject to physical abuse.

While this has been the status quo for Chen and his family since September 2010, the situation has just become more dire.  Chinese Human Rights Defenders (CHRD), a well-respected China human rights group, reported last week that a sympathetic guard informed CHRD that Chen has grown increasingly ill, collapsing after walking only a few steps in his yard.  Chen suffers from severe gastroenteritis, a condition left untreated while he served an unjust four-year-and three-month prison term and that still remains untreated even though he is “free.”

It is time that the United States’ government publicly expresses its concern for Chen’s health, question the legal basis of Chen’s current house imprisonment, highlight China’s violations of international law treatment in its treatment of Chen, and demand that China follow through with its invitation to the UN High Commissioner of Human Rights to visit its country. Recent developments reflect that international pressure may change the Chinese government’s behavior.

How Did Chen Guangcheng Go from Good Guy to Enemy of the Chinese State?

Chen’s short legal career centered on fighting for the rights of China’s most vulnerable: those with disabilities.  After winning a series of cases, including one requiring the Beijing subway system to waive fares for the disabled, Chen turned his attention to a new injustice that was occurring in his own hometown in Linyi county in Shandong Province.

In early 2005, Chen’s neighbors began to tell him stories of forced abortions, forced sterilizations, and even abduction and physical abuse of relatives by government officials so that the 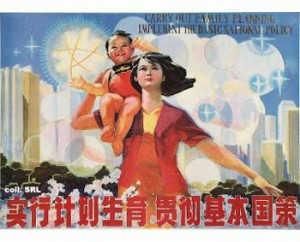 While China maintains a one-child policy, forced abortions and sterilizations are illegal under Chinese law.  Unfortunately, as an investigation by Chen and supportive lawyers from Bejing uncovered, because local officials’ promotions are tied with keeping birthrates low, the law criminalizing forced abortions and sterilizations is sometimes ignored, especially in rural areas.  By the summer of 2005, Chen filed multiple lawsuits in Linyi on behalf of many of the victims.

But as Chen was to find out, China’s legal reform only goes so far: fighting for the rights of the disabled are acceptable; but cases challenging China’s sacrosanct and politically sensitive one-child policy are decidedly not.  Even a well-respected, blind rights lawyer puts his safety on the line if he seeks to challenge the administration of the one-child policy.

In what amounted to kangaroo justice, in September 2005, Chen was placed under strict house arrest by the Linyi government, eventually charged with “gathering crowds to undermine traffic order,” found guilty in a trial where his lawyers were not allowed to attend, and in 2006, sentenced to four years-and-three-months in prison.

In September 2010, Chen completed his four-plus-year jail term only to learn that his home would become his prison.  Lacking any legal basis under Chinese law and in contravention to multiple international treaties, since his “release,” Chen and his wife have not been able to leave their home.  Chen’s six-year old daughter, Kesi, was initially denied access to school.  But, after much domestic and international pressure, Kesi is now permitted to go to school, walked to and from school by the thugs who surround her home, unable to play with any of her classmates.

Freedom House reportsthat Chen and his family are completely surrounded by thugs hired by the Linyi government to keep all visitors out and keep Chen in.  It is estimated that the 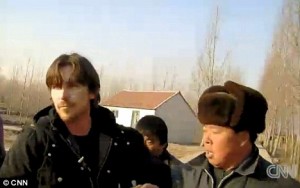 Christian Bale, accosted by Linyi "security guards" in his attempt to visit Chen Guangcheng in December 2011

local government has hired almost 100 men to maintain 24-7 surveillance of Chen and his family.  These thugs resort to force to keep all visitors out, physically attacking Chen’s friends, reporters, foreign government officials, and even Batman star Christian Bale who attempted to visit Chen last December.  Freedom House also reports that surveillance checkpoints points have been set up on various roads into the village, six cameras positioned throughout the village to record all activity and two cell phone jammers make it impossible for Chen and his family to communicate with the outside world.

In February 2011, a sympathetic government source smuggled to ChinaAid, a U.S.-based China human rights group,   a video recording that Chen made of his new life.  Soon after ChinaAid posted the video to its website, the Linyi thugs entered Chen’s home and beat him and his wife for close to two hours.  After the severe beating, Chen and his wife were denied medical treatment.

The continued denial of all medical treatment and Chen’s worsening gastroenteritis has appeared to raise Chen’s medical condition to emergency status, distressing his friends and supporters. Chen’s longstanding friend lawyer Jiang Tianyong, himself the victim of ‘forced disappearance,’ retweeted a recent comment from another that ‘everybody’s now just waiting for the news that Chen Guangcheng has died; so we can erect a memorial for him….’ Jiang’s immediate and emotional reaction to any thought that his friend could die: ‘you’re really sick.’

Prof. Jerome A. Cohen, a Chinese legal scholar with over 60 years of experience in China likely thought that China’s worst was behind it.  But the current situation with his friend Chen Guangcheng visibly alarms the old China hand.  “This cruel, slow killing seems to be the only way the Party can think of to rid itself of a courageous critic without having him appear to die in its custody” Cohen told China Law & Policy.

Will International Pressure Change the Chinese Government’s Treatment of Chen?

On one level, the internationally community doesn’t have a choice if it wants Chen Guangcheng to live.  But on another level, pressure in this case would be a smart strategic move.  Although the Chinese central government is fully aware of the abuse of Chen and his family, it isn’t directly perpetuating it.  The torture of Chen and his family is largely the result of Linyi’s officials’ vengeance.  In statements to foreign officials, Chinese officials have allegedly explained that “house arrest does not exist under Chinese law” and that Chen is free and leading a “normal life.”

If foreign and domestic pressure remains strong, the Chinese central government will have less of an incentive to acquiesce to the Linyi’s government blatant violations of Chinese law.  Other signs seem to indicate that not everyone in the Chinese government is on board with Linyi officials’ behavior.  Although Chen and his family are being held completely incommunicado, information is still able to get out.  ChinaAid receives information, including the smuggled video and letters from Chen’s wife, from a “reliable government source;” CHRD learned of Chen’s worsening medical condition from a sympathetic guard. 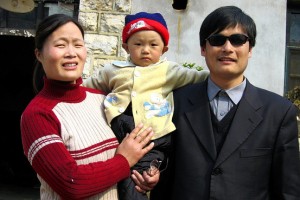 In October 2011, the Global Times, a state-run newspaper that is considered the voice of the Chinese Communist Party’s hardliners, published an editorial attempting to distance the central government from Linyi government’s actions.   As CHRD reported in “Let There Be Light, Let There Be Sincerity: Citizens Campaign to Free Chen Guangcheng,” there is a growing citizen campaign to free Chen, even with the censorship of most news regarding Chen.  In December 2011, several of Chen’s collegues and friends made a film about Chen – “Who is Chen Guangcheng” – publicly calling for his release (film is in Mandarin with no subtitles).

Foreign governments should hold the Chinese government to its statement that Chen is leading a “normal life” and specifically request that Chinese government officials accompany foreign officials to visit Chen Guangcheng.  Given his worsening condition, foreign governments should make this a priority.  Vice President Xi Jinping’s visit to Washington, DC offered the perfect opportunity to publicly raise the U.S. government’s concern for Chen’s health; unfortunately it didn’t.

The United Nations should bring public attention to China’s clear violations of the of Universal Declaration of Human Rights (Article 25, the right to adequate health) as well as violations of treaties it has voluntarily ratified including: the International Covenant on Economic, Social and Cultural Rights (Article 12 for denial of medical care); the Convention on Rights of Persons with Disabilities, and the Convention on Rights of the Child (for denying Kesi the freedom of association (Article 15), for the mental anguish caused by her imprisonment (Article 19), for denying her the right to play (Article 31)).   In addition, the Human Rights Council should look to issue a new opinion concerning Chen’s arbitrary detention to update its 2006 opinion when Chen was first held under unlawful house arrest.

The fact that China verbally commits to human rights reviews and ratifies certain conventions demonstrates that international status means something to it; not necessarily enough to always abide by human rights laws, but enough for international pressure in the case of Chen to make a difference.

What About the Forced Abortions, the Issue that Caused all of this?

In September 2005, soon after Chen was placed under his first house arrest, China’s National Population and Family Planning Commission, the government agency that oversees China’s

one-child policy, conducted its own investigation and announced that government-enforced abortions and sterilizations occurred in Linyi in contravention of China’s law.  Although many officials were arrested and penalized for their behavior, Li Qun, the mayor who initialized Linyi’s campaign of forced abortions, was eventually promoted and today serves as Party Secretary of the major metropolis Qingdao.

Li’s promotion demonstrates the importance of people like Chen Guangcheng, those willing to put their lives on the line to protect citizens’ rights and dignity; rule of law might not be what local governments want but it is what the Chinese people are desperate for.

Below are sources that can provide more information on Chen Guangcheng, his legal career and his current struggle: