Posts tagged: China as a superpower

China As a Global Superpower: Merely Aspirational or Actually Achievable?

The second in a series of three articles regarding China, On the Road to 2025.  Click here for Part 1. 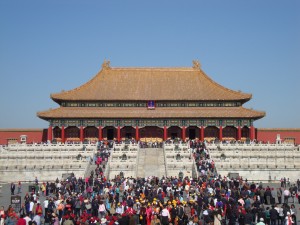 China set to rule the world?

The second panel in last week’s “China 2025” conference covered a range of topics related to China’s foreign policy, falling under the loose rubric of “China Goes Global.” Michael A. Levi and Adam Segal, both of the Council on Foreign Relations, discussed two functional areas of Chinese foreign policy, namely climate and technology policy, while Ambassador David H. Shinn of George Washington University and Evan A. Feigenbaum of the Council on Foreign Relations addressed regional issues.

Though he was not the first to speak, Ambassador Shinn provided a useful framework for understanding not just China-Africa relations, but Chinese foreign policy-making more broadly. Three of China’s core interests in Africa, he argued, are its needs for (1) resources, (2) political support, and (3) productive commercial ties. With regard to the first of these, China has of course sought access to a range of Africa’s natural resources such as petroleum, timber, and minerals. In terms of China’s second need, though political support from African nations may not seem, on its face, as though it would be of extraordinary importance to China, Ambassador Shinn noted that four of the 53 African countries have diplomatic relations with Taiwan. For China, eliminating support of policies at odds with the “one China” policy is imperative, and Beijing spends a relatively large amount of time and effort in attempt to woo these four countries away from their current policies. Third, though Africa is not among China’s largest trading partners, China is Africa’s second largest trading partner, after the United States. And, China will likely become Africa’s largest trading partner next year, said Shinn.

Locating these three drivers of Chinese foreign policy – access to resources, political support, and an international environment conducive to economic growth – provides a useful understanding of what motivates China in its approach to the rest of the world.  Indeed, as an authoritarian government with sometimes questionable legitimacy, much of the Party-state’s justification for a continuation of its rule is now located in its abilities to increase the economic wealth of its citizens and to gain respect and exert influence internationally. Accessing the tools and conditions for economic growth as well as gaining outside political support therefore become crucial to the life of the Party-state. Though perhaps easy to ignore, the role of China’s domestic needs in its foreign policy decisions should not be underestimated.

As we seek to better understand Chinese foreign policy, its ‘go global’ policies, and their possible effects on U.S. interests, there are other myths which need to be dispelled. In their presentations on climate and technology policy, both Levi and Segal made particular note one of the idiosyncrasies of U.S. discussions and media presentations of China—that is, of the propensity for focusing on gross numbers and their Brobdingnagian dimensions. All numbers in China, both noted, are huge. But that does not necessarily make them meaningful. Segal noted, for example, that there has been an enormous increase in spending on research and development in China, but that innovation is more than simply spending. And expectations that China will become a technological superpower by 2025 are likely overblown. Similarly, China should not be viewed as eating U.S. lunch on clean-tech just because it is producing enormous quantities of solar panels, or has calls in its 11th Five Year Plan for reductions of 20 percent in energy intensity. With regard to the latter, China has created targets, not outcomes, and few, if any of these are on track to be achieved.

In sum, Adam Segal’s argument that China has embraced but will not profoundly change the global science and technology system is perhaps the most balanced view of Chinese ‘go global’ policies more generally. Many such policies and pronunciations are aspirational, but not, by 2025, achievable.