Tom Friedman Admits to Not Understanding China…So Why Does He Write About It? 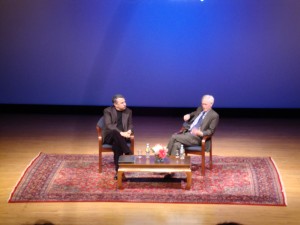 New York Times columnist Tom Friedman is not a China scholar and knows little of China; that was his mantra in response to questions about China’s development at Monday night’s “The U.S. and China: How Should Americans View the New Balance of Power?” sponsored by the Asia Society (watch full video here).  While statements admitting to an utter lack of knowledge on the subject matter are usually fatal to a key speaker’s effectiveness, for Friedman and the 90 minute event, at times it worked and gave one pause to think of the United State’s own future.

In an Oprah-like setting, Orville Schell, director of Asia Society’s Center on U.S.-China Relations and one of America’s preeminent China scholars, sat down with Friedman to muse about China’s rise vis-à-vis the United State’s current economic and political stagnation.  Friedman sees China’s rise as a result of its adoption of a “get-it-done” attitude, an attitude that the United States once had but seems to have lost.  For Friedman, it is this attitude that allows China to quickly build amazingly modern structures like the Tianjin Convention Center in just over eight months while the United States languishes with broken escalators in Penn Station for months at a time.  The fact that China has cheap, and sometimes unpaid, migrant labor and shoddy construction standards didn’t seem to register with Friedman, although Schell did raise the issue.

Throughout the evening, Friedman highlighted China’s achievements with scant regard to China’s drawbacks.  But at one point, Friedman acknowledged the one-sided nature of his analysis, arguing that it was necessary to examine China’s current success to see what it is we, the United States, need to improve.  Friedman’s hyperbolic analysis of China was at times irritating, but he did have a point.  China does appear to “get-things-done” – arguably it has not suffered the same economic setback as the U.S. and it is able to achieve certain goals, such as becoming a global power in green technology.

Yes, Freidman acknowledged, China does have an authoritarian regime that is easier to manage than a burly 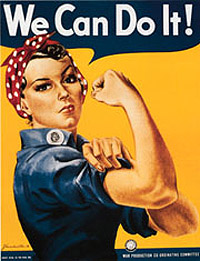 Epitomizing the Get it Done Spirit - Rosie the Riveter

democracy; but as Friedman noted, what it is about China that we envy are the values it adopted that we once held.  It used to be the United States that could get things done, that could put a man on the moon, “not because they are easy but because they are hard.”  Friedman wondered –  where did that spirit go.  “We have nothing to learn from China” Friedman stated, we merely have to reclaim our traditional values.

While Friedman believed that the forces driving China today are the same forces that drove us to become a superpower many decades before, Schell had a more nuanced analysis of China’s rise.  In answering his own question as to where China’s energy to “get-things-done” comes from (which also elicited Friedman to open his laptop and take notes for his new book), Schell put China’s rise into its own historical context.

For Schell, China’s energy comes from its people’s own desire to be great.  In examining China’s modern history, Schell noted that China has been a failure – the 20th Century began with the collapse of the dynasty system; Sun Yat-sen’s short rule brought no great success, Chiang Kai-shek’s republican period provided less, and Mao’s reign merely created a larger and poorer population.  It was not until Deng Xiaoping’s presidency (1978-1997) that China started to become successful and regain the greatness of antiquity.  For Schell, this desire to be great is an important motivating factor and allows the Chinese people to forgive its government for many of its shortcomings.  Although Schell did not mention it, China is not alone in its desire to be great; arguably the United States belief in itself as a “beacon the hill” has had an equally motivating quality. 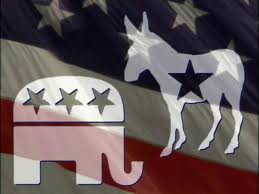 But the discussion soon returned back to the United States and its recent stagnation in light of China’s rise.  How did the U.S. lose its path Schell wondered.  For Friedman it is largely emblematic of our polarized politics – polarization about all the wrong things.  Instead of focusing on our failed education system or our deteriorating infrastructure, politics focuses on rhetoric and is unable to create the policies that will guide the U.S. in a new world in this new century.

How can we get that back?  For America, the future has yet to be written according to Friedman, but there will need to be a catalytic event for America to regain its focus.  Our democracy was designed as such; with its checks and balances, its multiple voices, only through a catalytic event can the United States purposefully move forward.

Monday night’s talk was interesting not for its China analysis but for its scrutiny of America’s current status.  Friedman certainly paints China with a wide brush and it’s easy to critique Friedman’s arguments pertaining to China. But it’s important to be open to his message about America.  China has become a global leader in green technology; the U.S. still has members of Congress who do not believe in climate change.  A green technology bill that likely would have created jobs and put the United States at the front of an nascent industry was unable to pass the Senate.

Americans feel anxious about China’s rise, but it is not necessarily China’s fault. For Friedman, America still has the goods to succeed, it just needs to push aside the white noise of today’s politics and reclaim its values.  And that is why he writes about China.  Whether that can be done has yet to be seen.  But Friedman remains hopeful; frustrated but hopeful.

Tom Friedman’s co-authored book is now available in stores: That Used to Be Us: How America Fell Behind in the World It Invented and How We Can Come Back

One Response to “Tom Friedman Admits to Not Understanding China…So Why Does He Write About It?”