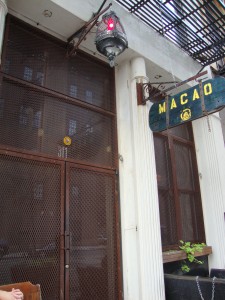 ***NOTE – On a return back to Macao Trading Co. in October 2011 (just for drinks), no longer on the menu were the to-die-for-lamb-chops. Given that the lamb chops were the best thing listed in the review, it’s questionable if a trip to Macao is worth it. Certainly the ambiance is still there and it would still be a good place for your out-of-town mother-in-law, but the food is only average; edible but average.***

Macau may be a tiny island neighboring Hong Kong, but it has an air larger than life.  The first and last European colony in the Far East (the Portuguese arrived in Macau in 1557, leaving 400-odd years later in 1999), Macau still maintains the romantic feel of its colonial past, where East meets West in the culture, architecture and food.  But with the romantic, there is also the illicit air of Macau’s colonial past.  As the gambling mecca of Asia since the 1850s, organized crime has permeated, controlling Macau’s largest industry – the casinos – and in many ways, its government as well.

But it’s this feel of illegality that makes Macau attractive and the backdrop for some of Hong Kong’s best gangster films.  So when my friend suggested that we have dinner at Macao Trading Company in New York City’s Tribeca, I was excited at the chance to be transported back to the mysterious and dark Macau.

Unfortunately, Macao Trading Company doesn’t exactly live up to its namesake, but not for want of trying.  The bar area of the restaurant could easily be found in the streets of Macau, with strong teak wood elements, Buddha statutes, and iron fans.  But as I sat there, sipping on a glass of Portuguese wine, waiting for my dining companions, I realized that the fault lied more with the customers.  Americans just don’t do colonial sleazy nearly as well as their European counterparts; we are too earnest I suppose.  But in order to help overcome such a deficit, the bar offered a wide selection of drinks, with specialty cocktails starting at $14 each (including a $15 mai tai).  Stick with the Portuguese white house wine.  It was tasty and refreshing on a hot and humid New York City summer night.  As soon as we were seated, we immediately ordered a carafe.

While we were expecting fusion, the menu was largely divided between solidly Portuguese dishes and decidedly 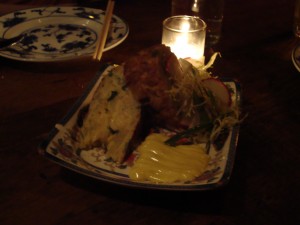 Chinese ones, with some Chinese dishes oddly of the Sichuan-style rather than Cantonese (which would be the native type of Chinese food in Macau).  We decided to start our adventure with a Portuguese dish – Tortilha do Macao – a lump of crab meat and potato, with a curry dipping sauce.  It was a heavy mix, with a comfort-food type texture but without any of the consoling flavors.  It was too much potato with almost no flavor of the crab and absent the curry dipping sauce, the tortilha do macao would be a dry lump of nothingness.

The grilled lamb chops on the other hand were almost divine.  Or at least I thought so.  Initially we hesitated ordering the lamb chops because they were listed on the “small plates” side of the menu, 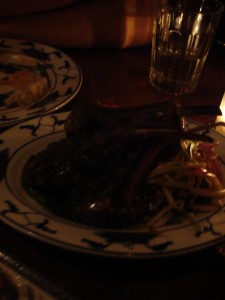 and we are three people who like to eat lamb.  But the portion size was good – with more than enough for two servings each.  The on-the-bone lamb chops were perfectly tender with a smokey, barbecue taste.  Flawlessly complementing the lamb was a light and savory garnish of bean sprouts, radish, peppers and mango.  For me, the mix of these flavors is Macau.  My dining companions were a little less impressed, noting that lamb chops are a Cantonese specialty (this I never knew – how many times you go to Hong Kong and see lambs walking around?) and that lamb chops this good could easily be found in Flushing, Queens, at a cheaper price.  While this might be true, any trip to Macao Trading Company is not complete without these lamb chops.

Our next dish was a decidedly Chinese and one of my favorites – Ants Climbing the Tree.  While not an appetizing name, ants climbing the tree is a dish of glass noodles with minced pork and a red chili sauce.  It can be a fulfilling, flavorful dish but Macao Trading Company’s version falls far short of the ideal.  There was no distinction in flavors with the chili sauce overpowering everything else and the noodles too pasty. 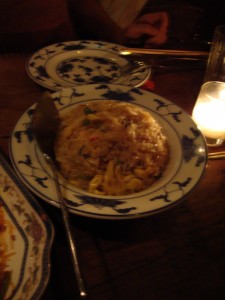 Fortunately we ended our meal with a bang, the Bacalao Fried Rice – a very Cantonese dish that one dining companion commented was a dish her aunt would make if she was feeling experimental (note that in traditional Chinese cooking, the key is never to experiment but rather to perfect).  The flavor of the salted cod was perfectly pronounced and the use of jasmine rice was brilliant.  With the lamb chops, the bacalao fried rice was off the charts.

With its Tribeca address and dim lit interior, Macao Trading Company, as one of my dining companions noted, is the perfect place to bring your mother-in-law who is visiting from Cleveland and wants a crazy night out on the town.  But its neither terribly crazy nor terribly good.  At the very least though, the check won’t set you back too much.  With five dishes and a carafe of house wine, the bill came to $114 with tip ($38/each).  Macao Trading Company also picks up after hours, staying open till 3:30 AM.  The heavy food could be good to sop up some alcohol and after a night of partying the lack of flavor in some of the dishes will likely go unnoticed.  But in general, Macao Trading Company is average; if you’re in the neighborhood and want ambiance, give it a shot.  Just know what to order.