U.S.-China Strategic & Economic Dialogue Will Be Anything Less than Dull

Only a handful of the 200 U..S. officials at today's Strategic & Economic Dialogue in Beijing

The second U.S-China Strategic & Economic Dialogue (S&ED) is off to an interesting start in Beijing.  The U.S.’ agenda for the talks – agreement on Iran sanctions, change in China’s currency policy, and greater openness of China’s procurement market for foreign companies – was largely overshadowed this morning by South Korea’s announcement that it will hold North Korea responsible for the torpedo attack on a South Korean war ship, the Cheonan, in March 2010 which resulted in the death of 46 sailors.

As the S&ED was set to open in Beijing, South Korea’s president, Lee 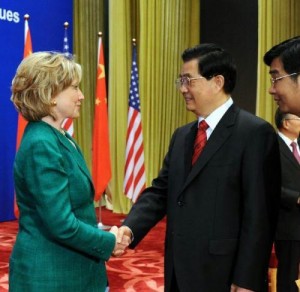 Myung-Bok, issued the strongest statement against North Korea in decades and announced that all trade between the Koreas would be suspended, investment would be stopped, and North Koreans would not be permitted to visit South Korea.  Additionally, South Korea will also reinstall megaphones at the border between the two countries and resume anti-North Korean broadcasting, a practiced it stopped in 2004 when tensions were easing between the two Koreas.  Previously, North Korea stated that any retaliation by South Korea in response to the Cheonam incident would be seen as an act of war; today it announced planned attacks on any South Korean megaphones at the border.

In her remarks during the S&ED’s opening ceremony, Secretary of State Hillary Clinton, who is accompanied by 200 U.S. officials on this trip, brought up the issue of North Korea’s increasing “belligerent” actions and the need for the U.S. and China to work together in regards to North Korea.  Chinese President Hu Jintao did not mention North Korea in his speech.

But President Hu did bring up the currency issue in his remarks, to the surprise of most.  In his speech, President Hu promised that China would continue to reform its currency policy, but noted it would be on China’s terms and such reform would be gradual.

With the delay of the Treasury Department’s report on China’s currency policy and recent op-eds in the state-controlled Chinese press regarding the need to give more flexibility to China’s currency — the yuan — it appeared that China would make some sort of concession on the currency issue.  However, the recent crisis in Greece and the European Union, which has resulted in a 20% drop in the value of the Euro against the dollar, changed that opinion.  By effectively tying the yuan to the dollar, as the dollar gets stronger against the Euro, Chinese goods become more expensive in the European Union, China’s largest export market.  So President Hu’s promise to do something about China’s currency policy was a bit of a surprise.  And the public nature of the comment was even more surprising since the revaluation of the yuan is a hot-button issue for the Chinese domestically: Beijing does not want to appear to be placating to U.S. demands.

But what remains to be seen is when: when will China adjust its currency policy.  Don’t expect that question to be answered at the S&ED which concludes Tuesday afternoon.