Trash in China – A Pollution Problem that Could Choke the World

Last week, Taliesin Thomas, in her review of Song Dong’s current exhibit at the MoMA, observed that “[f]or all that we can posses in this life, in the end we leave the entire corporeal world behind, entrusting someone else to manage the 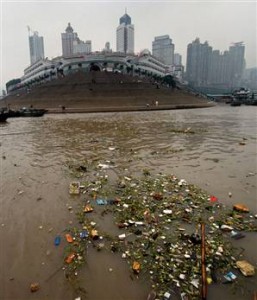 Trash in the Yangtze River

articles of our former existence.”

But where does all this “stuff” go?  For Song Dong’s mother, it sits in a museum.  For the billions of other Chinese people, their “stuff” and trash ends up in landfills; and China is becoming overwhelmed by the amount of trash that its population increasingly produces.

China’s Legal Daily, in an article published yesterday, provided some sobering numbers.  Every year, China’s cities produce 150 million tons of trash, with a litter growth rate of over 10% per year.  The Legal Times estimates that the amount of trash sitting in Chinese cities’ landfills has reached 7 billion tons.

Beijing alone produces 18,400 tons of trash per day, 6.7 million tons per year, quickly filling Beijing’s 23 landfills.  By 2010, the Legal Daily estimates that 10 of these landfills will be filled to capacity and closed.  Experts hypothesize that with the increasing growth in Beijing, all of its landfills will reach capacity within five years.

For China, this is more than just a space problem; it is also a health hazard.  As the NY Times reported this week in an interesting article about trash in China, as trash decays, it emits large amounts of methane, a greenhouse gas that is more effective in trapping heat in the atmosphere than even carbon dioxide.

As a result of this trash problem, China has begun to look to incineration of trash as a solution, creating a global hazard if strict limits on emissions are not enforced.  As the NY Times points out, such limits differ widely from city to city in China, and even within cities.  In general, communities of the affluent and well educated impose stricter limits similar to those in Europe and the U.S. while across town,  incinerators barely meet the loose requirements imposed by the national government.

China’s national government has allowed slack restrictions imposed years ago on incineration emissions to remain in place due to a power play amongst the various agencies that have overlapping jurisdiction on the matter.  Currently, national emission standards allow for 10 times the level of emissions allowed in Europe or the U.S.

China’s trash is not merely a domestic problem but impacts the world.  Pollutants from trash incinerators in China, like mercury and dioxide, have made their way to the Pacific coast of North America.  As China seeks to increase the number of incinerators, with the currently slack limit on emissions, the U.S. will suffer.  But China has made progress.  Its growing middle class will no longer tolerate such environmental hazards, as evidenced by the incinerators in these neighborhoods that emit almost zero pollutants.

U.S. policymakers need to see this as progress and instead of walking away from the table in Copenhagen, look to continue this progress and work with China to develop the capacity to institute limits that benefit not just the wealthy in China, but even the poor.  China is a big country and this will take time.  But if ever there was a more dire sign that the U.S. needs to reach an agreement with China in Copenhagen, their trash is it.