Just For Fun: Song Dong’s “Waste Not” Exhibit at the MoMA

For those of us in NYC without a home in the Hamptons for the summer, every Friday, the question inevitably arises – what to do this weekend.  If you are sticking around the city, China Law & Policy recommends that you check out Song Dong’s new exhibit at the Museum of Modern Art (Friday nights are free, FYI).

In this inaugural post of the “Just for Fun” series, Taliesin Thomas reviews Song Dong’s exhibit “Waste Not.”

Taliesin Thomas is the Director of AW Asia, a private organization in New York that promotes the field of Chinese contemporary art through institutional loans and museum acquisitions, curatorial projects, publishing, and educational programs (www.awasiany.com). Ms. Thomas is also currently an MA candidate in East Asian Studies at Columbia University and a specialist in the field of Chinese contemporary art. She lived in rural Hubei Province , Central China from 1999-2001. 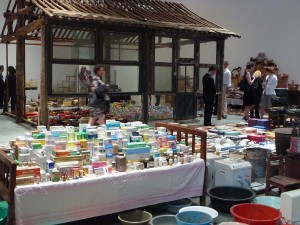 Right now New Yorkers have the opportunity to step inside a genuine chapter of twentieth century Chinese history at the Museum of Modern Art (MoMA). An installation by Song Dong, titled “Waste Not”, is both a portrait of Chinese culture and a homage to the artists’ late mother. The exhibit is more than just a nostalgic presentation of personal effects; it is a devoted work of art by one of China’s most talented and conscientious contemporary artists.

In 2002 Song Dong’s father died, and his mother became isolated and withdrawn. She amassed more and more belongings in an effort to console her grief. The result was a home filled with emptiness. Song Dong approached his mother about turning her possessions into an art piece that would bring renewed meaning to these old objects. After her initial protest, she gradually assisted him in organizing the contents of her house. This process pulled her out of her sadness, and re-engaged her with the stationary material life that she had built up around herself.

A veritable Chinese treasure chest turned upside down, the dense display of numerous weathered household items arranged in MoMA’s atrium is an intimate portrait of one woman’s world. That woman died unexpectedly early this year while trying to save a wounded bird high up in a tree. Song Dong’s careful placement of his mothers physical reality reflects a lovingly organized memoir, with individual items appearing like stanzas of an epic poem. In this particular verse, one can almost hear the bittersweet song of the bird.

I had the opportunity to hear Song Dong speak about his “Waste Not” project at a lecture that he gave at Pace Wildenstein gallery several days after his MoMA debut. Hosted as an evening art salon in conjunction with the China Institute, the talk was a beautiful addendum to his installation. Song Dong eloquently described the impetus for this project, revealing personal family stories that increased my appreciation for the energy, consideration, and effort that went into creating “Waste Not”.

Standing there in the middle of his poignant art piece, I could not help but recall the basic premise of Buddhism: impermanence. For all that we can posses in this life, in the end we leave the entire corporeal world behind, entrusting someone else to manage the articles of our former existence. Song Dong’s filial piety brings Chinese contemporary art to a sincerely sacred place, one that is filled with reflection and hope.

One Response to “Just For Fun: Song Dong’s “Waste Not” Exhibit at the MoMA”