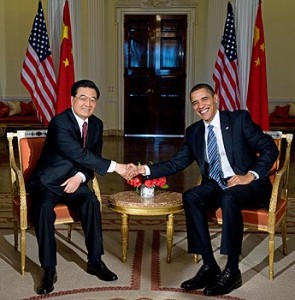 Needless to say, President Hu’s visit will come at an interesting time.  The State visit was not the only China-related news that the Administration announced on Wednesday; the Obama Administration also supported the United Steelworkers’ contention that China is illegally subsidizing its wind turbine industry by filing a suit in with the World Trade Organization.  And as trade issues continue to plague U.S.-China relations, North Korea’s recent bellicose actions against the South reflect the importance of China in maintaining peace in Asia while North Korea undergoes a leadership change.  Given the importance of the two nations to each other as well as to the rest of the world, a one-day State visit seems a bit short.  It will be interesting to see what deliverables emerge from the visit.

Office of the Press Secretary

The President will host Hu Jintao, President of the People’s Republic of China, at the White House on January 19 for an official State visit.  This will be the third State visit of the administration and reciprocates President Obama’s State visit to China in November 2009.

President Hu’s visit will highlight the importance of expanding cooperation between the United States and China on bilateral, regional, and global issues, as well as the friendship between the peoples of our two countries.  The President looks forward to welcoming President Hu to Washington to continue building a partnership that advances our common interests and addresses our shared concerns.

The President and Mrs. Obama will host President Hu for an official state dinner on the night of January 19.