The Economist’s Recent Piece about Genocide in Xinjiang is Wrong

It was disappointing to read The Economist‘s most recent piece about the atrocities in China’s Xinjiang province – “‘Genocide’ is the wrong word for the horrors of Xinjiang” given the hard stance it has taken in the past against the Chinese government’s violence, oppression and mass internment of Uighurs and other Turkic Muslims. But in its most recent article, by ignoring the sexual violence against Uighur and Kazakh women, The Economist demonstrates its lack of understanding of the crime of genocide under international law and perpetuates a misogynistic view of the crime.

Although sexual violence has been a key element of most genocides – from Armenia in 1915 to the Rohingya today[1] – the term rape does not appear in either the Genocide Convention or the Rome Statute of the International Criminal Court.  But the systematic rape of women has repeatedly been found to constitute the physical element of genocide.  In 1998, the U.N. Tribunal for Rwanda found former Hutu mayor Jean-Paul Akayesu guilty of genocide for the systemic rape of Tutsi women in his community.[2] Specifically, the Tribunal held that systematic rape constituted the genocidal act of “causing serious bodily or mental harm to members of the group.”[3] More recently, the U.N.’s Independent International Commission of Inquiry on Syria concluded that the Islamic State of Iraq’s (“ISIS”) systematic rape of Yazidi women and girls constituted the physical element of genocide: “Rape can be a measure to prevent births [another defined genocide act under the Convention] ‘when the person raped subsequently refuses to procreate, in the same way that members of a group can be led, through threats or trauma, not to procreate.’”[4]

But in arguing that genocide is the wrong word to describe what is happening in Xinjiang, The Economist ignores clear legal doctrine.  Allegations of rape in Xinjiang’s concentration camps have been circulating since at least 2019.  Earlier this month, the BBC reported on the systematic use of rape and sexual torture against Uighur women in the concertation camps, with different women, from different camps, describing the same horrific acts perpetrated by Chinese state actors. The eerie similarity in these women’s stories is what gives them credibility, especially as the Chinese government’s sole retort is to state that these sources are “untrustworthy.” The Chinese government has also failed to give the U.N. High Commissioner on Human Rights access to Xinjiang for an independent assessment of what is happening there.  If The Economist failed to mention these women’s stories because it doesn’t think these stories “prove” genocide, “we should long ago have shifted the burden of proof away from the refugees and to the skeptics, who should be required to offer persuasive reasons for disputing eyewitness claims.”[5]

In addition to ignoring the well-developed doctrine that mass rapes can constitute the physical element of genocide, The Economist implies that the only action that could be “intended to prevent births” is “the systematic sterilisation of all women.” As show above, the United Nations – and the world – moved away from such a narrow definition years ago. The Economist does a disservice to its readers – and female victims of genocide – by offering such an inaccurate assessment.

Ultimately though, it appears that The Economist wanted to make the argument that we shouldn’t get hung up on defining what is happening in Xinjiang as a genocide or as crimes against humanity; it’s all just a parade of horrors that need to end.  China Law & Policy has made this argument too (see here) since for both genocide and crimes against humanity, U.N. member states have the same “responsibility to protect.” But The Economist went too big in definitively stating that what is happening in Xinjiang is not genocide. The Economist does not know that and offers no proof or legal analysis; instead it merely states that genocide “exaggerates” the Chinese government’s crimes in Xinjiang.  But it doesn’t if you focus on the violence perpetrated against Uighur women.  The Economist – and the world at large – would be wise to heed the advice of Samantha Power in her authoritative book on the world’s missteps in stopping genocide in the past: “A bias toward belief would do less harm than a bias toward disbelief.”[6]

In this week’s Just for Fun section, guest blogger Thomas Cantwell, reviews the only authentic Uighur restaurant in all of New York.

Despite having a rich history, the Uighur (pronounced Wii-grrr) have largely flown under the radar of American consciousness until the recent violence in Urumqi which resulted in the death of nearly 200 people. The Uighur, a Turkic Muslim ethnic group living mainly in the Xinjiang Uighur Autonomous Region in the northwest of China 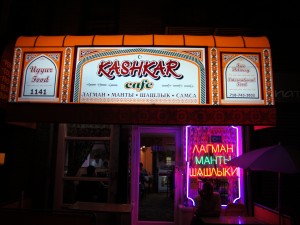 dominated the region for nearly a millennium before falling under Chinese control. Absent an arduous journey through rural China, the closest one can get to Uighur culture in New York is a visit to Cafe Kashkar, a Uighur restaurant in Brighton Beach.

Cafe Kashkar is definitely a cultural experience, though possibly more of a Brooklyn one than anything Uighur. Not having been to Xinjiang, it is difficult for this reviewer to judge whether the region is marked by unflattering florescent lighting, exact replicas of Alice Kramden’s kitchen furniture, and carpet so ugly it would embarrass a pitboss. The nonstop Uzbek music videos–think Bollywood thumping tunes sung by better-looking Borats, backed up by big-haired tramps dancing suggestively–played on the flatscreen television mounted above the cafe’s door do attest, however, to the pan-national character of the Uighur–significant populations are located throughout all of the Stans.

While not a choice for a romantic night out, one doesn’t go to Cafe Kashkar for the decor. My companions and I ordered a number of dishes that arrived as they were prepared, which seemed fun at Kashkar, with its tiny one-man kitchen, as 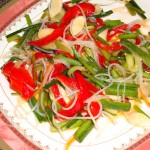 opposed to pretentious as it does at, say, Asia de Cuba. First was the Salad Langsai, a mix of cucumbers, peppers and another couple of unidentified vegetables in a vinegary/garlicky dressing. It was crisp and refreshing–perfect for a warm summer evening. Next came the Kashkar Soup, which contained lamb, vegetables, and noodles in a tasty lamb broth. The soup was light and satisfying. The server–probably the nicest waitperson in all of New York City–next brought out the naan which, aside from being made from grain, bears virtually no resemblance to its Indian namesake. A sort of giant, slightly-less dense bagel, the naan was bland and virtually tasteless, though it did serve as a vehicle for sopping up the remnants of the various soups and sauces.

Next up was the best dish of the night, the geiro lagman, a slightly oily noodle dish with meat (lamb, again) and vegetables. The noodles were thick and the sauce just spicy enough to be interesting without 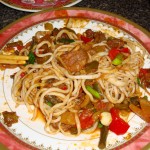 overpowering the taste of the meat and veg. We could have ordered another.
The manty, four giant dumplings stuffed with–you’ve got it–lamb (though mixed with beef just to shake it up a little) was so heavily laced with cumin that it tasted like cheap enchilada filling. Apparently wildly popular–you can buy frozen manty to go–you can secure a similar taste at any Taco Bell without having to haul all the way to the beach. The lamb kebobs, four fatty pieces of ribmeat that tasted of the grill, were enjoyed by my companions but I found them disappointing. Perhaps I was on lamb burnout by then.

Dessert consisted of chak chak, the only menu option available. Best described as a giant Rice Krispie treat made with honey rather than marshmallows, it was mildly sweet. American palates accustomed to sugar-laden desserts might be disappointed, though I found it a nice, light closing to the meal.

Cafe Kashkar has no liquor license, but our server specifically offered at the start of the meal the suggestion that we might secure beer from a nearby gas station. The Russian trio at the next table choose to enhance their dinner with a liter of off-brand vodka. We stuck with some pear and pomegranate/blueberry flavored soda which the server described as “Soviet” in origin and whose name I failed to note but that I’d definitely have again.
The total, before tip, was $41, a steal given the amount of food consumed. We tipped huge as the service was excellent. I’m not certain if Cafe Kashkar is worth a trip from the other boroughs–particularly in light of the upcoming suspension of B line service, which means a person could get to Philly faster than Brighton Beach from midtown Manhattan–but, if one finds oneself in Brighton Beach, Cafe Kashkar is a great alternative to New York standbys like pizza. Plus, it’s really, really fun to be able to have an excuse to use the word “Uighur”. 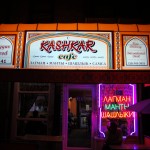 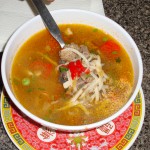 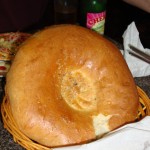 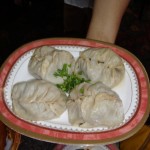 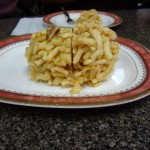