Without Committing a Crime, Five Female Activists Detained in China

One of the five detained, Wu Rongrong, founder and executive director of the Weizhiming Women’s Center in Hangzhou

While five of these 10 women have been released, five were officially criminally detained on Friday allegedly under the Chinese government’s increasing catch-all for ideas and speech it does not like: “picking quarrels and provoking trouble.” (Article 293(4) of China’s Criminal Law).

“It is extremely alarming that these five young women have been criminally detained for ‘picking quarrels and provoking trouble’” Dr. Leta Hong Fincher, author of Leftover Women: The Resurgence of Gender Inequality in China

, wrote in an email to China Law & Policy.  “The women were merely planning to commemorate International Women’s Day by raising awareness about sexual harassment on public transportation – hardly an issue that would threaten the central government’s power or social stability in any way.”

In fact, the Chinese government itself has noted the growing problem of sexual harassment – including groping, rubbing and pictures taken under one’s skirt – on public transportation.  Unfortunately, instead of stepping up law enforcement of this quality-of-life crime, the Chinese government has largely left it to women to combat this harassment, urging female riders to forgo wearing mini-skirts or “hot pants” and looking to have women-only subway cars during rush hour. 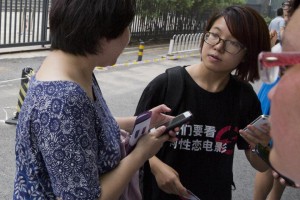 Another of the detained, Wei Tingting (right), 27 and director of Ji’ande, an LGBT rights organization based in Beijing

“The detention of these women reveals the hollowness of [the] Chinese government claims of commitment to gender equality, particularly as China prepares to co-host the 2015 Global Women’s Summit at the United Nations, and the world marks the 20th anniversary of the Fourth World Conference on Women in Beijing” Dr. Hong Fincher wrote to China Law & Policy.

But if you think detaining people for leafleting an issue we can all get behind is scary, here is the real frightening part: these five women – Wu Rongrong, Zheng Churan, Wei Tingting, Wang Man and Li Tingting – never actually committed a crime, even under Chinese law.  By detaining these women prior to March 8 – when they were going to distribute their stickers and pamphlets – the women never caused a public disturbance as required by Article 293 of China’s Criminal Law.  Pu Zhiqiang, Cao Shunli, Xu Zhiyong, all detained, arrested or jailed for “picking quarrels and provoking troubles,” were at least able to partake in their “public disturbance” before the authorities took them away.  These women did not.  At most, in their attempt to make this a nation-wide campaign, they amassed an online following, all eager to partake in the March 8 events. 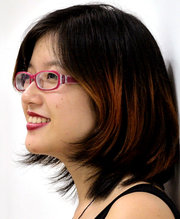 One of the detained, Zheng Churan, 25, and staff member of Yirenping based in Guangzhou

But, as Jeremy Daum at China Law Translate has noted, the Supreme People’s Court (SPC) and Supreme People’s Procuratorate’s (SPP) Joint Interpretation of Article 293 (July 2013) makes it clear that causing a disturbance by picking quarrels must happen in some kind of public venue – a bus station, a market, a train station, a park, or “other public venue.” In prosectuting an Article 293(4) case, the courts are required to analyze the totality of the circumstances, including the type of public venue, the number of people attending the event, etc.  (See Article 5 of the Joint Interpretation of Article 293).

Further, as Daum has highlighted, even the SPC’s and SPP’s controversial Joint Interpretation on Internet Speech Crimes (Sept. 2013), which does interpret Article 293(4) of the Criminal Law, would only apply in situations where the individual has spread rumors on the internet or other online network.  The only public prosecution under Article 293(4) involving the internet – the case of blogger Qin Houhou – is precisely this situation.  In addition to being charged with violating Artcile 293(4) – the picking quarrels provision – Qin was also charged and convicted of criminal slander.

Another detained activist, Li Tingting, 25 and Beijing-based manager of the LGBT program at the Beijing Yirenping Center

By criminally detaining these women, the Chinese police have stepped up this game, making a formal arrest and prosecution more likely.  While prosecution under Article 293(4) usually has a maximum prison sentence of five years, that sentence can be extended to 10 years where the defendant organizes others to commit the disturbance multiple times.  Given that these women likely were the organizers of the event, a 10 year prison term is a possibility.  Even though the current charge is groundless under Chinese law.

On Friday, the U.S.’s Ambassador to the United Nations, Samantha Power, tweeted her disgust with the Chinese government’s detention of Wu Rongrong, Zheng Churan, Wei Tingting, Wang Man and Li Tingting.  But the United States, and the rest of the world, must maintain this rhetoric. 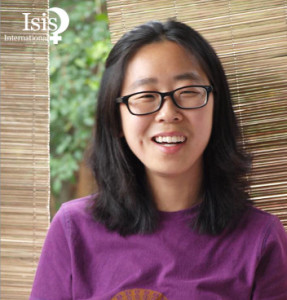 Twenty years ago, in Beijing China, Hillary Clinton ignored Chinese pressure to soften her remarks at United Nation’s Fourth World Conference on Women.  Instead, she rocked the world by forcefully stating that ” human rights are women’s rights, and women’s rights are human rights, once and for all.”  It’s time that Secretary Clinton, a potential presidential candidate, renew that sentiment and call for the release of these women – innocent even under Chinese law.