On Thursday, immediately following President Barack Obama’s meeting with the Dalai Lama, the White House issued the below press release and photo: 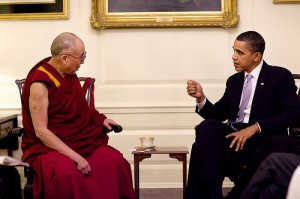 “The President met this morning at the White House with His Holiness the XIV Dalai Lama.  The President stated his strong support for the preservation of Tibet’s unique religious, cultural and linguistic identity and the protection of human rights for Tibetans in the People’s Republic of China. The President commended the Dalai Lama’s “Middle Way” approach, his commitment to nonviolence and his pursuit of dialogue with the Chinese government.  The President stressed that he has consistently encouraged both sides to engage in direct dialogue to resolve differences and was pleased to hear about the recent resumption of talks.  The President and the Dalai Lama agreed on the importance of a positive and cooperative relationship between the United States and China.”

Meanwhile, in China, the state-run news agency Xinhua, issued what appears to be a fairly tepid response given the Chinese government’s prior saber rattling:

Foreign Ministry spokesman Ma Zhaoxu said in a statement it was regardless of China’s repeated solemn representations for the U.S. to obstinately arrange the meeting between Obama and the Dalai Lama.

“The U.S. act grossly violated the norms governing the international relations, and ran counter to the principles set forth in the three China-U.S. joint communiques and the China-U.S. joint statement,” he said.