Just For Fun – China IS in the World Cup. Really!

Like every other country outside of the United States, China is a soccer-crazed nation and with the 2010 World Cup, employers fear a loss of productivity of their workers.  With China six hours ahead of South Africa, the matches begin at 7 pm local time, with the last match starting at 2:30 AM., giving most Chinese the opportunity to watch the matches with their friends into the wee hours of the morning.  And it appears that many are taking advantage of this time difference even without a hometown team to root for.

Given China’s dominance in recent Olympics as well as its people’s love for soccer, it’s weird not to see a Chinese team at the World Cup.  Especially since even its neighbor – poor and ideologically-suffocating North Korea – made the cut.  China was able to build up its curling prowess to win a bronze in women’s curling in Vancouver – a sport most Chinese, actually most people outside of Canada, have never heard of.  Surely it can train a World Cup-worthy soccer team.  So what gives? 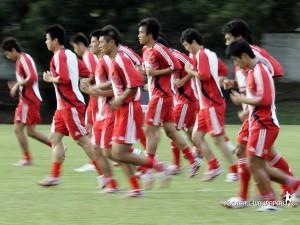 China - Economic superpower but not a soccer one

A recent article in the L.A. Times essential blames China’s “socialism with Chinese characteristics.”  While China’s state-controlled capitalism – where the state programs and controls much of the “free market” – has allowed for success in the economic sphere, it’s destroyed any hopes for soccer dominance.  China’s various professional soccer leagues are managed by the Chinese Football Association, a commercial entity that is overseen by the General Administration of Sport, a government body.  With dueling ideologies, the result is confusion and lack of coordination.  Additionally, China’s professional leagues have been plagued by high-level corruption, gambling scandals, and match-fixing, rotting the sport to its core.  While a recent clean-up of the corruption might have short-term impact, without better checks and balances, expect corruption to return to Chinese soccer and stymie any hope of creating a World Cup-worthy team. 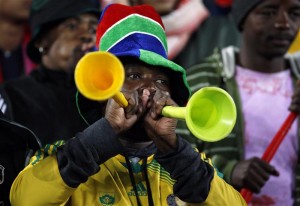 Vuvuzela - Made in China

Although there is no China presence on the field, there is plenty of China presence in the stands.  Those annoyingly loud vuvuzelas that drown out referee whistles and any sounds from the field are mostly made in China.  And China’s wig production saw a huge uptick in demand for wigs dyed the national colors of various nations.

But what has received the most attention is ESPN’s Martin Tyler’s on-air comment that the North Korean fans are in fact paid Chinese actors, an allegation that was also made last month in the U.K.’s Daily Telegraph.  As a team playing in the World Cup, North Korea is given a large number of tickets to give or sell to its people.  But for most North Koreans, a flight to South Africa would cost too much, leaving many of the North Korean-designated seats empty.  But supposedly, these tickets have been transferred to China, who is sending 1,000 actors to cheer on its neighbor.

Both China and North Korea remain mum in regards to the nature of the North Korean fans and have neither denied nor confirmed the rumors.  But China has hired “professional” fans in the past.  Most notably the 2008 Beijing Olympics.  In order to fill empty seats, the Chinese government sent groups of enthusiastic Chinese volunteers, wearing yellow shirts and armed with thundersticks, into the stands to cheer for both teams playing.  That’s right – the Chinese sent volunteers to cheer not just for their own team, but for whichever teams were playing.  Essentially, the Chinese Olympic officials wanted to guarantee an enthusiastic crowd for the teams playing.

During the 2008 Olympics and now for the North Korea matches in the World Cup, the Chinese received criticism for 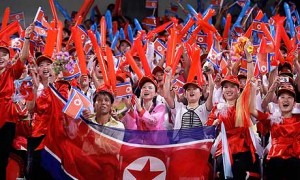 Fans cheer on North Korea at the 2010 World Cup

this “manufactured” support.  But I sort of think this type of magnanimity is cute and I kind of like it.  Imagine if you are the beach volleyball team from Luxemburg – you don’t even have beaches in your country let alone fans of beach volleyball that are going to watch you at the Olympics.  So how inspiring must it be to play in the Olympics and have a cheering section.  Sure it might be manufactured, but sometimes it’s just the cheers that matter for the team.  And for the other people in the stands, having a section that starts to get into the match, makes watching an otherwise boring event fun.  People don’t do the wave during the ninth inning of a tied Yankees-Red Sox game.  No.  They do the wave when they are bored, when the defeat is so obvious that you need a little entertainment to keep you involved.

So Monday morning, when North Korea takes on Portugal, I hope the fans – be Chinese or North Korean – are there wildly rooting for the North Korean team.  China should look to market this thing – a cheering section for hire and an enthusiastic one to boot?  There are a lot of politicians and disgraced corporate executives in the U.S. right now that might be interested.