Just For Fun – The Getty Center’s Cave Temples of Dunhuang 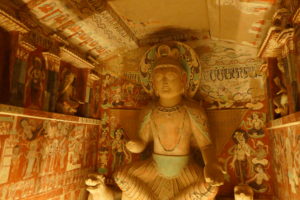 One of the cave replicas at the Getty’s Dunhuang exhibit

For close to 1,000 years, Dunhuang, an oasis town in western China, served as the crossroads of the world, with art that reflected its cosmopolitan nature.  Much of that art is found in the Mogao Caves located just outside of the town and reflect the development of Buddhist art in China from 400 AD to approximately 1400 AD.  Fast-forward to today and Dunhuang is a virtual unknown to most Americans.  Its hypnotic cave art completely forgotten by the world at large.

But starting this Saturday, the Getty Center will change this status quo, bringing the jewels of Dunhuang to North America in a magical exhibit that is not to be missed.  Cave Temples of Dunhuang: Buddhist Art on China’s Silk Road contemplates the Getty’s 25-year history conserving this amazing art and supporting the Dunhuang Academy, a Chinese-based organization created in 1944 to preserve the Buddhist cave art of Dunhuang. 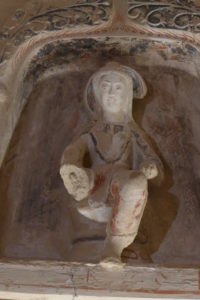 A westernized figurine in one of the earlier caves

Cave Temples of Dunhuang is broken down into three parts.  The first portion is a perfect replica of three caves – Cave 275, Cave 285 and Cave 320.  Surrounded by imposing Buddhist statues and with walls covered with Buddhist art, together these caves show the development and siniciziation of Buddhist art.  In Cave 275, western artistic influence is apparent, with one statute displaying clear Western features.  Cave 285 includes Hindu deities as part of the Buddha’s court.  But by Cave 320, the art is clearly Chinese.  It is also the height of Chinese art.

After visiting the caves, you are escorted to the second part and it is likely this part that will serve as the biggest draw.  It is probably the reason why the Getty is extending its weekend hours.  Instead of physically replicating the caves, the Getty commissioned yU+co to create a 3-D, immersion copy of one of the Mogao Caves.  After donning 3-D glasses, you are escorted to a dark room and soon, you are flying around Cave 45, stopping periodically on a statute or painting on the ceiling, with the narrator explaining the religious significance of each piece.  It is a fun way to see this art and an amazing experience.  It is also likely the way of the future for museums shows.  Or at least those that can afford it.

But it is the third part – the most traditional – that truly showcases the gems of this exhibit.  After 1400, the Mogao Caves were largely closed, forgotten and covered by sand.  But in the early 1900s, western explorers re-discovered this area.  With China in the throes of dynastic decline and revolution, these explores absconded with some of the best art – paintings on silk, ancient manuscripts, instructions on how to paint the caves – all of which had been perfectly preserved in a sealed up cave known as the Library Cave.  These masterpieces largely sit in storerooms of British and French museums.  The British Museum, which has the most artifacts from the Library Cave, has none of these pieces on permanent display.  The French museums also rarely show their Dunhuang pieces.  While these museums argue that exposure to the light would destroy these delicate artifacts, one wonders if, in 2016, that is still the real reason why only a select few are permitted to see these amazing pieces of art and important relics of world history. 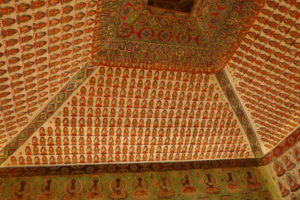 How did all those tiny Buddhas get to the ceiling? The Getty explains

Fortunately, the Getty was able to borrow many of the treasures of the Library Cave and has displayed these for visitors to see.  The Diamond Sutra, the world’s oldest printed book, is on display, as are writings reflecting the various religions practiced in Dunhuang – Hebrew scripture, a Christian psalm translated into Chinese.  But the paintings on silk are truly mesmerizing, with bold colors and patterns that hold your attention.  One painting on silk seems more like an art deco piece of the 1920s than a piece from 700 AD, making one realize that some conceptions of beauty never go out of style.  Once the Getty closes this show and returns the art, these are pieces that will likely never see the light of day again which is truly a travesty.  This alone is a reason to see this show.  But the final part of Cave Temples of Dunhuang ends with an explanation of how these caves were built, the lives of the artisans and how exactly they did all of this, allowing the visitor to better understand the people who commissioned 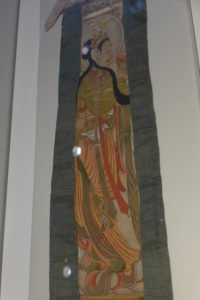 and built these caves.

Through Cave Temples of Dunhuang: Buddhist Art on China’s Silk Road, and the care that went into creating such a breathtaking show, the Getty Center’s dedication to preserving this important world cultural site and sharing its beauty is clear. And unlike its British and French museum counterparts, the Getty understands that this important art must been seen by the world at large.  Cave Temples of Dunhuang also does a wonderful job of explaining the religious and historical significance of the art and perfectly captures why Dunhuang is still an important site.  If you are in Los Angeles this summer, be sure to put this at the top of your list.  You won’t regret it.

Cave Temples of Dunhuang: Buddhist Art on China’s Silk Road
May 7, 2016 – September 4, 2016
The Getty Center
1200 Getty Center Drive
Los Angles, CA 90049
***During the Exhibit, the Getty will stay open late on Fridays, Saturdays and Sundays***
Note that tickets for the physical and immersion caves are timed but the exhibit of artifacts can be seen at any time.