Tomorrow marks the 74th anniversary of the 228 (two-two-eight) Incident.  Never heard of it?  I hadn’t either until a couple of years ago. But the 228 Incident marks the start of a violent, dark period of Taiwan history: the White Terror.  Starting on February 28, 1947 and for the next 40 years, Taiwan’s ruling Nationalists Party (“KMT” or “Guo Min Dang”) instituted martial law, subjecting any dissenters – or those who the government believed to be dissenters – to arbitrary imprisonment, torture, and death. At times, the White Terror even made its way to U.S. shores, such as assassinations sponsored by the KMT.

The world knows little of the White Terror because of the KMT’s effective suppression of the topic even after martial law was lifted in 1987. And also because of Taiwan’s friendship with the U.S., which didn’t ask the questions it should have even when U.S residents and citizens were subject to the White Terror, let alone ordinary Taiwanese.  Then, came the mid-1990s, when Chinese studies in the U.S. began to focus on the mainland, with Taiwanese history an afterthought, if even that.

Now though Taiwan is on the rise.  With its successful containment of COVID-19 and its strong embrace of democracy, the world is watching Taiwan.  And another example that Taiwan can offer to the world is how a country deals with the mass violence and murders of its own people. In 2018, the Taiwanese government instituted the Transnational Justice Commission to investigate and address the atrocities committed during the White Terror.

To even contemplate if the Transnational Justice Commission will be successful, knowledge of the violence and pervasiveness of Taiwan’s White Terror is a must. Shawana Yang Ryan’s Green Island, a historical novel that tells the story of a Taiwanese family trying to survive the White Terror, provides that understanding.

Green Island starts on the eve of the 228 Incident, with the birth of its narrator who remains nameless throughout the entire novel. Her father, a doctor, delivers her, but the next day he is violently hauled off by the police, all because of a brief moment when he spoke, in public, about his desire for a freer Taiwan. He returns to the family 10 years later, unrecognizable after a decade of on Green Island, the island where the KMT set up its diabolical prisons for political dissidents.  Ryan briefly details the father’s torture, covering only the time period soon after his detention; Ryan does not go into the gory details of his decade-long prison sentences.  But what Ryan shares is enough to know that the father will emerge – if he emerges at all – a very broken man. And by telling the story through the daughter, we see the intergenerational damage of the White Terror: a distant, destroyed father, who will never be able to hold a job again nor the respect of his family; the constant surveillance by the authorities; the crushing of civil society; family and friends forced to turn on each other to save another or sometimes just themselves; the retribution experienced by family members in Taiwan when an emigrated child exercises her freedom of speech in America.

Green Island is not an uplifting novel, nor can it be given the truth it seeks to expose about the KMT’s martial law.  Even the narrator is a complex character, where at points you are rooting for her but then at others are appalled by her choices. Although on some level, you wonder – would I have made the same choice if put in such a horrific situation, and are thankful that your government never has asked you to. With Ryan’s artful prose and development of characters over a 60-year time period, Green Island is a necessary read to learn about the White Terror and to understand the trauma that Taiwan still grapples with even as it establishes itself as a vibrant democracy.

Interested in purchasing the book? Considering supporting you local, independent bookstore. Find the nearest one here. 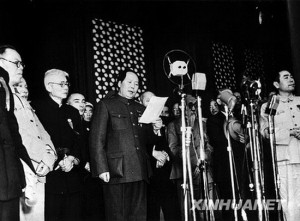 Chairman Mao Zedong proclaims the founding of the PRC, Oct. 1, 1949

October 1 marks the 60th anniversary of the People’s Republic of China and to all our friends in China, China Law & Policy wishes you a happy birthday!

China’s history spans over 2,000 years, but the existence of China as a communist country has only been for the past 60.  Up until 1911, China was ruled by various different Chinese dynasties.  The last imperial dynasty, the Qing, ruled China from 1644 until its overthrow in 1911 (The Last Empror tells the story of the final days of the Qing).  While the Kuomintang (pronounced Gwo-Min-Dang and also known in English as the Nationalist Party) nominally ruled China, control really rested with the various Chinese warlords.  It was not until 1927 that Nationalist leader and Republic of China president, Chiang Kai-shek, was able to eliminate the warlords and truly unify a modern China.

However, while the Nationalists unified the country, the Chinese Communist Party (CCP), which was founded in 1921 as 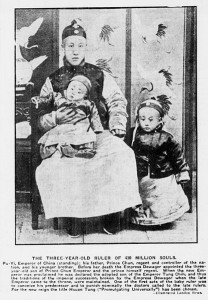 an urban intellectual movement, was quickly becoming a revolution in the countryside under the leadership of Mao Zedong.  Soon, the Nationalists had to contended with the growing forces and guerilla tactics of the CCP, beginning the Chinese Civil War.  However, both sides came to a truce in order to fight the Japanese invasion and World War II (1937-1945).

At the conclusion of the War, the Nationalists and the CCP resumed their civil war.  By 1949, CCP victory was all but certain and the Nationalist forces began to flee to Taiwan.

Sixty years ago, On October 1, 1949, Mao Zedong stood on the gate of Tiananmen in Beijing and declared the People’s Republic of China.

60th Aniiversary festivities have already started in Beijing and will continue throughout the day Thursday.  Pictures have yet to be released from the celebrations (it started 10 AM Beijing time), but Reuters has a great live blog going.  According to Reuters, President Hu Jintao has dusted off his Mao suit and is going retro!  Only question remains – is it a blue, green or a black Mao suit? Inquiring minds want to know.