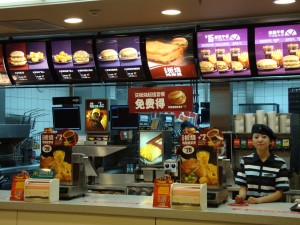 More than a McDonald's for China's public interest lawyers

Beijing, China – You would never expect a group of professional attorneys to hold a serious meeting in a McDonald’s, but for Chinese public interest lawyers, it is one of the few remaining safe places to meet.  With constant surveillance and random harassment by Chinese police, a public place like McDonald’s decreases the very real risk that the police will arbitrarily drag these public interest lawyers, known in Chinese as weiquan lawyers (pronounced way choo-ann and translated as “rights defending” lawyers), into custody.  So that is where I found myself last Friday when I met with three public interest attorneys in Beijing, all recently disbarred, to discuss their expectations for President Barack Obama’s inaugural visit to China next week.

“The government took away our ability to work…to help the people achieve their rights” Beijing lawyer surnamed Xie* (pronounced Syeah) said as he explained the recent disbarment of over 20 weiquan lawyers from practicing law in China.  While acknowledging that the Chinese Ministry of Justice (MOJ), which controls all bar associations in China, has the right to initiate procedures to discipline poorly-behaved attorneys, Xie countered “here, they didn’t even follow their own procedures….Because we did nothing wrong, they [the government] couldn’t use the procedures…instead, they used pressure on our law firms and other secretive means to punish us weiquan lawyers.  This is becoming more common.”

To say that public interest law in China is a small, burgeoning field is an understatement.  Only a handful of lawyers take on the cases of the most weak and vulnerable of Chinese society, and in a country of close to 1.4 billion people, there are a lot of these cases.  These are the cases on behalf of parents who lost their only child in the Sichuan earthquake and who want justice from the local government for shoddy school construction; or cases that seek to protect the rights of

members of Falun Gong to practice their religion, a right guaranteed under the Chinese Constitution; and cases as simple as protecting individuals infected with HIV or AIDS from discrimination.  While these lawsuits can all legally be brought under Chinese law, politically they are dangerous.  And the weiquan lawyers who bring these cases, cases that the Chinese government sees as upsetting their narrative of a “harmonious society,” subject themselves to harassment, disbarment, and, in the case of Hu Jia (pronounced Who Gee-ah), prison time.

These weiquan lawyers want President Obama, a fellow public interest attorney and Noble Peace Prize recipient, to acknowledge the importance of their struggle when he comes to Beijing.  “I don’t have great hope [for the visit]” attorney Liu* (pronounced Leo) admitted “but it is important for him [President Obama] to say something.”

“When Clinton and Pelosi came to China, they spoke little of human rights” Beijing lawyer Tang*, who was detained by police for a few days this past June, noted.  “But I want Obama to speak more about these issues.”

“President Obama and the U.S. government shouldn’t just look at today’s China, but where China will be in the future” Xie said “they need to look at the Chinese people’s hopes and their changing state of mind.”

President Obama and many who are traveling with him to China, including Secretary of State Hillary Clinton, know all too well the importance of public interest lawyers in guaranteeing that the laws on the books are a reality for society’s most vulnerable.  Upon law school graduation President Obama returned to Chicago to help the poor and least represented achieve their legally-entitled rights.  As first lady of Arkansas, Secretary Clinton co-founded the Arkansas Advocates for Children & Families and was the chair of the Legal Services Corporation.

Because of this and because they are colleagues of these weiquan lawyers, during next week’s visit, President Obama or Secretary Clinton needs to publicly acknowledge the increasingly difficult challenges faced by China’s weiquan lawyers and stress the benefits a flourishing public interest law movement can bring to China.

The importance of U.S. opinion to these weiquan lawyers cannot be overstated.  “America still serves as a model for human rights….it’s their duty to say something” Tang implored.  Like many Americans, I have often read about the beacon of hope that the U.S. provides to rights activists abroad.  But it wasn’t until last Friday, in talking to people ostracized by their own government for doing what they believe in, that I began to understand the significance of U.S. moral authority and the tangible dependence of activists abroad on it.

The U.S. is currently experiencing a great deal of self-doubt – our economy is tattered, we are in the midst of what appears to be two never-ending wars, our political parties can’t seem to cooperate to get anything done, and to get out of some of these problems we appear dependent on China.  But Tang is right – we should not shrink from the responsibilities of our ideals.  If President Obama, who likely best understands the importance of rhetoric in defining a movement, does not say something on behalf of these weiquan lawyers, then who will?

* The lawyers requested that only their last names be used in order to protect their identities.