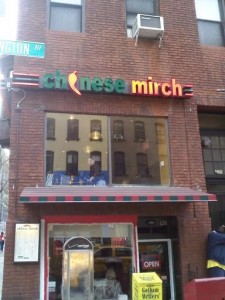 Religion successfully moves from country to country by adopting many of the customs and culture of its new host country.  Similarly, so does Chinese food.  The food you find at a local take-out in Manhattan is different than what you would find on the streets of Beijing.  While some sinophiles might turn up their nose to American Chinese food, it is its own distinct cuisine, to be loved and respected for its own separate reasons.  And love it I do.

But the Chinese have gone all over the world.  So what is Chinese food like outside of the U.S.?  Is there sweet-and-sour pork?  General Tsao’s?  Such thoughts blow my mind, sort of like wondering, what is out there after the planet Pluto?

So imagine my excitement last weekend when a friend (and avid China Law & Policy reader!) invited me to join her at an Indian Chinese restaurant.  And that’s how I ended up at Chinese Mirch on Lexington Avenue and 28th Street.

Chinese food is not new to India and in fact likely has a longer history there than in the United States.  With the Chinese first settling in Calcutta in the late 18th century, Chinese food in India has had the time to fuse some of the best of both Asian countries.  A mix described as “an explosion of flavor, sometimes bold and fiery, but always a delight to the senses,”  Chinese Mirch certainly delivered on the bold and fiery, but at times left me without the delight.

For me, we might have started off wrong.  Chinese Mirch’s appetizer of chicken spiked with curry leaves and red hot

chilies, named Mirch 65, was intense and not in a good way; more in a “can I have a bigger glass of  water” way.  I don’t consider myself weak when it comes to spicy, but Mirch 65 had way too much chili, overpowering what otherwise might have been a good dish with fresh, succulent pieces of chicken.  Our dish of fried okra though was pretty solid.  Nice fresh pieces of okra with a light fried batter and good and crispy.  But while it was good, it wasn’t spectacular.

But things decidedly picked up with the main dishes.  Vegetable ball Manchurian is a must.  While shaped as little meatballs, it does not attempt to replicate the taste or feel of meat.  It knows better than that and does not need to stoop to that level.  No, vegetable Manchurian rightfully stands alone.  Made of fresh ground vegetables in a minced onion, garlic and cilantro sauce, and lightly fried, the flavors of the fresh vegetables clearly speak for themselves and trust me, what they have to say shouldn’t be missed. 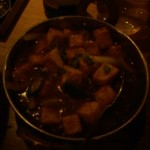 The chili paneer, lightly fried cubes of cheese in a hot soy chili gravy, was close to divine.  Outside of a few places in China, cheese does not exist and is not found in traditional Chinese cooking.  So the paneer is much more of an Indian dish than a Chinese one, but the soy sauce and chili gravy allowed the flavor of the paneer to pop.  Likely to the displeasure of my dining companions, I couldn’t stop eating it.  By time I knew it, the whole dish was gone.

After two marvelous dishes, the crispy Szechuan lamb was a bit disappointing.  There wasn’t really anything exciting about it.  It consisted of good pieces of meat, not at all chewy, with good lamb flavor and a nice chili spice aftertaste.  But it wasn’t anything to write home about.

Fortunately we finished our meal on a bang with the Hakka noodles.  The Hakka are a group of Chinese who speak the 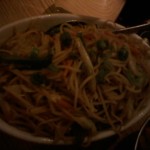 Hakka dialect and during the late 18th and 19th centuries, traveled and settled in many places outside of China, including India.  While few Hakkas can still be found in China today, remnants of their distinct food can easily be found in Chinatowns that dot the globe.  Hence, Hakka noodles from India.  Hakka noodles are so common and popular in India that most young Indians today don’t realize that the dish is not original to India, at least according to one of my dining companions.  If lo mein is too greasy for you, hakka noodles are a wonderful alternative.  Thinner, flatter and less greasy, Hakka noodles do not leave you feeling overly full and gross like lo mein can.

Overall, Chinese Mirch was a good find and I look forward to exploring more of the flavors of Inidan Chinese food.  The food has all the savoriness of traditional Indian food but with lighter sauces and flavors.  It also makes significantly more use of the chili which in some cases (like the Mirch 65) can be a bit much but in other cases, really makes the dish.  Prices though are reasonable with most dishes around $10.  Do note that Chinese Mirch is a rather small restaurant and given the increasing demand for Indian Chinese food, the wait can be long.  If you would like to try to make some Indian Chinese food on your own, you can find a great recipe here.