Follow Up on the Wukan Protests – A Constitutional Challenge? 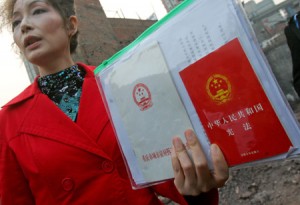 It's a Constitution We are Propounding!

In the beginning of January, we posted a piece on the recent protests in Wukan, admitting that while there was something happening in Wukan, we at China Law & Policy where unclear what it was.  Enter Prof. Keith Hand of UC Hastings School of Law, a specialist in Chinese constitutional law, who on Friday published a fascinating piece in the China Brief interpreting Wukan as a manifestation of the villagers’ constitutional discontent.

Hand’s piece teaches the lesson that, in analyzing legal developments in China,  we are often prisoners of our own legal systems.  Case in point is constitutional law.  China is often criticized by foreign scholars about not having constitutional law; yes there is a law on paper, but the courts are prevented from hearing any constitutional claims and for American legal scholars used to constitutional jurisprudence being propounded by the courts, this is almost anathema. 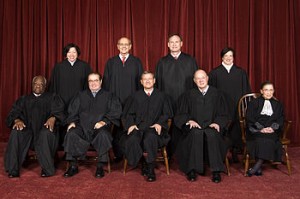 Why do these guys get to have all the constitutional fun?

This grassroots, constitutional interpretation is not absent from America.  In fact, as Hand mentions, some American constitutional scholars view many popular protest movements as an important part of moving society – and in the U.S., the courts – forward to a different view of the constitution and have called this “popular constitutionalism.”  Could the Supreme Court handed down all of its decisions of the 1960s without the Civil Rights Movement and the Women’s Rights Movements?

Will constitutional claims ever be heard in a Chinese court?  Who knows, but as Hand makes clears, constitutional jurisprudence i happening in China, just not where most Americans might look to find it.

For a deeper understanding of popular constitutionalism in China, read the Hand’s short piece here.