Just for Fun: Tips for Travelers – Avoiding Stress in Beijing 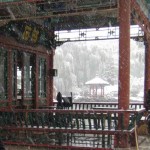 Visiting Beijing anytime soon?  Or merely just thinking about it?  As anyone can tell you who has ever been, in a city of  close to 20 million people on a land mass roughly the size of New York City, it is a stressful place.  So it is important to know how to remain calm and relaxed in a city that is anything but.  Susan Fishman Orlins, one of the first Americans to live in Beijing after the U.S. normalized relations in 1979, and a notorieous worrywart, offers her suggestions on how to avoid the stress of Beijing and live the imperial lifestyle while there.  Didn’t Puyi ride a bike too?

What worries me most in Beijing is the air quality. When I view this smoggy city-as though through gauze or an organdy curtain soiled with age-I’m pleased with my choice to get around on a two-wheeler rather than sit in traffic jams, contributing to the pollution. You can rent a bike at any of several subway stations and drop it off at any other subway rental area. Be aware that, traffic-wise, the bigger you are, the more you have right of way. At intersections, cars turn from all four directions, seemingly at once, without slowing down. As for a helmet, don’t leave home without one!…Read More of Susan’s Travel Tips Here.

More of Susan’s worries, and writings on China, can be found at her blog –  Confessions of a Worrywart: Meditations on All that Could Go Wrong.  After reading one or two posts,  you will find yourself happily worrying too.