In October, the Guggenheim’s show, Art & China After 1989: Theater of the World, opened to a flurry of criticism, with the museum capitulating to animal rights activists and online protesters by pulling three pieces that involved – and in some cases abused – animals.  But after seeing the show this past weekend, one has to wonder precisely when the Guggenheim first started on its path of censorship in creating Art & China as self-censorship appears to permeate the first half of the show.

Art & China covers what was perhaps China’s most innovative artistic time period – the two decades covering 1989 through 2008.  With 1989 being the start, one would assume that the focal event would be the students protests at Tiananmen Square in spring 1989.  Much of the art included in the first half of Art & China, with its darkness and dystopian feel, is a result of those protests.   But Art & China makes little mention of the Tiananmen massacre, an event that caused artist and the art movement in China to radically change; many of the artists featured in the Guggenheim’s retrospective left the country as a result.  But instead, the Guggenheim merely equates 1989 with the end of the Cold War.  That might be true for the West, but for China, the Tiananmen protests and massacre was likely a more influential event.  But Tiananmen – a seminal moment for many of the artists featured –  is shortchanged.  In fact, it is whitewashed.  One slide shockingly describes the Tiananmen massacre as a simple clearing of the Square:

Back in Beijing, in the early morning of June 4, soldiers cleared demonstrators from Tiananmen Square, marking the end of a democracy movement to which advanced art had been closely allied.  In the months that followed, the publications and institutions that had catalyzed artist discussion throughout the 1980s were reined in or shuttered. . . .

There is no mention of the fact that the Chinese government ordered the massacre of hundreds to possibly thousands of unarmed civilians the night of June 3 into the early morning of June 4, 1989 on the streets surrounding the Square.  Even the pieces that directly address the Tiananmen massacre, choose not to explain it. Wang Xingwei’s painting of a cyclist ferrying two bleeding penguins does not mention that the painting is a reference to a tragic photo from that night where the penguins were dying people.  It does not even  show the original photo.  Similarly, Zheng Guogo’s sculpture of a line of deep fried toy tanks makes no mention of the iconic photo of Tank Man – a Chinese man stopping a line of tanks after so many civilians were killed by those same tanks only hours earlier.  Again, the original photo is absent.  And as Jane Perlez points out in her New York Times piece, even for those artists featured, the Guggenheim chose not to include more powerful and artistic pieces likely because they more honestly and precisely addressed what happened on June 4, 1989 and would arouse the ire of the current Chinese government.  There is one piece at the end of the exhibit- Yang Jiechang’s Lifelines I – where the wall plate goes into a little more detail, acknowledging that this piece reflects the zigzag paths that volunteers carried injured protesters to hospitals and to safety. 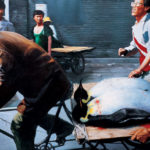 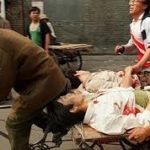 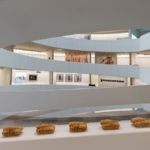 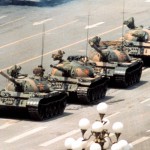 But the Guggenheim should not assume that the people visiting the show will already know the history.  This past weekend, much of the crowd appeared to be average tourists, not necessarily people who are China watchers. With many looking like they were below the age of 40 who likely didn’t personally experience the events of 1989.  Without putting these early works from 1989 and the early 1990s into the proper historical perspective, these visitors lose the true meaning of not just the works, but what these artists were doing with their movement. 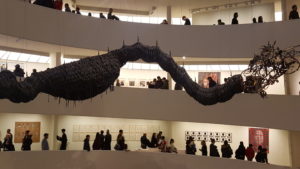 The Guggenheim does a bit of a better job explaining the next major event that impacted these artists – the rapid economic development that took China from a poor country to the second largest economy in the world.  But again, the description of these events presupposes a knowledge of China.  The enormity of this transformation – in a night, entire neighborhoods were razed, with new buildings being built a week later; in the spans of 10 years, China’s urban population would grow from 26% to 50% of the total population – is not fully developed.  But that massive societal shift is never put in any type of measurable perspective which makes it difficult to truly understand what these artists were responding to.

Finally, Art & China only features avant-garde, conceptual art from 1989 through 2008.  Most of China’s famous artists from 1989 to 2008 who practiced in more staid mediums like oils or watercolors are not featured.  But many of the conceptual pieces that the Guggenheim chose to feature were some of the most important from the time period and heavily influenced not just artists in China but also abroad. 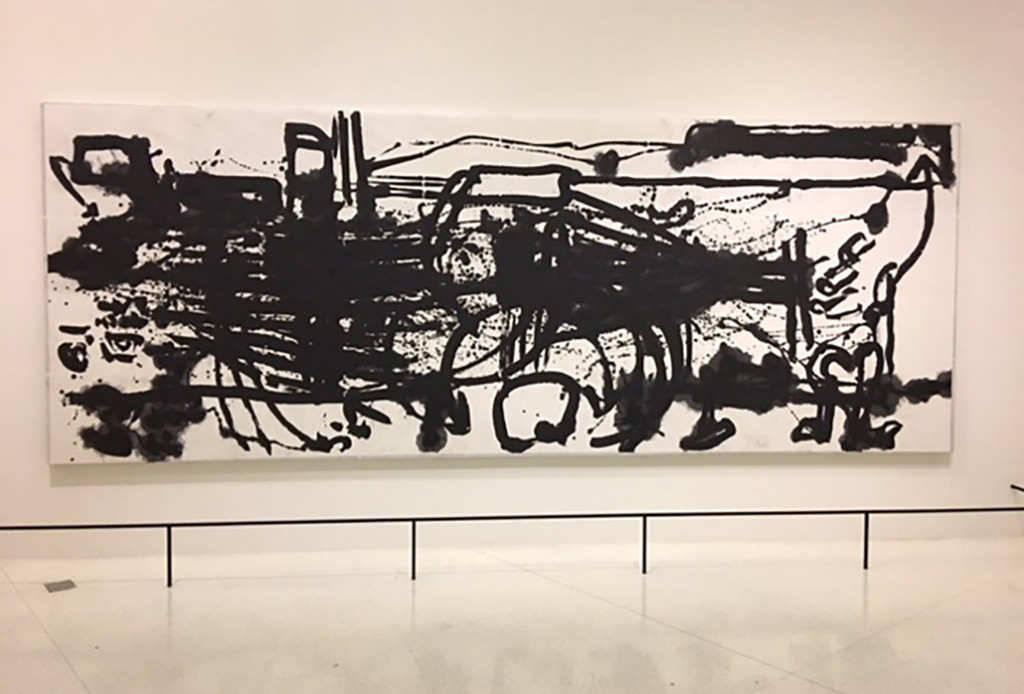 Yang Jiechang’s Lifelines I, one of the few pieces where there is a little more description about the Tiananmen massacre.

Art & China is in its final week, closing on Sunday, January 7. But given the whitewashing of the Tiananmen Square protests and massacre, an average visitor likely will not fully comprehend the depth of what these artists were doing in the early 1990s.  It is true that many Western observers seek to view Chinese art through a political perspective and that has, rightfully so, frustrated many of China’s newest artists. But for the artists of the early 1990s, their art was a reaction to the Tiananmen massacre.  So it is essential to explain their work through that lens.  That fact that the Guggenheim chose not to raises the question as to why.  What audience were the curators seeking to serve with their show?  Certainly not the visitors, who are left with looking at political art and understanding a movement without any perspective; and certainly not the artists from the early 1990s whose work was completely altered by Tiananmen.  It is unfortunate that the Guggenheim – in a show that starts with 1989 – chose not to fully explain or address Tiananmen.  it does a disservice to the featured Chinese artists and their impressive work.