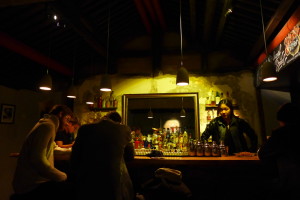 For most foreigners in China, baijiu (pronounced bye gee-oh) is a joke, or at the very least, the key element in any story about passing out, blacking out or vomiting up your banquet dinner.  But for the Chinese, baijiu, a strong, traditional grain or rice wine, is a must at any celebratory outing.  While foreigners often turn up their noses at baijiu, the Chinese really seem to enjoy it.  And have so for around 2,000 years.

Bartender David gives an introduction to a flight of baijiu

the gap between foreigners’ misunderstanding of baijiu and the Chinese love of it.  Showcasing some of China’s finest and smoothest baijius, Capital Spirits gives the uninitiated a reason to respect – if not begin to love – baijiu.  The bar offers a number of baijiu flights, where for 40 kuai (around $8), you can taste and compare four or five different baijius from around the country.  Each drink in the flight is introduced to you by the bartender, highlighting the differences and history of each brand.

But for those who cannot yet face pure baijiu, Capital Spirits also offers an eclectic and inventive baijiu cocktail mix.  That is the menu my friends and I ordered off of when we were there one recent night.  The cocktails were familiar – the hutong hound, a mix between grapefruit juice and baijiu was similar to a greyhound; the pineapple express had elements of pineapple and Malibu; and the ma-la rita, like a margarita.  But the taste of baijiu was evident if not in the strength of the cocktail alone.  While each was refreshing and tasty, especially the ma-la rita which had an enjoyable Sichuan peppercorn kick to it, because of the baijiu, these were sipping cocktails, not downing ones.  If you do want to down drinks in a more traditional manner, Capital Spirits has a full bar (two men were drinking whiskey when we showed up) and a non-baijiu cocktail mix. 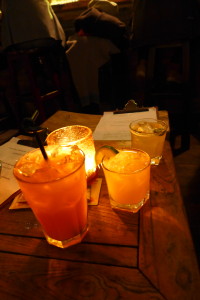 Capital Spirits’ goal is to convert the doubting to the gospel of baijiu, a task that it appears to be slowly winning.  But what it truly does best is create an intimate neighborhood vibe in this small hutong space.  This is a crowd willing to try new things, and as a result, willing to talk to strangers.  By the end of the night, we had bantered with many of the other customers.  David, the bartender that night, was also hospitable, explaining all the different drinks.  But if you want to be left undisturbed, that is an option too in this dimly-lit space.

I am probably not going to become one of the converted.  Baijiu is still a mean spirit, especially for yours truly who thinks Mailbu and pineapple juice is a strong drink.  But I am going to go back to Capital Spirits.  It’s a great place to enjoy a drink – even a non-baijiu one – with a fun group of a people.

Note that the bar does not open until 8 PM.