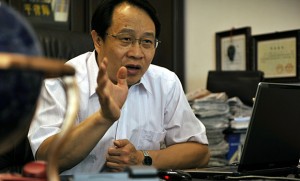 Last July, Caijing Magazine – an independent, hard-hitting financial news outlet in Beijing – convened its first ever conference on the status of lawyers in Chinese society.  Titled “China’s Lawyers at a Crossroads” (summary of the conference can be found here – in Chinese), the conference featured notable criminal defense and human rights lawyers and professors such as Professors Jiang Ping and Chen Guangzhong of the prestigious China University of Politics and Law.

Through a series of speeches (conference website here – in Chinese), the panelists seemed to agree that the road China’s lawyers have been forced to walk in recent years has been rough and full of pot holes.  Rights-defending lawyer (or in Chinese weiquan lawyer), Mo Shaoping, known more recently for representing Nobel Peace Prize winner Liu Xiaobo, provided a clear analysis of the regression of the legal profession these past few years.  Below is an English translation of his fascinating, if not depressing, speech.  The Chinese original can be found here.

Ultimately, Mo provides some hope for China’s lawyers – a far-off, distant hope, but hope none the less, echoing some of the sentiment found in Bob Dylan’s “Paths of Victory” (trails of trouble/roads of battle/paths of victory/we shall walk).  In all, his speech provides an interesting insight into how one of China’s most prominent lawyers views the development of the profession.

I think I will discuss the legal profession and the rule of law from a macro perspective.

First, what is the present situation concerning lawyers and the legal system?  I agree with both Prof. Jiang Ping’s and Ms. Jin Liping’s views: at present, there has been a regression for the legal profession and the rule of law.  And this is not an ordinary regression; the movement backwards has been very great.

You can see China’s current regression from a rule of law from several angles.

1.  Originally, the path and direction of judicial reform was for judicial independence.  Now, this isn’t mentioned; instead, “[The Doctrine of] the Three Supremes” is promoted.

2.  The original direction of reform was to bring professionalization and specialization to the judges, but now the emphasis is on the decades- old “Ma Xiwu” adjudication method of following the masses.

3.  Originally, there was emphasis on judicial neutrality and passivity: the judiciary should be passive and neutral.  Now, the emphasis is on the active initiative of the judiciary.  I myself consider this a step back; even though there are very intense and different opinions in this debate, I consider a more active judiciary a regression.

4.  Originally, there was the emphasis that lawyers associations would be self-regulating, autonomous organizations.  But now, the leaders of our Ministry of Justice want lawyers to “pay attention to politics, take into consideration the overall situation, and observe proper discipline;”there is no mention of the word “law,” there is no mention that lawyers should follow the Lawyers Law when providing service to clients.

Second, does the legal profession exist in an environment and system of rule of law?  I believe that the legal professional environment and system does not exist under a rule of law.  Even though we have emphasized rule of law for many, many years and have regarded a [creating] a rule of law country as the goal, I believe our current system and environment is not one that relies on rule of law, rather it relies on the law of the Party [the Chinese Communist Party].  From the selection and appointment of [Party] cadres, we are under the Department’s control.  Our armed forces are under the absolute leadership of the Military Commission of the Party and thus absolutely obeys Party leadership; our ideology is under the increasingly strict control of the Propaganda Department, including the judiciary’s ideology.  The Political and Legal Affairs Committee of the Party is in charge of the People’s Courts; of course, it’s not only just the courts, it also includes the People’s Procuracy, the public security bureaus and the judicial administration bodies.  From a theoretical legal perspective, China itself does not follow a principle of judicial independence in organizing its judicial system.  From a reading on the 126 articles of the [Chinese] Constitution, it’s the People’s Courts that exercise judicial power; administrative bodies, societal groups, and individuals are not suppose to interfere with the courts’ judicial power.  But you cannot say that about Party interference and thus we have a Party-run political-legal justice system.  China’s 1954 Constitution is better than this current regulation.  The 1954 Constitution was clear and simple: only the independent courts administered the judicial power, and the courts only answered to the “law.” It was very clear, there was no mention of administrative bodies’ interference, or society groups of individuals.  So did Party organs have the right to interfere [under the 1954 Constitution]?  No.

Third, under this system and environment, is the legal profession one with true freedom of speech?  My answer is similarly “no.”  Right now, criminalizing speech can be found everywhere.  Prof. Jiang Ping has paid particular attention to the case of Liu Xiaobo.  From hundreds of articles with over two million words, I can pick six articles and over 674 words to maintain that you are inciting subversion of state power [the crime Liu Xiaobo was convicted of].  A few days ago, I ran into a Hunan professor.  He requested that the Supreme People’s Court conduct an investigation of the lawyer perjury provision of Article 306 of the Criminal Law;  [the request] was signed jointly by other lawyers.  Allegedly, the local justice ministry and local lawyers association disciplined him.  From the perspective of the Legislation Law, not even a lawyer, but rather any regular person can request that the National People’s Congress conduct an official examination of any law, but when a lawyer, who has a closer relationship with the law, asks the people’s court to conduct an investigation, he is punished.  Thus, our profession is not one with freedom of speech and expression.

Fourth, are our lawyers associations self-regulated and autonomous?  That’s also not the case.  Prof. Zhang just mentioned that we are not able to have confidence in our lawyer associations, these lawyer associations sometimes, I myself think do not protect lawyers’ legal rights.  Instead they work to help judicial administration bureaus punish lawyers.  Of course, from another perspective, a country that uses a branch of its government to control lawyers’, this is rarely viewed as a true democratic, rule of law country; very, very rarely seen as such.

Just raising in passing the problem of lawyer fees, I hold a very negative view of the regulation concerning attorney fees.  The regulation on attorney fees lacks an adequate basis in law and violates the Price Law.  The Price Law includes nothing more than three kinds of prices: government-set prices, government-guided prices, and market-set prices.  There isn’t sufficient basis in the law to say that attorney fees are government-set or government-guided, but at the same time, [China’s] regulations standardizing attorney fees runs counter to the rest of the world.  In many countries, there is a limit on the lowest amount that can be charged – this prevents vicious competition – but there is no limit on the maximum that can be charged.  In practice, this method is difficult to operate.  Moreover, this causes some excellent lawyers [to leave], for example, criminal defense lawyers abandon the criminal defense bar.

Fifth, what should China’s lawyers’ next step be?  To be honest, I also don’t know what the next steps should be.  Of course, I still firmly believe that [China] will inevitably move toward democracy, rule of law and constitutionalism; this is the tide of history.  To borrow a phrase from Dr. Sun Yat-sen: in the majestic tide of history, those who follow the current shall flourish, those who go contrary to it shall perish.  Although the road will be very tortuous and dangerous, China will eventually become a democratic, rule of law, constitutional government and no one can stop it.

5 Responses to “Translation: Speech by Mo Shaoping Discussing the Dangers for China’s Lawyers”