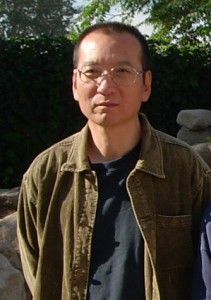 This morning, the Nobel Prize Committee announced the winner of its 2010 Nobel Peace Prize: Chinese human rights activist Liu Xiaobo (pronounced Leo See-ow Bwo).  But don’t expect Liu to be able to go to Norway to accept his prize; Liu is currently serving the first year of an 11-year prison term.

In all respects, Liu is perhaps the most famous of China’s human rights activists, at least internationally, and one of its longest serving.  Liu, an intellectual, literary critic, professor and writer, first emerged on the human rights scene in 1989 during the Tian’anmen student protests.  When the protests began in the Spring of 1989, Liu was at Columbia University in New York.  Immediately boarding a flight, Liu, a professor at Beijing Normal University, joined the students in hunger strikes on Tian’anmen Square.  But by June 3, sensing the danger of an impending crackdown, Liu encouraged the students to withdraw from the Square before the Chinese army was likely to violently suppress the student-led protests.  While many of the students did leave the Square, Liu’s pleas were for naught; on the streets surrounding the Square, an unknown number, likely reaching in the thousands, were killed.  After the suppression of the movement, Liu was tried for “counter-revolutionary propaganda and incitement” and convicted although ultimately exempted from criminal punishment.

During the 1990s, Liu’s commitment to greater human rights in China did not waiver.  In the long tradition of the Chinese dissident, Liu took up the pen and during the 1990s, wrote a series of essays criticizing the Chinese government and calling for greater democracy for the Chinese people.  With his essays receiving accolades from abroad and censure from those high up in the Chinese Communist Party (CCP), the Chinese government detained him and sent him to a labor camp through China’s “Re-education Through Labor” (RETL).  RETL is an administrative punishment, not a criminal one and has become an important tool of the Chinese government to suppress dissent.  Even if China amends its criminal laws to be more in line with international standards, as long as it keeps RETL, the CCP will always have a way to suppress those individuals it deems a threat to its rule.  Individuals like Liu Xiaobo.

But Liu’s current trouble stems from a document he helped author in late 2008 known as “Charter 08.”  Modeled after Charter 77, the document that sparked the Velvet Revolution in Czechoslovakia, Charter 08, called for greater human rights in China, the end of one-party rule and an independent legal system.  The morning that Charter 08 was to be posted to the internet, Liu was detained by police.  Liu was eventually arrested, tried and in December 2009, sentenced to a harsh term of 11 years.  In general, the average dissident sentence in China is between 3 and 5 years.

Given Liu’s current imprisonment doe this Nobel Peace Prize even matter?  Most certainly.  First, it brings attention to the weakness of the current Chinese regime. While most news stories in the Western press discuss China’s growing economic might and its increased military muscle and portray a China that is sure to achieve global dominance, Liu represents the very real flip-side of that story – a communist party that is increasingly fearful of any threats to its authority and that in many ways is retaining one-party rule on a shoe-string.  Second, the Nobel Peace Prize was awarded to Liu after vigorous protest and threats from the Chinese government.  In fact, the Chinese government’s response has been shockingly quick – issuing a statement that Liu is a criminal and awarding him the prize is in contravention to the mission of the Nobel Committee.  Given that many governments have shirked from confronting China on its recent suppression of rights activists for fear of upsetting trade ties, the Nobel Committee’s action reflects its commitment to human rights and acknowledges the importance of human rights in Western diplomacy.

But most importantly, the Nobel Committee’s actions will bring greater attention to Liu within China.  Although famous internationally, with media and internet censorship domestically, many Chinese are unfamiliar with Liu and his quest for greater human rights.  While censorship of the awarding of the Nobel Prize to Liu will surely exist in China, because this news is so huge, stories will slip through the Great Firewall, and those Chinese with access to the internet will learn more of Liu’s work and the push for human rights in China.

But the award does not come lightly.  If history is a guide, the Chinese government will likely increase repression on other rights activists in China in the immediate aftermath and abuse of Liu in prison is a very real possibility.

And from the White House and last Year’s Noble Peace Prize Winner:

Office of the Press Secretary

I welcome the Nobel Committee’s decision to award the Nobel Peace Prize to Mr. Liu Xiaobo.  Last year, I noted that so many others who have received the award had sacrificed so much more than I.  That list now includes Mr. Liu, who has sacrificed his freedom for his beliefs.  By granting the prize to Mr. Liu, the Nobel Committee has chosen someone who has been an eloquent and courageous spokesman for the advance of universal values through peaceful and non-violent means, including his support for democracy, human rights, and the rule of law.

As I said last year in Oslo, even as we respect the unique culture and traditions of different countries, America will always be a voice for those aspirations that are universal to all human beings.  Over the last 30 years, China has made dramatic progress in economic reform and improving the lives of its people, lifting hundreds of millions out of poverty.  But this award reminds us that political reform has not kept pace, and that the basic human rights of every man, woman and child must be respected.  We call on the Chinese government to release Mr. Liu as soon as possible.