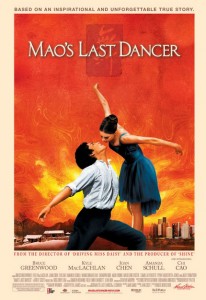 tells the true story of ballet dancer Li Cunxin’s defection to the United States in 1981.  The film is fairly average, not particularly well-acted (aside from Bruce Greenwood who plays the complex character of Houston Ballet choreographer Ben Stevenson and does a superb job) and at times way too dramatic.  Joan Chen makes an appearance as a poor Chinese peasant, raising seven sons in the stark mountainous countryside of Shangdong province, and of course, looks as beautiful as ever.

But the movie is not a complete wash out in that it takes a snapshot of a very important time in U.S.-China relations and tells the story of a tense 21-hour period in this new-found relationship.

The film opens in Li’s impoverished home village outside of Qingdao, Shangdong Province.  It is 1972, the height of China’s Cultural Revolution, socialist rhetoric is running high and Li is 11 years old.  When Party officials visit his mud-walled school, Li is selected for a competition in which the winning students will be sent to Beijing to study.  It’s not until the next day, when Li is asked to do various tumbles, twists, and handstands that his family finally realizes he has being selected to attend the Beijing Dance Academy.  The director, Bruce Beresford (Driving Miss Daisy), does a great job of distinguishing the feelings of the two generations – Li’s parents want him to go to Beijing because they know that this will offer their son a better life; Li goes because he feels a sincere sense of obligation to his motherland.  And that is what is great about this movie – in a very nuanced way it shows the sincerity of the young people’s belief in the teachings of the Cultural Revolution.  Li was born on the eve of the Cultural Revolution and his whole life he has been indoctrinated with its teachings and has come to believe them.  No other movie I have seen about the Cultural Revolution has been able to effectively capture this subtle fact.

Fast-forward nine years (note: plot spoiler!) and Li is a star.  At least in China.  He performs twice for Chairman Mao’s wife, Jiang Qing, and when Ben Stevenson arrives as part of the various “good will” cultural tours immediately after China and the U.S. normalized relations, Li is the only dancer he considers talented.  As a result, Stevenson invites Li to study in Houston as an exchange student for six weeks in the summer of 1981.

Ensues are various skits about Li adjusting to American life – the usual “look how different America is from China”, “look at the extravagant Americans” scenes.  But eventually Li becomes a star, performing the lead role in one of the Houston Ballet Company’s premier summer events.  Li also begins dating one of the American ballerinas.  Needless to say, Li doesn’t want to go back when his time has come but because the Chinese government fears that Li is getting too soft, does not allow him to extend his visa.

Li speaks to a lawyer (played very well by former Twin Peaks star Kyle MacLachlan) about his options, and (note: plot spoiler!) rushes into a hasty marriage to his American girlfriend.  When he goes to tell the Chinese consulate, he is kidnapped and held in the consulate for 21 hours. With the help of his attorney and the Department of State, Li is eventually freed but informed that he has been stripped of his Chinese citizenship and will not be permitted to ever return to China.

And this is where the movie gets weak.  We are never told what propels Li to choose America over his family.  How was he able to so easily break with the Communist rhetoric that he had learned his whole life (when he first shows up to America, he is constantly wearing his Mao pin)?  Aside from having sex with his girlfriend, we never see Li getting close with anyone in America.  How did he leave his whole family?  Was it just his youth?  There is so much here that the director could have easily used to better explain Li’s choice.  Instead, it seems to be a mechanical decision and on some level plays on the Western bias of “well of course he would want to live in the West.”  It wasn’t until I got home, researched Li Cunxin and read excerpts from his autobiography that I learned that his rejection of the Communist teachings was actually an important part of his decision. 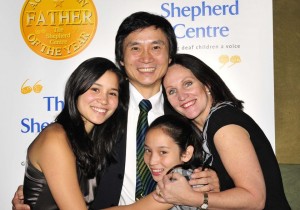 The real Li Cunxin with his wife and two daughters. All live in Australia.

But even in light of that, being reminded of the relationship between China and the U.S. soon after normalization in 1979, is an important thing, especially for younger China watchers.  China did not really enter my orbit until the early 1990s.  And by then, it was a very different China.  Seeing a China just entering its Reform & Opening period, and watching the U.S. and China (note: plot spoiler!) coordinate efforts to reunite Li with his parents at one of his performance (note, melodrama runs high in this scene) reminds us of a time when symbolic good-will gestures between the U.S. and China helped move a relationship forward.  How times have changed.

For the historical value, for some of the nuanced scenes of political indoctrination, Bruce Greenwood’s performance, and for the scenes filmed in China, it is worth watching.  But wait till it comes out on DVD.

This movie is now available on DVD: Mao’s Last Dancer

Leave a Reply to Welly