Will China Float its Currency? 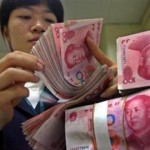 Will China allow its currency to float?

As Marcy Nicks Moody pointed out in her article, “A Dusty Springfield Approach to the Chinese Exchange Rate,” the Treasury Department was to release its report on international economic and exchange rate policies on April 15.  But last week, Treasury Secretary Tim Geithner announced that he would delay the release of the report  noting that key meetings with world leaders in the upcoming months necessitated the delay.  Many saw this as a sign that the U.S. was in dialogue with the Chinese about the exchange rate with the real possibility that China would give its currency some freedom.

But in today’s New York Times, Michael Wines reports that perhaps we shouldn’t be so sure.  Domestic fiscal and monetary policy issues are pushing Chinese leaders not to float the yuan, Chinese currency (a.k.a. the renminbi or RMB).  Interestingly, the online version of this article has the title “China’s Recovery Keeps Focus on Interest Rates and Currency” while the title in today’s paper version is the more explosive “China Move on Currency Not at Hand.”

So will China succumb to foreign pressure or will it remain focused on its own recovery and not look to change its currency policy just yet?  You decide.  Take our poll on this issue listed on the left hand side of the website.  Results will be posted next Friday, April 23.

2 Responses to “Will China Float its Currency?”