Obama’s Town Hall in Shanghai – Reading Between the Lines 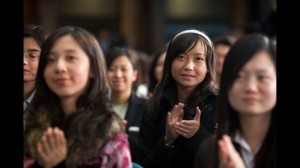 Beijing, China – With scripted questions from the audience and a speech lacking particulars, President Barack Obama’s Shanghai town hall on Monday likely looked like a flop to the American audience. At the very least, it was a far cry from the free-wheeling town halls during Obama’s primaries and general election battles.

But this is not Iowa or Virginia. This is China, where the concept of the people questioning their leaders, holding them accountable or even talking directly to them is so foreign that there isn’t even a word for it. Monday’s event was translated as “mian dui mian” or face-to-face, which seems more apt for a talk show than a discussion with a world leader.

The very fact that President Obama was able to host a town hall in China should be viewed as a huge accomplishment. But more than anything, the town hall should be seen as a coming attraction of the new Administration’s China policy and China’s likely response. Below are some important takeaways from President Obama’s Shanghai town hall.

Takeaway #1 – Hosting a Town Hall in China is, In and of Itself, a Success
Town halls just do not happen in China. In an authoritarian state, there is little need for the leadership to answer directly to the people. This is not to say, however, that China’s top officials are completely immune from the citizenry’s complaints. The fact that, after extensive uproar in online chatrooms, the Chinese government lifted its requirement to install the spyware software Green Dam on every computer, shows that it sometimes does respond to public demands, albeit in a rather circuitous way. But direct accountability or accessibility is not common.

But while the Chinese leadership would prefer to keep it this way, it is questionable if the Chinese people will continue to agree with this approach. Premier Wen Jiabao’s (pronounced When Geeah-bao) popularity among the Chinese people is unparalleled precisely because he has been more accessible and accountable (In January 2008, Premier Wen, after a fluke snowstorm in the south shut down the railroads, went to various train stations to apologize to the millions of people stranded during the Chinese new year festival).

Thus at such a critical juncture, President Obama’s town hall provides the Chinese people with a look at an alternative form of leadership. What’s more, President Obama chose to speak to the young and educated, the segment of society that likely feels the grip of the government the most and likely the most idealistic for change. It is no wonder that the Chinese side gave a tremendous amount of push back to the President’s request for a town hall, only agreeing to it a few days before the event. In a relationship where it is often just best to lead by example, a town hall with the President of the United States is perhaps the best example of accountable leadership. 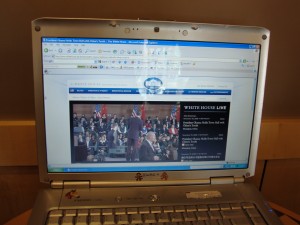 broadcast the event on the government run China Central Television (CCTV), and then reneged last minute on broadcasting it live on the Xinhua News Agency’s website (the Beijing morning papers on Monday all reported that the event would be broadcast late that morning live on Xinhua’s website). Even clips of the town hall have not been shown on Chinese evening news. Ultimately, the event could only be watched through the White House’s website, giving only those Chinese people who know there is a White House website access to the event (Youtube is a blocked site in China).

In 1998, when President Bill Clinton visited Beijing, his speech to the students of Peking University received top billing from the Chinese government. The state-run media discussed his Peking University appearance for days prior and the speech was broadcast live on CCTV as well as on radio. Additionally, President Clinton appeared on a radio show in Shanghai to answer questions directly from call-ins.

So why the change? Is it that the Chinese government fears Barack Obama’s popularity more than Bill Clinton’s? Maybe, but not likely. President Clinton was very popular in China during his presidency and remains extremely popular today. In some ways, President Clinton’s speech at Peking University focused more directly on the need for greater human rights in China than even President Obama’s recent town hall. 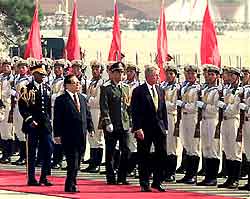 The change has more to do with the Chinese government’s increasing ambivalence toward moving forward on the fronts of access to information, development of a civil society and greater political freedom for its people. By now, the Chinese Communist Party (CCP) must realize that greater independence for its people means less control for them; the CCP remains afraid to give up this control and not just for selfish reasons. For the past 30 years, this control has enabled the Chinese government to lift hundreds of millions out of poverty, better the lives of a billion people and in record-breaking time become an economic power horse. Its formula has worked, there is no doubting that. But as its growth plateaus, which it inevitably will, as the gap between rich and poor continue to grow, and as certain segments of society press for greater freedoms, whether the CCP can continue with the current ruling philosophy of control remains to be seen.

Takeaway #3 – Obama’s Human Rights Agenda – It’s There but It’s Not What You Think
This brings us to the third and final takeaway from President Obama’s town hall – where the Administration stands on human rights in China and what the U.S. should being doing to promote these rights. 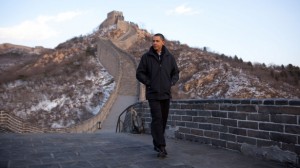 In terms of human rights, President Obama discussed the source of America’s core values, the positive results of such core values to the American experience, and stated that he believed some of these values are universal. However, his focus on the American context of these values belied their universal nature. Many of the values President Obama listed, such as freedom of religion and of expression, are protected by the Chinese Constitution; the difference lies in each countries’ restrictions. President Obama likely could have made a stronger case for these principles’ universalities by pointing to the fact that China itself has stated its commitment to these values, but still has a ways to go to get there. In his speech in 1998, President Clinton did an excellent job of citing to the revered Chinese political philosopher Hu Shi (pronounced Who Shi) in his call for greater democratic freedom.

But in terms of specifics, President Obama went for a decidedly more modern human right – freedom of expression on the internet. First, some background. When the U.S. and China agreed to have a town hall, knowing that the students present at the town hall would likely be hand-selected by the government and would have scripted questions, the U.S. side requested that questions be submitted via the internet. The Chinese side agreed and Xinhua News Agency opened its website to questions for President Obama. However, internet chat rooms are often no less scripted in China, especially for politically-sensitive matters. The CCP hires a large number of people to police these chat rooms and steer the discussion in a direction more agreeable to the CCP.

And that is where the U.S. found itself when it allowed Xinhua news agency to organize the internet questions, a discussion of soft-ball questions like what was it like to win the Noble Peace Prize. As a result, the U.S. Embassy began its own webpage, encouraging Chinese people to send in their questions to their unregulated site. The vast majority of these questions pertained to the Chinese government’s censorship of the internet, blocking out politically sensitive information and shutting down social networking sites like Twitter and Facebook (this is not surprising since the Chinese people who knew to access the U.S. Embassy website are the most internet-savvy and thus likely the most frustrated with the Chinese government’s control.). Ambassador Huntsman’s question about President Obama’s stance on internet censorship came from the U.S. Embassy’s website.

President Obama’s response to the question, while veiled, was shockingly strong. In no uncertain terms, he expressed the belief that a free internet has made America a strong country, made him a better leader, and allows the people to hold their leaders accountable, thus implying that a censored internet has the opposite effect. The implication was likely not lost on the Chinese students.

It appears that the Obama Administration’s human rights agenda for China will focus around internet censorship. The Chinese government has spent a tremendous amount of time and resources in controlling the internet, and has largely been successful at stamping out content it deems objectionable, so it likely did not take too kindly to President Obama’s answer. But will this be enough to help China live up to many of its ideals? Can the internet solely replace the need for a functioning civil society, another area that the Chinese government is clamping down on? Or will it just be a place to shop like it is in many other countries? This remains to be seen. I for one would have very much liked it if President Obama, in answering the question about the path to being a Nobel Peace Prize winner, mentioned his role as a public interest attorney and acknowledged the importance of public interest law to a secure and functioning society. I only hope that this was mentioned at the very least behind closed doors in his meetings with President Hu.