The U.S.’ Willy-Nilly Legal Development Policy in China – Times Are A Changin’?

I wholeheartedly agree with Prof. Stanley Lubman’s recent call on the Obama Administration and Congress to provide

more funding for legal development work in China.  But in requesting additional funding, it is important to ensure that such funding is provided in the way best able to achieve results.  Current U.S. development policy could do a better job at this.

The amount of government funding to legal projects in China is a small fraction of the funding for similar projects in places such as Iraq. While the development of a functioning legal system in Iraq is an important goal, in some ways it is even more critical for China.  China is already one of the largest economies in the world with influence that far extends beyond its borders and even beyond Asia.  With the world’s increasing interaction with China, a legal system that functions in China is essential for its relations not just with other countries, but with its own people.

But in increasing the amount of aid for China’s legal development, it is also important that the U.S. seeks to distribute that aid in the most efficient way.  Prof. Lubman correctly points out that to effectively assist China with its legal development, the U.S. must not preach to China and should not ignorantly call for the all out adoption of Western values by China.  Instead, it is important to look to areas of legal reform, like environmental law, administrative law, and open government policy, that the Chinese government has willingly begun to move forward in.

But state-side, the U.S. needs do more as well.  Currently, various U.S. agencies, committees and other government bodies, with little to no coordination, provide funding to multiple NGOs and academic institutions doing legal development work in China.  This has caused the U.S. approach to legal development in China to be less one of strategy and more one of “throw anything against the wall to see what sticks.”

Apparently, this is a problem throughout the development field in the U.S.  Both the White House and the State 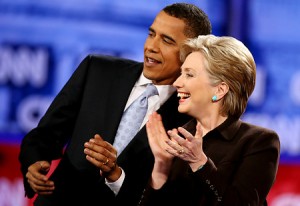 Dueling Directives between the White House and State or Friendly Competition?

Department are currently undertaking in-depth studies to reorganize and revitalize the U.S.’ global development policy (the White House called for a “Presidential Study Directive” on the issue on August 31, 2009; the State Department began a “Quadrennial Diplomacy & Development Review” on July 10, 2009.  Both reports should be issued in the next month or two).

While flexibility is important and to some degree should remain, with China, a better organized effort on the U.S. end is necessary.  Prof. Lubman has called on President Obama to discuss with President Hu Jintao a U.S.-Chinese program on legal issues.  If this does come to pass, this could be the perfect opportunity for the U.S. to coordinate across various agencies and governmental bodies its legal development work in China. The U.S. side of such a program should not just serve as a representative to China on the U.S.’ legal work there, but should also serve as the creator of a coherent China legal development strategy and seek to coordinate that strategy across the various U.S. agencies that provide funding for legal development work in China.