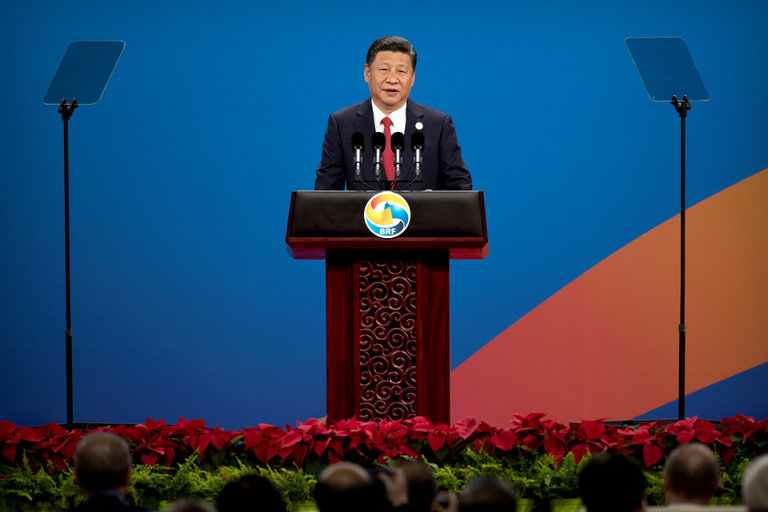 Chinese President Xi Jinping delivers opening remarks at the One Belt, One Road Summit on May 14, 2017 in Beijing (Photo courtesy of New York Times)

For those in the United States who woke up this morning not realizing that China just opened one of the largest trade summits in Asia, you are not alone.  For the American press has barely mentioned China’s “One Belt, One Road” policy, let alone this inaugural, two-day summit of the initiative, with over 1,500 participants and 28 heads of state in attendance.

But One Belt, One Road is not something to be ignored. Although launched only four years ago, it reflects Beijing’s very real ambition to exert its economic influence – if not be the dominating economic force – in Asia, Eastern Europe and Africa.  It also reflects the historical legacy of China’s Silk Road – a trade route between Europe and China that emerged as early as the Qin Dynasty (221 – 206 B.C.) and flourished during the Tang Dynasty (618 – 907 A.D.).  It was the Silk Road that resulted in China becoming the economic and cosmopolitan superpower that it was during those time periods.  China’s current One Belt, One Road initiative seeks to replicate that route, creating a modern day trade route over land from Beijing to Europe.  But it also calls for creating a maritime trade route around South Asia to the east coast of Africa and the Middle East.

However, unlike the ancient Silk Road – where trade flowed in and out of China – with One Belt, One Road, China’s intention is predominately for trade to go out. As Peter Cai of the Lowry Institute argues in his report Understanding China’s Belt and Road Initiative, in many ways, China’s geostrategic interests – that it seeks to be the new global superpower over the United States, with control of key trade routes – are secondary to its domestic economic motivations for One Belt, One Road.

First, Cai highlights that the economic inequality between rich, east coast cities (think Shanghai, Guangdong, Xiamen) and China’s hinterland are at almost crisis levels.  But One Belt, One Road – with its reorientation on trade moving West – would focus on these land-locked, poorer cities and provinces like Gansu, Xinjiang, and even some of the less rich provinces of China’s northeast.  According to Cai, these areas are all competing to borrow money at low rates under the One Belt, One Road to build its infrastructure in anticipation of these new trade routes.  There is a reason why Lanzhou, in what feels like the middle of nowhere China, has one of the fanciest airports in the country. 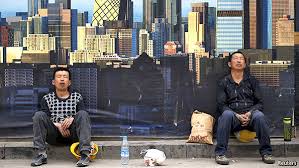 Economic slowdown in China? (Photo courtesy of the Economist)

China’s second domestic economic motivation for One Belt, One Road is the fact that with economic slowdown recently, key industries such as steel, coal and construction, have excess capacity.  These are the same industries that took a lot of loans from the central government to get through the global financial crisis of 2008, loans that may not be re-payed if China’s economy stays where it is.  One Belt, One Road however, is a way to escape this conundrum.  But not just by selling steel or coal or cement abroad.  Instead, as Cai points out, China intends to actually move the production facilities to these other countries.  This would allow China to rid itself of a supply glut while providing less developed countries with manufacturing facilities that can help with their own economic development (although they will likely still be Chinese-owned).  In some ways, a win-win for China and these other One Belt, One Road countries. China has already moved some factories abroad, such as this garment factory which was moved from China to Ethiopia where labor is cheaper. (Photo courtesy of Daily Mail/Getty Images)

And at the same time, by moving factories abroad, China will be able to refocus its economy from a low-end manufacturing country to one that can promote innovation and technological development.  With China as the key innovative country in the region, it can then use One Belt, One Road, to promote its new technologies – like the high-speed railways it is building in various African countries and Southeast Asian countries.  With all these countries being on the same railway system only deepens the trade partnership and economic integration with China.

While the United States turns inward and gets bogged down with needless political crises, One Belt, One Road is in many ways a genius strategy for China.  It gets itself out of its own economic straights, it ensures global integration in Asia, Eastern Europe and Africa with China at the center, and enables China to exert greater and greater global influence. The Silk Road of the past – when camels roamed

But, while China has pledged $1 trillion to One Belt, One Road, much of that money has yet to be spent.  There is also the gamble of the Chinese government’s very deliberate and planned approach to developing this trade route: it does not enable Chinese companies themselves –companies who are best able to determine the risk in their industries and in the countries where China wants them to invest – to make their own decisions.  But as Elizabeth Economy, the Director for Asia Studies at the Council on Foreign Relations (CFR) noted at a CFR event the other week, if fully realized, the One Belt, One Road initiative will fundamentally restructure the political landscape for over a third of the world.

But if all you do is read the U.S. press, that fact could just pass you by.