State of the Union & China

State of the Union addresses are mandated by the Constitution, and like most requirements in life, are often dull. 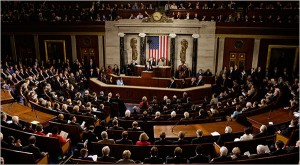 The speech usually turns into a laundry list of the President’s priorities with little rhetorical flair.  Often the most exciting part is when the TV cameras pan the audience and catch Senators and Congress members misbehaving.  This year it seems as if everyone Congress member was “tweeting” on their blackberry.

So to spice it up a bit, we at China Law & Policy decided to analyze President Obama’s first State of the Union address in terms of China.

Not surprisingly, President Obama’s speech focused mostly on the domestic agenda.  But China was mentioned twice, although both times only briefly.   China was first mentioned in regards to the technology behind its fast trains.  Similarly, when President Obama brought up China a second time, it was in regards to its technological advancement and that the U.S. must not fall behind.  In both instances, China was used more as a foil than anything else.

More compelling were the points when China wasn’t named but perhaps should have been.  In terms of trade partners, President Obama stated that he wanted closer ties with Panama, South Korea and Colombia.  But this is likely less of a snub to China than the fact that the Obama Administration is waiting on Democrats in Congress to approve free trade agreements with these three nations.

China was also absent when President Obama discussed the nuclear threat from both North Korea and Iran.  In fact, no other nation was mentioned and while President Obama was very forceful in threatening the two countries with increased sanctions, his actions appeared rather unilateral.  This is in contrast to his predecessor; in George W. Bush’s 2003 State of the Union address, the President specifically mentioned China as necessary to reach a peaceful solution on the Korean peninsula.

Does this mean that the U.S. is not receiving China’s support on this front?  It’s hard to tell.  Given the American public’s focus on the economy, health care and the corruption culture of Washington, it’s not surprising that President Obama’s speech had very little focus on foreign policy.  To draw any conclusions from the little he did say is speculative, but at the same time is something to be aware of and to watch.