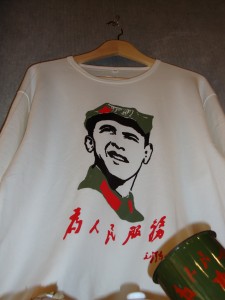 Beijing, China – A certain excitement has lighted the streets of Beijing in anticipation of President Barack Obama’s maiden visit here this week.  Not only has the capital experienced two days of clear blue skies, a rarity in a city that is usually encased in a yellow, gritty smog during the cold winter months, but there is an electricity in the air as everyone discusses President Obama’s visit – from the formal news casters on TV analyzing the potential agenda to the famously earthy taxi drivers complaining about the potential traffic nightmare.

But like President Obama’s fan base back home, the young in China are especially keen on his visit.  And the President is acutely aware of this fact.  On Monday, his first day in China, President Obama will meet with a group of Chinese college and graduate students in Shanghai, to listen to their opinions and answer their questions.  What do these students think of President Obama?  What questions or recommendations will they have for the President?

In talking to a group of graduate students from the China University of Political Science and Law, one of Beijing’s most prestigious universities, President Obama’s rise to power has filled them with the hope that the impossible, or at least the improbable, is achievable.  “He gives young people encouragement.  If you work hard, you can obtain a high position….it’s the American Dream.” said Xie Jinbao (pronounced Syeh Gin-bao).    “For many, it is very dream-like” explained Liu Huisheng (pronounced Leo Hway-sheng), while cautioning that only those who care about politics have been paying attention.  “In general though my friends are neutral [about President Obama].”

In pinpointing the source of this hope, the Chinese students spoke more frankly than their American counterparts on 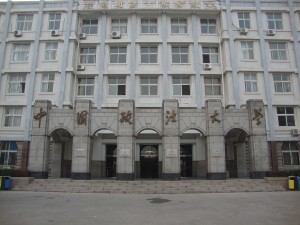 For the students, many who have little recognition of a world before President George W. Bush, President Obama represents a new approach to the global order, an approach that they eagerly look to be a part of.  “He is much better than Bush” Xie Jinbao said.  “Bush believed in unilateralism, but Obama supports multilateralism.”  At a time when many western observers question China’s commitment as a collaborator on the world stage, Li Siwei (pronounced Lee Tsi-way) seemed to imply her generation’s eagerness for greater responsibility: “Obama is willing to work with other countries, there will be more cooperation.”

But even though the term superstar was used repeatedly to describe President Obama and student Liang Xuanjing (pronounced Leeang Syuan-jing) was in awe of President Obama’s charisma, there were words of caution.  “Confucius had a saying ‘If a person is too perfect, we will have doubts’” Liu Huisheng said, noting that perhaps President Obama’s speeches are a bit “too perfect.”  Dong Jianjun echoed this sentiment: “Compared to presidents like Roosevelt or Kennedy, Obama has similarly great charisma…but we have yet to see if his [Obama’s] policies will be effective.”  Like many Americans, these Chinese students are looking for President Obama to follow through on the promises of his speeches.  In a relationship as close as the one between China and the U.S., President Obama’s actions, or lack of action, directly impact China and many of these Chinese students’ futures.

Not surprisingly though, many of the topics that the students would like Presidents Obama and Hu Jintao (pronounced Who Gin-tao) to discuss are the same as their U.S. contemporaries – international trade and the ever escalating tariff war topped the list for these students.  But so did the issue of climate change and energy efficiency as well as the economic recovery.

China’s youth are not that different from the young back home – they share the same hope that Presidents Obama and Hu can make the world a better place and they express an eagerness for a new world order where the U.S. and China can work through their issues.  But like their American brethren, if Presidents Obama and Hu cannot solve many of today’s problems, including the economic crisis, climate change, and an increasingly cantankerous trade relationship, it will be their generation that will be left holding the bag.